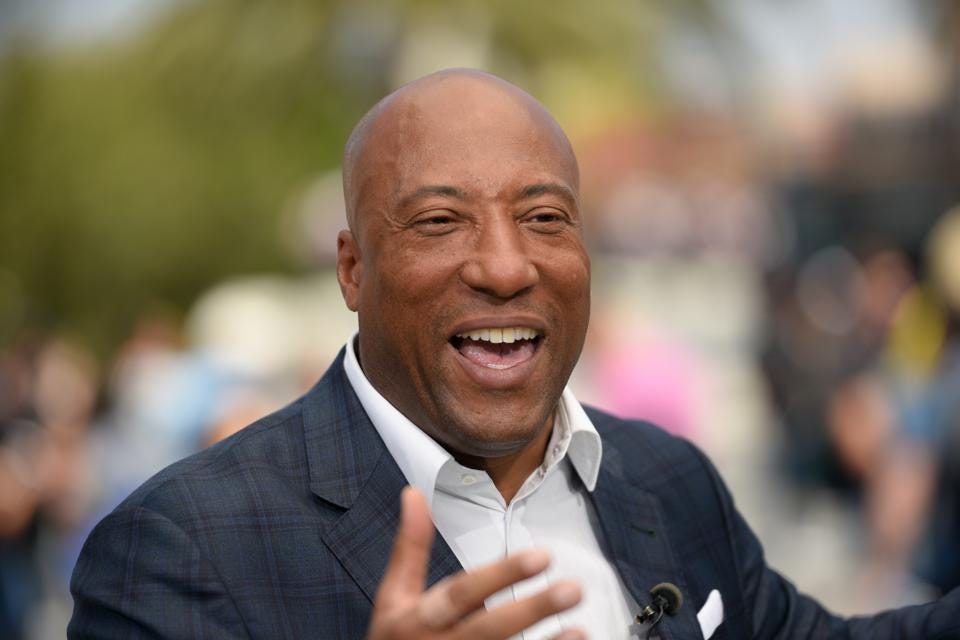 The forecast for Byron Allen is big.
Media mogul and billionaire ‘s Entertainment Studios purchased The Weather Channel in 2018, making Allen the first African American to own a major cable outlet. Entertainment Studios is also the parent company of theGrio.
Recently, Allen says he welcomes the competition from fellow mogul Rupert Murdoch, who is set to debut a 24-hour streaming channel Fox Weather later this year.

“As an African American man hopefully I’m bringing more attention to climate and environment,” Allen told theGrio’s Natasha S. Alford, Vice President of Digital Content and Senior Correspondent for theGrio, in 2019.
“Rupert Murdoch is very smart; he is the best of the best,” Allen said in an interview with the New York Times. “I am not surprised he’s coming into the weather space. Honestly, I would have been disappointed if he didn’t.”
“Now the world will understand how big of a business the weather business is and how important it is.”
“The Weather Channel has been voted the most-trusted news brand in America for eleven consecutive years, and the fifth most-trusted brand in America overall, which makes it the perfect brand for a direct-to-consumer streaming platform,” said Allen, Founder/Chairman/CEO of Allen Media Group, in a statement.

“We’ve aggregated some of the best news and entertainment content while keeping it affordable and accessible at the same time. We are highly confident that consumers will enjoy The Weather Channel Plus streaming service for decades to come.”

“It doesn’t take a rocket scientist to figure out that climate change and the environment will be the story of the next decade,” said Jay Sures, a co-president of United Talent Agency who oversees The Weather Channel’s TV division.
Allen made similar comments earlier this year at the virtual TCA session about the existential threat of global warming not being taken seriously enough.

“The Weather Channel had a way of making sure that they didn’t offend folks, and they would never talk about climate change and global warming, because there were some people who said it wasn’t happening, and some people said it was happening,” Allen said.

“I’m going to go with the scientists, because people don’t truly understand that climate change and global warming is the greatest threat to human beings on planet Earth. We have to inform folks so we can help save their lives. I mean, it actually means you’re going to die.”

The Weather Channel Plus is expected to launch in the fourth quarter of this year. Thirty million subscribers are projected in the first five years of this initiative. According to the Times, viewership at CNN, MSNBC, and Fox News took a dive during the first half of 2021, while the Weather Channel’s audience increased 7 percent.
Meanwhile, Weather Channel’s Nora Zimmett, the network’s chief content officer, hit Fox Weather with a bit of shade.
“I applaud Fox getting into the weather space, but they should certainly leave the lifesaving information to the experts,” said Zimmett, who worked at Fox News in the 2000s.

A Fox Weather spokeswoman clapped back, stating: “While the Weather Channel is focused on trolling FoxNews.com for unrelated stories, Fox Weather is busy preparing the debut of our innovative platform to deliver critical coverage to an incredibly underserved market.”

This article was developed by theGrio’s Stephanie Guerilus’ report.