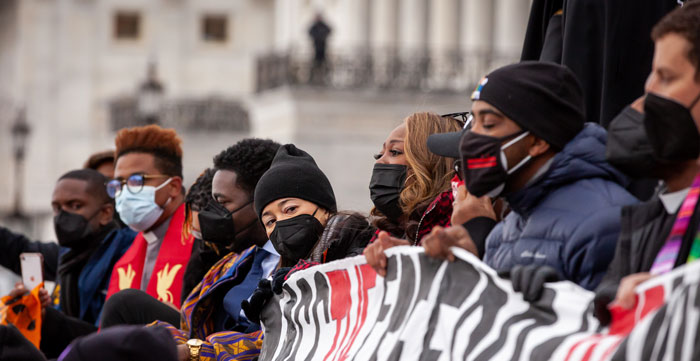 Can Senate candidates Mandela Barnes and Malcolm Kenyatta
Save the Biden-Harris agenda?

President Biden and Vice President Harris’s legislative agenda is at the mercy of Sens. Manchin and Sinema. Senate candidates Malcolm Kenyatta and Mandela Barnes could change that if elected.

On the heels of a stunning demonstration of party disunity among Democrats on Thursday and near certain defeat of the imminent U.S. Senate vote on a voting rights bill as consequential as the Voting Rights Act of 1965, the people of Pennsylvania and Wisconsin may have the opportunity to send a needed lifeline to Washington to shift the ideological chasm and resuscitate the languishing Biden-Harris White House legislative agenda.

“If we don’t get it done, then we have to get more votes in the Senate that can meet the moment that we’re in right now. We need to get to a point where there are more Democrats who care about protecting our democracy,” Pennsylvania State House Representative Malcolm Kenyatta told theGrio.

Kenyatta is running for the U.S. Senate seat up for election in the Keystone State.
“If folks like Senator Sinema aren’t willing to do the right thing, then we are going to need to get more votes to make sure that her intransigence doesn’t rule the day,” he said.

Kenyatta and Wisconsin Lt. Governor Mandela Barnes, who is also aiming to be elected to the Senate in this year’s 2022 midterm elections, would be only the second and third millennial ever elected to the United States Senate, following the election of Senator Jon Ossoff (D-Ga.) one year ago.

“We have to reimagine how we follow the will of the people and how we not only protect but expand democracy. We can bring new leaders who don’t come from rich ivy league schools or wealthy families,” said Quentin James, founder and president of The Collective PAC, whose mission is to build Black political power.

“These folks are going to bring a different perspective into this chamber of government, but ultimately, we’re looking to change the institutions so that democracy can flourish because right now it’s not.”
If these two young, gifted, and Black rising stars in the Democratic Party closely aligned with the working class, clench what may be a hard fought victory in the fall, 2020 voters may get a fresh shot at the transformative change they hoped for in the darkest days of the pandemic.

“They [Lt. Governor Barnes and State Representative Kenyatta] would begin to restore confidence amongst parts of the democratic coalition that do not feel represented and did not feel prioritized,” Terrance Woodbury, CEO & founding partner of HIT Strategies, told theGrio.

“You know, it is quite remarkable that 56% of Black voters under the age of 50, feel like Democrats take their votes for granted. Adding these young, Black millennials to the U.S. Senate begins to give representation to voters and not just voters in Wisconsin and Pennsylvania.”

Woodbury added, “What AOC represents in Congress is not just the 350,000 constituents in her district, she represents a growing urgent progressive wing of the party far beyond the limits of her district in New York. And that’s what Democrats have to start taking advantage of, is that as the big tent party representation is not just geographic; representation is demographic, it’s ideological, and bringing in these diverse new Senators would help them reach voters that currently feel taken for granted.”

The potential for mass disenfranchisement will effectively make the efforts of Barnes and Kenyatta — and every high-potential candidate like them — more difficult in the absence of federal action.
“We are facing unprecedented attacks on our fundamental right to vote everywhere — this will impact every election for every candidate. This is bigger than just my race. Right here in Wisconsin, cynical politicians are trying to rig the system so they can pick their voters, instead of allowing voters to pick their politicians,” Lt. Governor Barnes told theGrio.

“My opponent, Senator Ron Johnson has called for a partisan takeover of our elections. We’re even seeing partisan politicians making it a crime to hand bottles of water to voters waiting in long lines at polling locations. We have to act now.”
“Voting rights are one of the most important things that voters of color are demanding that our leaders get done in Washington. And if that doesn’t get done, I worry about that leading to a lot of people throwing up their hands and staying home,” said Pennsylvania State Rep. Kenyatta.

“And if that occurs, we could lose the governor’s mansion and may lose the Senate seat here in Pennsylvania. We cannot afford for parts of our coalition to be out of the game because they’re pissed off about our inability to deliver.”

Ending the filibuster has become the gateway to the legacy building legislative agenda of President Joe Biden and Vice President Kamala Harris. Their agenda hangs in the balance at the mercy of Sen. Joe Manchin (D-W.Va.), Sen. Kyrsten Sinema (D-Arizona), and 50 Senate Republicans steadily resisting the President’s reinvigorated push to pass a voting rights bill.

“I think because of the lack of diversity, both gender, race, sexuality, all of it in the Senate, you have this old white, male, and stale politics that are at play. That’s really what the filibusters is about. It is keeping with tradition founded upon white supremacy and slavery,” said James.

“To have a majority of senators at this point not willing to reform it to pass a bill like voting rights, it is a sign that the institution is not just out of step with where the country is and where the majority American people are, but where our democracy should be.”

The Barnes and Kenyatta Senate campaigns represent either the prototype or moonshot at winning back Black and millennial voters in order to maintain, if not strengthen the Democrats grip on the Senate — especially in light of legislative losses on voting rights, policing reform, Build Back Better. Candidates like Barnes and Kenyatta can also help Democrats on their ideological message as it relates to Black male voters.

“I had focus groups last year with Black voters, oftentimes Black men who were at risk of defecting to the Republican party. When I would ask them, why were they less likely to vote for Democrats or why they were more likely to vote for Republicans, sometimes — not all times — it was because of ideological reasons,” said Woodbury of HIT Strategies.
“It was because the party had gone too far left, or because they didn’t understand what was so wrong with the wall, along the border.

Woodbury added, “They didn’t understand what was so wrong with the gendering bathrooms. And so that’s why I’m very cautious that, if they don’t agree with us on every single issue that does not mean they are not our voters. It means you have to do a better job of messaging these issues to them end-to-end, to bring them along with us on this ideological journey.”