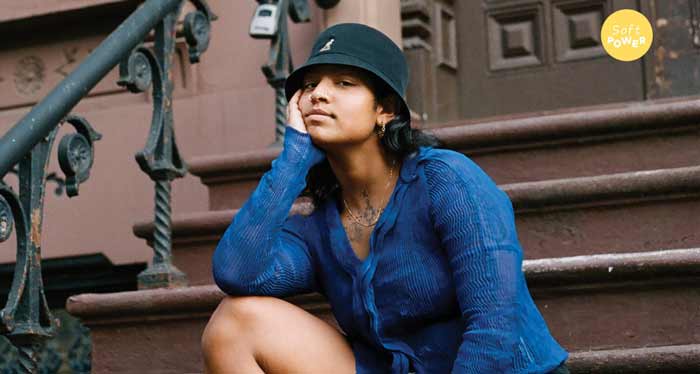 We’ve often passed the Playground Coffee shop while biking down Bedford Avenue, but only learned of their impact in the community when an article in Brooklyn Patch reported on the over $50,000-plus the company has received in an outpouring of community support.
In the article seen below, Published on October 18, 2020 by softpowervote, we understand how that support was earned.
Zenat Begum is a first generation Bengali-American born and raised in Brooklyn. She opened Playground Coffee days after Trump was elected President, motivating Begum to create a safe, creative, and community-oriented space. What was her father’s hardware store for two decades, Begum has wielded this space into a movement that serves community youth, collaborates with non-profit art organizations, and in the times of COVID-19, pivoted to launch a full on community fridge program to feed her neighbors. Over the summer of 2020, Begum and the Playground Coffee Shop community debuted a free lending library composed only of BIPOC and queer authors. Playground has become a model for community-oriented business, and Zenat exemplifies what is to be expected of the next generation of young business owners.

When did voting become important to you?
I think voting is really important and I voted for Obama in his second term, which I was really stoked about. It became evident that I needed to vote when my mom began working at the poll sites. Seeing an immigrant woman who doesn’t know how to communicate that well in English, going to a poll site to teach Americans how to vote, white Americans, was enough for me to say, okay, I’m going to start voting—I’m going to start helping my mom. My mom has worked every single election, and we have worked polling sites since I was eighteen.
Seeing someone in my age bracket helping at the polling sites was interesting. Polling machines always crash, and need a lot of support. If young people can be there and help with the technology that there, this shit flow a lot easier for everyone.

What do you tell your friends who are hesitant to vote?
Being able to express our concerns for freedoms that we need in our lifetime is important. You can help our future and our children’s future. Women couldn’t vote until 1920, but that was only white women. In thinking about women of color—we were not born free, we had to fight to have our ideas be represented in Congress and the Senate, and that is powerful. Now we have the right [to vote] and some frivolously toss it around like it’s nothing—there’s not going to be change if we don’t vote. White people are voting, why are we not going to vote? This is why we have people like Trump in office. I really wish I could tell people of color and Black folks how important it is to vote.
On the other hand, it’s lazy activism to assume that voting is the thing that saves the world. But when we do show up, and vote in elected officials, like AOC, who is from New York and now sits at Capital Hill—that is change.
For all the times that we’ve had to keep our mouth shut, this is a time for you to speak up. If it means that we have to work a little harder to get this done, let’s do it, because Republicans know how to campaign a little harder than us.

They are not shy about playing the game or for changing the game to benefit them. What method did you vote in the Primary?
I went into a polling site, day of. For anybody mailing their ballot in, always get it out of the way, and send it early, because if it’s not postmarked and it doesn’t arrive on time it won’t count. There are so many loopholes. It’s really important to do your research and make sure you know exactly what to do for this election. There’s so much information and graphics on Instagram, so let’s take the time and absorb this burst of information, and learn how to do that new dance afterwards.

What’s at stake this November and why should young people vote?
Everything: housing, food, equity, healthcare, space. How business owners are going to be able to pay for all of this. Just everything.
It will have an impact on our whole daily lives. Ever since Trump was elected, every time something weird happened, it affected someone I know, myself, or my parents or their family members. Being tight with my community is the most important thing, because if all else fails, I have y’all, and they have me.

What do you listen to in the mornings?
I listen to NPR every morning. I drive a lot, running around between all the fridges aside from getting donations. I also listen to The Daily just to make sure that I’m good. I also love satirical politics and love to watch John Oliver here and there. Sharing stuff between my friends has been really pivotal in the morning, and reading articles on Twitter, but I try make sure that I’m reading real things which is a constant struggle, because I’ve seen a lot of people share things that are incorrect
Did you always think business was synonymous with community and mutual aide work?
We’ve always held space for other organizations; I met you through 8 Ball [Community] and gave them space to do their thing, because it’s all about opportunity. Prior to Playground, no one gave me a chance, no one saw me as an integral part of a movement, and I carry that with me. When you feel lost, and you want to feel carried; what do you do? You create your own spaces, you create your own platforms and you put yourself on. That’s essentially what I had to do.
We’re in a global pandemic where there are a lot of restrictions on us gathering socially, but you have all the tools. People want to do community work, but do you talk to people around you? Do you say “Hi” to your neighbors? To the passer-bys in your life who are part of your community? We are the ones that have to be extroverted and reach out to people to make them feel comfortable. You have to make it a lifestyle or it’s going to feel like a job.
For the first time in my life, people are trusting me with this vision. I’ll continue this kind of work—like the tree branches that spread apart—I want people to know that this is as easy as you want it to be, and as functional as you want it to be.
As they say: when you do what you love, it’s no longer work.
Every day that we sell coffee, we fill the fridge, we’ve embedded this into our process. It’s easier to do daily than to think, “how much am I going to spend on feminism this month?” It has to become an everyday checklist—I brushed my teeth, I donated, I did this. It’s an individualistic idea that we’ve had to kind of institute into our own lives.

Playground used to be your dad’s hardware store. What’s been your family’s response to Playground’s success?
You know, [my father] hasn’t told me he’s proud of me, but I think that is really hard for immigrant parents to admit that they are proud of their children for doing something that isn’t tangible, like earning a PhD. At the end of the day, my ideas have come from being surrounded by my parents and seeing how charitable they’ve been. They are the family that moved to this country, and as a result, they send funds back to sustain the lives of many back home. When my dad opened his hardware store, it was a huge accomplishment for him, as an immigrant to open a business in America—especially in New York, which feels like the epicenter of the world. My dad helped me build Playground from the ground up, and I feel so honored to be able to work with a visionary like him, who has always done things on his own.
(https://softpower.vote/2020/10/zenat/)

Georgia is ground zero for the fight over voting in 2022, and women of color are on the front lines