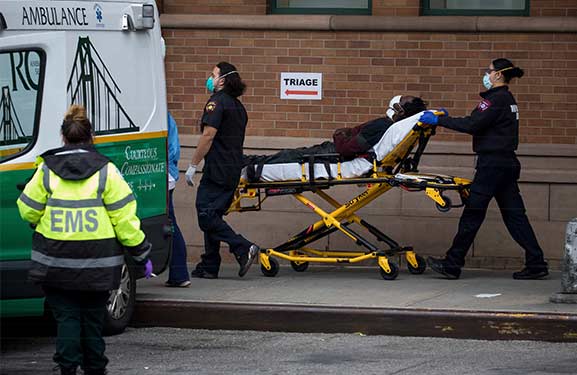 We’ve been in a lot of tough spots as Africans in the Americas, with slavery, lynchings, Jim Crow, criminal justice and the rest. But COVID-19 is taking us out suddenly and in mass. The virus strikes everybody, but it hits the Black community the hardest. By a wide margin. Back on April 8th The New York Times headline was, “Virus Is Twice as Deadly for Black and Latino People Than Whites in N.Y.C.”
And now we see that this is true across the country.
CNN reported on April 6, that in both Chicago and Louisiana, Black patients account for 70% of coronavirus deaths, while only 30% and 32% of the population.
It would surprise no one, if the yahoos protesting social-distancing edicts and demanding the country be “Opened up,” and “liberated” while waving their confederate flags and Trump-themed hats, think of COVID-19 as a cleansing of the country. Getting rid of the Black, Brown, homeless, and jailed populations. Anybody else is just collateral damage in a continuing racial war they are determined to win.
When President Donald Trump says some people said he should let the virus “wash over” the country, he was telling us what he thought. After all, given the demographics of the deaths, it is impossible for a man like Trump to see any downside to opening the country soonest; the earlier the better is okay with him. After all, the election is only six months away.
In an Atlantic article, conservative Republican George Conway wrote of Trump, “The question is whether he can possibly act as a public fiduciary for the nation’s highest public trust…Given that Trump displays the extreme behavioral characteristics of a pathological narcissist, a sociopath, or a malignant narcissist—take your pick—it’s clear that he can’t.” If you think that streak of evil is not possible, you haven’t been paying attention to American history or the president.

What are we to do?
On Wednesday, the director of the Center for Disease Control, Robert Redfield said to expect a “second wave” of the virus in the Fall, coinciding with the regular flu season, to be worse than what we are experiencing now. And at that point we will still be a year away from a vaccine. A year away from the anxiety of “what if,” a year away from any semblance of peace of mind.
In that time, there will be no church, crowded choirs singing and swaying while the congregation laughs, hugs and shake hands all around. There will be no more tables of six at after-service dinners in the church basement or family barbecues in the afternoon.
We will have to deal with this by taking control of what we can. Civic duty has never been more important than now. Wash your hands. Wear a mask. Vote. Respond to the Census. Hold officials accountable to address the racial disparities of COVId-19. Let good health become our obsession. There is no more room for error. We are in this for the long haul.

Death and Other Challenges