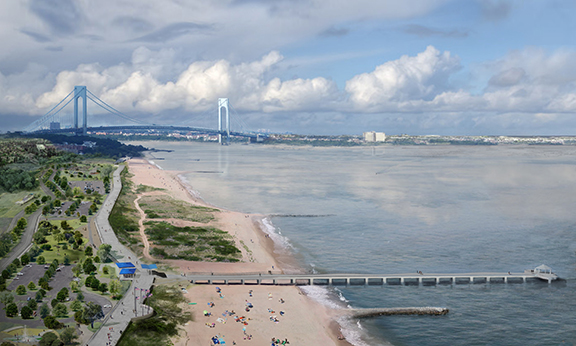 East Shore of Staten Island, New York. At Seaview Avenue and beyond, a new promenade runs along the top of the seawall

Funding for construction of the East Shore Seawall has already been appropriated and authorized by the federal, state and local governments. Last month, Rose toured the site with the U.S. Army Corps of Engineers, who will be overseeing the development and construction of the project. It is estimated that construction will begin in early 2020 and finish by 2024.

To blunt future storms and prevent flooding along the East Shore, the Army Corps of Engineers have put together various proposals to protect New York City and specifically Staten Island, which involves building a series of levees, barriers and gates around New York Bay to shield populated areas from storms coming off the Atlantic—including the East Shore Seawall as an integral part of the plan.

“Finally getting the seawall legislation signed into law was a longtime coming, but a huge step for so many families along the East Shore,” Rose said.

“Now the real work begins, and I’m going to be working hand-in-glove with the Army Corps and local community to ensure the seawall is built on time and with minimal disruption—because these families have been waiting for too long and we need to make sure this is done right,” added Rose.