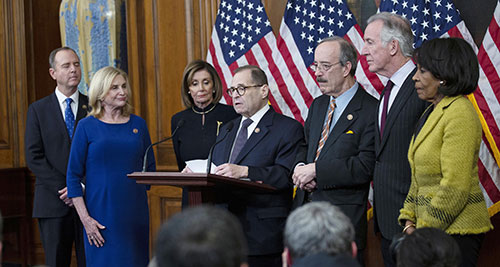 President Donald J. Trump will be impeached at last. He attempted to bribe a foreign power to have them interfere in the coming presidential election.  This is exactly the kind of “high crime” the Founding Fathers spoke about.  And we’ve seen President Trump obstruct Congress by refusing to answer subpoenas from the House of Representatives, compelling them to act. As House Speaker Nancy Pelosi said, “We have no choice.”

Now the action moves to the Senate where Republican senators, who will be sworn in as impartial jurors, have already said Trump is innocent.  The Senate Leader, Mitch McConnell, has said he is working closely with the defendant’s attorney on how the trial will best go to get their boy off with the least noise possible.

Unless four Republicans join the Democrats, forming a simple majority and forcing witnesses to be allowed so that Trump aides with direct knowledge are forced to testify under oath, then we’ll have the foregone conclusion come true: that Trump will remain in office until the election.

We are entering into what is possibly the most destabilizing time in the country since the Civil War.  The 2020 election is going to be pivotal in charting our course for the future.

The Republicans have already confirmed 150 young right-wing judges to lifetime appointments to federal courts and more are coming.  They will sit in court as a bulwark protecting white supremacy by fighting demographic and social change for another generation.

This makes controlling the legislative branch even more critical as laws will have to be written to control the blossoming conservative activism of the courts.

At this time, we are also facing off against thought manipulation through the sinister aspects of social media.  The election can be swayed with the ballot box hack being merely a distraction from the main event taking place on cell phones and computer screens.

The report by Special Prosecutor Robert Mueller detailed how the Russians created real-world demonstrations and protests with divisive media in the last election.  That was research for what they will be doing in the coming election.  Remain vigilant and listen to your gut. If you sense a negative emotional button being pushed about the election, take a pause and keep your eye on the prize:  Throwing Trump and his lot out of office.

Getting rid of Trump will need an avalanche of votes that will come from passion, not only with his good riddance in mind, but also passion for the nominee.

Although all of the Democratic candidates will bring out the passionate anti-Trump vote, the ticket will need something more.  For me, that is Georgia’s former candidate for governor, Stacey Abrams.  She has the attributes that any of the candidates will need on their ticket to win.

First, she brings with her the African-American woman’s vote and their “get out the vote” energy, 100%.   No other politician now in the race can do that.  She brings all the progressives and liberals, and she did not almost win the governorship on Black votes alone.

With Abrams, there will be a smart and forceful Black woman who will not only be sitting at the table, she will be speaking with the power of an unshakeable independent political base, and all eyes will be looking at 2024.