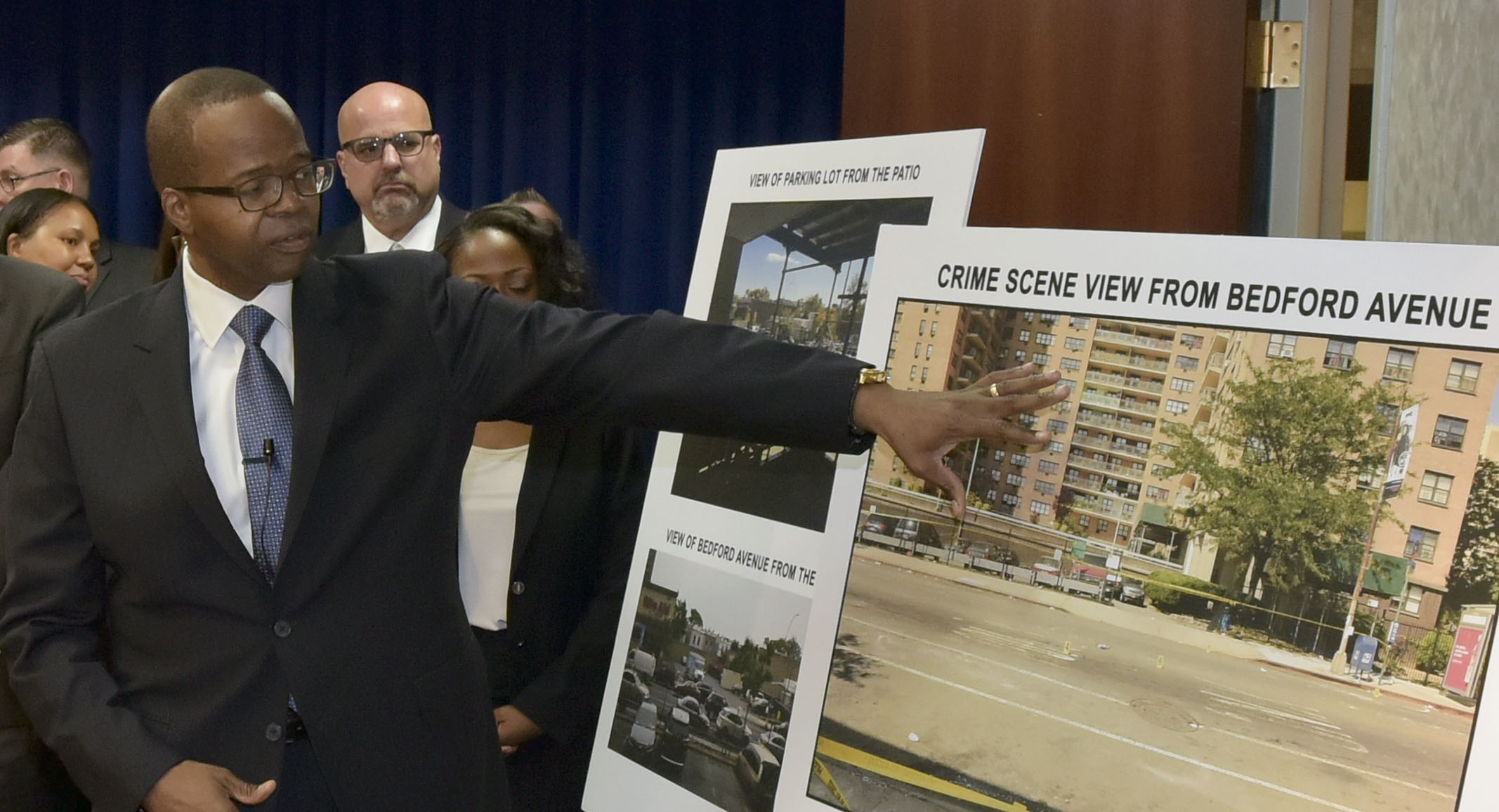 The murder took place outside the Ebbets Field Houses in Crown Heights, Brooklyn on Labor Day.  A fourth suspected gang member was previously indicted for possessing a machine gun at the scene.

Using photos, enlarged images and surveillance video, Thompson took the media through a step-by-step account of what evidence NYPD evidence reveals.  Gabay, was caught in a crossfire between warring rival gangs engaged in what is called “mutual combat.”  Thompson said that some 20 young men — members of different gang factions — turned the front of a Bedford Avenue building into a killing field; with one gang shooting from the street to the balcony and the other from the balcony to the street.  There were hundreds of people present. Gabay who had just happened upon the shootout had dropped for cover,  but a bullet struck him in the head.  He died nine days later.

The act of lawlessness and utter “depraved” disregard for life in this episode of local gang rivalry brought national attention. Several hundred people were in or near the scene – participating in the annual Pre-West Indian Day Parade J’ouvert festival.

DA Ken Thompson explains the scene of the crime to reporters.

Although a total of four men have been indicted, there are at least 16 more who may have been involved in the shootout that morning.  One bullet struck Gabay, but some 20 or so people using some 27 firearms, mostly 9 millimeters, acted with “depraved indifference” to shoot-to-kill.

District Attorney Thompson said, referring to the indicted, “These defendants are charged with creating a killing field in a crowd of innocent people.

“This indictment shows the importance of our efforts to put an end to gang-related gun violence that places innocent lives in the crossfire.  We are determined to get justice for Carey and his family and to hold accountable everyone who was involved in the shootout that took his life.”

Commissioner Bratton commended the work of the DA’s office and the Brooklyn Homicide squad, saying, “They began with nothing and built this case despite extraordinary obstacles, reconstructing a chaotic scene to determine – with amazing specificity – what happened that early September morning.  We will continue pursuing those who carried out this murder.”

Governor Andrew N. Cuomo, in a message to the media, said, “Carey Gabay was a dedicated public servant whose life was cut short due to reckless gun violence – tragedy that plagues too many of our communities.  With Carey’s help, New York passed the nation’s toughest gun safety law, but his murder underscores the fact that our federal gun laws are woefully inadequate.  While we took a great step forward with our historic legislation, without action from Congress known criminals will continue to buy guns in other states today and sell them in New York tomorrow.  I am grateful to the law enforcement officials for their relentless work investigating this case.  Today’s indictment is an important milestone in the quest for justice, and I hope that it brings solace to Carey’s family and loved ones.”

The suspects wee identified as Micah Alleyne, 24, of Jamaica, Queens; Tyshawn Crawford, 21 of East New York, Brooklyn and Keith Luncheon, 24, of Crown Heights, Brooklyn. They have been variously charged in a 16-count indictment with second degree murder, second degree criminal possession of a weapon and first-degree reckless endangerment.  Each faces a maximum sentence of 25 years to life in prison if convicted on the top count of which they are charged. Stanley Elianor, 25, of Brownsville, Brooklyn was arraigned in October 2015. A loaded Mac-10 machine gun that was recovered after the shooting from a metal grate in the patio matched Elianor’s DNA, according to the investigation.  He faces up to fifteen years in prison if convicted on the top count.

“We can’t tolerate (this gang activity), and we won’t,” he said.  “Carey Gabay’s death will bring about significant things” that will save lives.” This violence occurred, he noted, during an event dedicated to the celebration of life. “For the first time in history, the West Indian Day Parade (and other city parades) will be under permit.” There will be more scrutiny, lighting and other security measures for the public, he added.

DA Thompson, commenting on his concerns about the “new street culture” of gang violence — where weapons are hidden in different places in the neighborhood to be retrieved when a rival comes into view, also said: “Young men are getting guns too easy.  They’re coming up from The South. The problem is entrenched and it is national. It may take some time, but we will not give up in our quest (to stop it).”

Carey grew up in Bronx public housing and attended public school. After a successful high school career, he went on to graduate from Harvard University and Harvard Law School. While at Harvard University, he ran to become the president of his undergraduate student body. He was committed to public service and giving back.

In Pursuit of Elder Justice