In Pursuit of Elder Justice
Advertisement 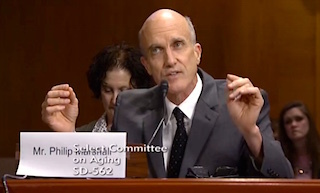 It is estimated that more than 5 million older Americans are victims of elder abuse, neglect, or exploitation. Experts believe that for every case of elder abuse or neglect reported, as many as 23 cases go unreported.

Through his “BeyondBrooke.org,” Philip Marshall has testified on elder abuse before the Senate Special Committee on Aging, and has lectured on the topic across the country for law enforcement, legal and civic organizations.  Our Time Press interviewed Mr. Marshall on a wide range of subjects as part of a recurring series on Elder issues, including elder abuse.  His comments will appear in several stories over time.

Below are excerpts from his address delivered at JASA’s 11th Annual New York City Elder Abuse Conference held on June 15, 2016 at The New School.

As my grandmother, Brooke Astor, now rests in peace, I could have resumed my life as before.

For years, my battle for my grandmother and my battle against my father consumed my life—and consumed our family.

In 2009, after a six-month criminal trial and conviction of my father a friend said, “You must be glad that’s all behind you”.

But I realize: When elder abuse hits home, it hurts.

I realize: While my grandmother was emotionally and financially abused…and isolated, her case is far from isolated; there are millions of victims today suffering similar injury.

I realize: If my grandmother, Brooke Astor, can be victimized by her own son, elder abuse does not discriminate; any elder is vulnerable.

I realize: The aftermath of elder abuse far exceeds any dollar amount. Most costs are irretrievable; some compounded.

And I realize: To be complacent about elder justice is to be complicit in elder abuse.

In fact, our national negligence is a proximate cause of elder abuse—and an injury to our mores and morality.

Our silence protects perpetrators, not their victims, our loved ones—or, on another day, ourselves.

When our elders lose their sight, it’s natural;

when we turn a blind eye to their plight, it’s negligent.

When our elders lose their hearing, it’s natural;

when we are deaf to their cries for help, it’s negligent.

When our elders lose their voice, it’s natural;

when we choose not to voice our concerns, it’s negligent.

And when our elders’ capacity is reduced, it’s natural;

when their assets are reduced, without consent, it’s criminal.

Over a decade ago, I was killed with angst, frustration and a sense of impotence as I watched my grandmother’s world, which had spanned the globe and a century, become so diminished and compromised by her son, my father.

I did not know what to do or who to turn to.

Yet, when bad things happen, good people get together.

In helping my fragile, abused grandmother I was not alone.

Her abuse galvanized a collective response by family, friends, staff and caregivers all united by compassion and a common cause with a great, mixed skill set. The strength of our diversity contributed much to our success.

I later learned we were an informal “multidisciplinary team”.  Yet, there was nothing “informal” about the stress we endured.

Staff and caregivers could have walked away any day, but with affirmation through action, they stood firm and protected my grandmother. Yet, some saviors endured secondary trauma or vicarious victimization.

I killed a guardianship petition to save my grandmother and to help those who were helping her.

Some of you are here today providing me an opportunity to thank you publically for the first time in New York. To you, I am forever grateful.  ≈

In killing my petition, I hoped that this matter would be quietly settled. Yet, this was not just a family affair, nor was it “civil”—it was criminal.

If I could do it over again, I would call the DA right away.

In her later years, my grandmother was increasingly isolated: close friends were denied visits; longtime, caring staff fired—fired because of their efforts to help and protect their boss, my grandmother. Eventually, she only went out to visit her doctor.

Isolated, too, were efforts to help my grandmother.

But out of shared concern, and facing incredible obstacles, we were able to unite. And act.

—and then who took the stand in criminal court for the greater cause of elder justice.

At the outset, all we dreamed and prayed for was to be able to respect my grandmother’s needs and wishes.

But once we took action, it was clear that we were addressing a much greater issue.

Once awarded guardianship, we had achieved our goal.

Now back in the country, my grandmother was no longer fearful. Caregivers were coupled with fully coordinated medical care. Friends visited. Her rector came for communion weekly. She went outside with her dogs.

Thanksgiving, which lived up to its name, provided a quiet time for my family to visit. Our children and my wife played guitar and sang harmonies.

Deep below her blanket of full dementia, we captured a twinkle in my grandmother’s eyes.

These fall months turned out to be halcyon days in the eye of the storm.

Back in October, only days after the guardianship was settled, a criminal investigation was launched by the Manhattan District Attorney.

With such great care on lawyer #3’s part to be at arm’s length from dealings, it is ironic to think that his final act, the execution of the third codicil, was the first matter that prompted the DA to take action.

In December 2006, just as my father declared that he had been vindicated, the DA’s Office expanded its work, impaneled a grand jury and issued subpoenas.

In November 2007, my father and the third lawyer were indicted. In April 2009, the criminal trial began and proceeded for months.

Today, you now know much more about the guardianship case than the jury did, even after six months.

That’s because all of the guardianship proceedings were barred from being introduced in criminal court.

For me, taking the stand was difficult. But not taking a stand, and not helping my grandmother, would have been more so.

Testifying against my father was very difficult.

But more difficult was having to recount the trauma imposed on my grandmother and those helping her—all the while not being able to tell my whole story to the jury.

The jury’s verdict: My father was found guilty on 14 of the 15 counts against him.

After a spring and long, long summer of my father’s trial and after heart-wrenching testimony, this was a very bittersweet harvest.

Yet, this harvest has so nourished the cause of elder justice.

We had advanced from tribulation to trial. From the tribulation of hearing the allegations in my petition for guardianship were “unsubstantiated” to a criminal trial that proved otherwise.

Even though much evidence was barred in the criminal court, the jury understood how elder abuse was used as a means to exploit and enrich my father’s scheme to defraud his mother.

Save one, all counts were upheld upon appeal.

And later in surrogates—whose proceedings had been put on hold through the efforts of the Attorney General—a settlement was reached that provided for charities (especially those with an emphasis on education) largely as my grandmother wished.

Here, if her wishes had not been met, New York teachers would have received nothing more than a lesson plan in how elder abuse can be used to exploit.

I could have disregarded heart‐wrenching accounts, and discounted calls for help from staff, caregivers and friends.

I could have found false consolation in thinking my grandmother had “had a good life” and, in the throes of dementia, wasn’t cognizant of her circumstances.

I could have maintained the fallacy that families should not air their dirty linen in public, even when financial assets are being “laundered” or stolen.

I could have been made complicit by the false prospect of “silence money” that would have increased my inheritance significantly.

I could have enabled my father by thinking “family first” and presume that my grandmother’s only child, only son—natural object of her affection—deserved all he sought.

But I could never, ever live with any of these choices. And I am so glad I chose to act.

Elder justice is in its infancy compared to other realms that define our social, legal and moral obligations.

Here, elder justice can help complete, not compete with, other causes.

Social justice is not about just one cause or just another. It’s inclusive and embracing, coming full circle to become whole, even holy for society, and here, for seniors.

We achieve “ageless equity” when the scales of justice balance the promise of our rising generations with our promise to those upon whose shoulders they stand.

Elder abuse is a pervasive, profound and systemic problem best addressed through systems-based solutions to understand better our universe of elder justice with its constellations, the alignment of its shining stars and the forces that keep them apart or draw them together by the gravity of elder abuse.

Our systems-based solutions are both bottom-up, starting with a person‐centered approach…and top down with leadership engaging all sectors in what Edwin Walker describes as a “comprehensive national framework”.

Within this framework, metrics matter more now to assess gaps, needs, opportunities and formative assessments along the way.

Just as elder justice is in infancy, so are big data analytics, with both seeking to explore and enhance relationships and their value in our complex life.

It’s all about relationships:  face‐to‐face and in our digital space. Analytics can strengthen our collective cognitive capacity to address elder abuse while helping all sectors in society steward our wealth, health and self.

With greater “cognitive capacity” and formative assessments made possible by analytics, we can better build upon existing public and philanthropic resources to include more private investment, which was never imaginable when my grandmother had the helm at the Vincent Astor Foundation.

Elizabeth Podnieks, founder of World Elder Abuse Awareness Day, or “World Day”, noted in a Webinar, “You can’t talk about networks without talking about social support”.

My grandmother would never want to be remembered only as one of America’s most famous cases of elder abuse.

For ,  in such a context, victimization “trims a life to fit the frame”. (James Hillman)

But here is my grandmother’s greatest legacy: that as an elder for over four decades, she practiced in New York City philanthropy whose priceless essence is the “love of humanity”.

It is through the lens of humanity that we see elders, otherwise made invisible by our ageist attitude.

For seniors are not the “problem”, they are part of our shared solution and resolution to address ageless issues and advance ageless equity.

With ageless equity, we work with elders who become indivisible, not rendered invisible.

By 2030 in the U.S., there will be over 70 million “shades of gray”; the world will have a billion, each one with its own hue, value and chroma to color our world far beyond that provided by the polarizing perception of a black‐and‐white approach to “graying”, to individuals and to age.

In recognition of World Elder Abuse Awareness Day, Assemblyman Cymbrowitz (Chairman, Aging Committee) emphasizes that, “Elder abuse is a problem that affects every community and cuts across all race, religion, culture and income lines”.

And so our “global” is our inclusive, perimeter protection and care of all elders year-round. Thank you for inviting me to share my story and dreams. Thank you more for all you do every day with elders.