The Sidewalks are Crowded — With Hazards on Wheels, Pedestrians Say
Advertisement 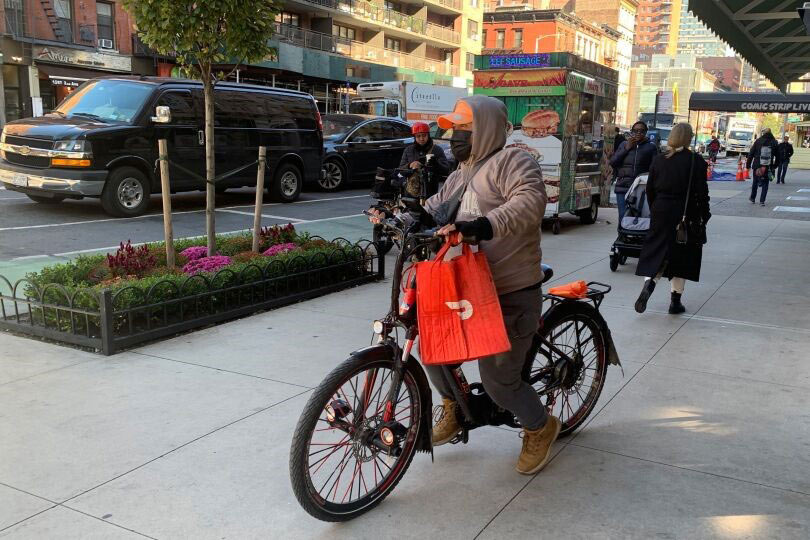 A cyclist rides on the sidewalk on Second Avenue at E. 81st St. in Manhattan last week. Jose Martinez/THE CITY

A ‘free-for-all’ of bikes, e-bikes, scooters and e-scooters on sidewalks
causes copious complaining to 311

“This story was originally published on October 25, 2022 by THE CITY. Sign up here to get the latest stories from THE CITY delivered to you each morning.”

When Manny Ramirez hops on his e-bike to deliver food between Northern Manhattan and the Upper West Side, he said he tries to stick to the rules of the road — and to the bike lanes where he is allowed to operate.

“I don’t go too fast and I feel safer in the bike lane,” said Ramirez, who has been delivering orders placed via mobile apps for several years. “But not everyone does the same.”
Of course, delivery workers aren’t the only riders making use of so-called micromobility vehicles. The citywide boom in the use of e-bikes and e-scooters has coincided — perhaps unsurprisingly — with a spike in reports about hazardous bicycles, scooters and other devices that aren’t cars.

An analysis by THE CITY of 311 data shows that complaints about cycling, scootering and even in-line skating occurring in unwanted locations have boomed from pre-pandemic levels — jumping from 484 in 2019 to 1,036 last year. In 2022, 1,082 complaints were made as of October 23, with about half coming from Manhattan. (The 311 data does not distinguish between complaints about various forms of transportation, such as bikes vs. e-bikes.)
“There’s bikes, e-bikes, scooters and mopeds — it’s insane,” said Rachel Benoff, 46, on Thursday after a delivery worker on an e-bike rode past her on an East 82nd Street sidewalk.“I feel like I am constantly having to dodge people.”
The surge has also been accompanied by a Citi Bike expansion and the shift of some New Yorkers away from mass transit to other forms of transportation.
At the same time, enforcement against bikes on sidewalks has decreased, NYPD statistics show — just as enforcement statistics in many categories has dropped when compared to pre-pandemic levels.

NYPD data shows that through the first six months of this year, the most current figures available, there have been 103 civil summonses and 97 criminal ones related to unlawful biking on the sidewalk. That’s down nearly 20% from the same time period in 2019 — and 52% fewer than in 2018, when police issued 346 civil summonses and 67 criminal summonses.
Compared to motor vehicles, bicycles, e-bikes and other motorized devices are involved in a very small fraction of all pedestrian injuries. According to DOT and NYPD statistics, there have been two deaths this year in which a pedestrian was struck by a bicycle — in contrast with the 76 instances through Sept. 30 in which someone was fatally struck by a motor vehicle.
“My New Yorker side comes out when I see someone biking on the sidewalk. It’s the only time I’m ever rude,” said Jameson Baughman, 31, who was walking two dogs on Beekman Street in Lower Manhattan Friday when a cyclist rode past him on the sidewalk. “As someone who also bikes, I think that’s what the [bike] lanes are for.”

A Study for Safety
The complaints come as the city’s Department of Consumer and Worker Protection nears completion of a study into delivery workers’ minimum pay and how to improve safety conditions for those toiling on the streets for tech companies.
The study, which agency spokesperson Michael Lanza said will be made public “in the coming weeks,” was mandated as part of a slate of City Council bills passed last year that aim to expand the rights and workplace protections of app-based delivery workers.
“We work with the Department of Transportation,” the agency’s commissioner, Vilda Vera Mayuga, told THE CITY in September. “We want to make sure that we’re doing the right feedback on all of our areas of expertise … We want to make sure that it’s really going to be the best way to serve New Yorkers.”

The city DOT is participating in the safety component of the study.
“DOT is addressing safe, lawful cycling from all angles: through new bike infrastructure, the education of delivery cyclists and support for policies that address working conditions influencing how and where these workers ride,” said Vin Barone, a DOT spokesperson. “Delivery cyclists were rightfully lauded as essential workers during the pandemic and we’re collaborating closely with sister agencies and labor groups to keep our streets safe for all road users.”

Street safety is a top concern for delivery workers and the labor group Los Deliveristas Unidos: Last year, 49% of workers surveyed by researchers at the Cornell University School of Industrial and Labor Relations and the Workers Justice Project reported being in a crash while making a delivery. Those who have survived say the app companies offer lopsided options for occupational and traffic injury relief.

The summer was marked by a series of deadly crashes including 21-year-old Christian Catalan, who was killed by a hit-and-run driver in The Bronx; Be Tran, 74, who was killed on the job in Queens by a hit-and-run driver; and Daniel Vidal, 30, who was run over by a truck in Brooklyn.
Queens State Senator Jessica Ramos said the companies that employ what City Hall estimates is 65,000 app-based food delivery workers across the five boroughs have to be accountable for the safety of workers scrambling to make deliveries.
“The apps themselves play a role here,” Ramos, who led the effort to have e-bikes and e-scooters legalized in 2020. “The workers feel a lot of pressure to work harder and that is not necessarily safe.”

Protect the Lanes
Robert Holden, a Queens City Council member, has proposed legislation that would require all powered vehicles with two or three wheels to be licensed and insured.
“It’s a free-for-all right now in New York City streets,” Holden (D-Queens) told THE CITY. “Everybody sees it — it’s mayhem.”
Transportation Alternatives, an advocacy group, noted that concerns over cycling safety on sidewalks and elsewhere in the streetscape highlight the city’s need to accelerate its legally required rollout of protected bike lanes.
The nonprofit organization’s Protected Bike Lane Tracker says not even one-third of the 30 miles of bike lanes that are mandated by city law to be in place by the end of this year have been installed. As part of the five-year NYC Streets Plan, 250 miles must be in place by the end of 2026.

“This is an infrastructure problem,” said Jacob deCastro, a spokesperson for the group. “Statistically, the best way to get bikes off the sidewalk is by giving bike riders safe, protected places to bike.”
The group cited a DOT report that showed how, after bike lanes were installed in 2012 along Prospect Park West in Brooklyn, the percentage of cyclists riding on the sidewalk plummeted to 3% from 46%.
While the number of crashes involving bicycles pales in comparison to those involving motor vehicles, the EMS medical director at NYU Langone Health said crashes involving cyclists are a daily concern for medical staff at the hospital.
“At least once per day, sometimes more,” Dr. Reed Caldwell told THE CITY. “Fortunately, many people have minor injuries like scrapes and contusions, but people also get critically injured when it happens.”

Elena Solitario, 80, said she’s become hyper-aware of bicycles on sidewalks and in the streets while walking on the Upper East Side, which has the highest number of 311 complaints about bikes and scooters in unwanted locations.
“I’m always saying, ‘What are you doing?’” Solitario said. “I’ll be on the sidewalk, walking or talking on the phone, and they’re just going.”
“THE CITY is an independent, nonprofit news organization dedicated to hard-hitting reporting that serves the people of New York.”

He Raised the Bar, Set the Standard, Lit the Way