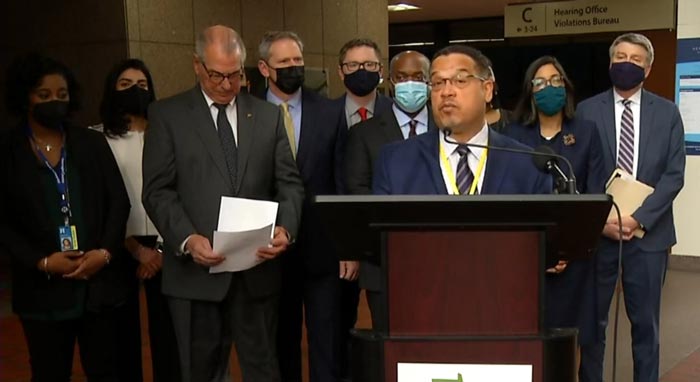 After his office led the prosecution of Derek Chauvin, culminating in a guilty verdict on all three counts in the death of George Floyd, Attorney General Keith Ellison called for a “transformation” of the relationship between police and civilians.

He referred to Tuesday’s verdict as the result of “long, hard, painstaking work,” but said: “I would not call today’s verdict justice however, because justice provides true restoration.

“But it is accountability, which is the first step towards justice.”

He paid tribute to those who watched Floyd’s death under the weight of four police officers, including Chauvin on his neck.

“George Floyd mattered, he was loved by his family and his friends, but that isn’t why he mattered, he mattered because he was a human being, and there’s no way we can turn away from that reality.

“The people who stopped and raised their voices on May 25, 2020, were a bouquet of humanity. Old, young, men and women, black, white, a man from the neighborhood just going to get a drink, a child getting a snack with her cousin … brave young teenagers who pressed record on their cellphones.

“They stopped and raised their voices, and even challenged authority because they saw his humanity … because they knew what they were seeing was wrong … and they were right.”

More than anything, Ellison says Chauvin’s conviction needs to become a springboard towards change, echoing ongoing calls for major structural change in law enforcement across the nation.

“Today we have to end this travesty of recurring enduring deaths at the hands of law enforcement Those beliefs are things we have to focus our attention on.

“The work of our generation is to put unaccountable law enforcement behind us. It’s time to transform the relationship between community and the people who are sworn to protect them from one that is mistrustful, suspicious and in some case terrifying, to one that is empathetic, compassionate and affirming.

“That will benefit from everyone including police officers who deserve to serve in a profession that is honored.”

Lola Velázquez-Aguilu, litigation and investigation counsel for Medtronic, and former prosecutor with the U.S. Attorney’s Office for the District of Minnesota. During her tenure at the U.S. Attorney’s Office, she prosecuted complex multi-defendant, white-collar crimes. She formerly served as Chairwoman of the Commission on Judicial Selection, to which position she was appointed by Michigan Governor Tim Walz.

Jerry W.  Blackwell, trial lawyer and founding partner, CEO, and chair of the Minneapolis law firm Blackwell Burke, P.A. In June 2020, he won a full, first-ever posthumous pardon for Max Mason, who was wrongly convicted of rape in connection with the infamous Duluth lynchings of June 1920. Three men arrested with Mason were beaten and lynched the night of their arrests on June 15, 1920.  Blackwell founded the Minnesota Association of Black Lawyers. Attorney  Blackwell thanked “all the selfless servants [who have] the passion to get into good trouble. They step into the light and they shine.”

“No verdict can bring George Floyd back, but it does give a message to his family that he was somebody, that his life mattered and that all of our lives matters,” Blackwell said. “Also, I hope this verdict will help us all along the road to a better humanity.

Minnesota Assistant Attorney General Erin Eldridge joined the attorney general’s office in 2018, where she works in the criminal division. She previously worked as a special assistant U.S. attorney in Nebraska and Iowa.

Minnesota Assistant Attorney General Matthew Frank is the lead prosecutor of Chauvin’s case. Frank has been the manager of the criminal division of the Minnesota attorney general’s office for the past 14 years and has worked in the attorney general’s office for a total of 21 years. Before he joined the office, he worked as a public defender in Anoka and Sherburne counties, and as an assistant Wright County attorney.Most court documents filed by prosecutors for this case are signed by Frank.

Sundeep Iyer, also a special attorney for the state, is a senior associate at Hogan Lovells in New York and Washington, D.C. Iyer specializes in appellate litigation and motions in federal and state court.He has briefed cases before the U.S. Supreme Court and was part of the team that got an injunction against former President Donald Trump’s travel ban.

Steven L. Schleicher, partner at the Minneapolis law firm Maslon LLP; former prosecutor with the U.S. Attorney’s Office for the District of Minnesota, the Minnesota Attorney General’s Office, the Winona County Attorney’s Office, and U.S. Army Reserve JAG Corps. In 2016, he led the successful prosecution of the person responsible for the kidnapping and murder of Jacob Wetterling.  Schleicher specializes in criminal defense as well as government and internal investigations. He’s worked on cases involving homicide, criminal sexual conduct, armed robbery, assault and other violent crimes.

Attorney  Schleicher presented the closing remarks.  He thanked Attorney General Ellison for calling him back to into public service to represent the state in the case against Chauvin. “I’m honored to have stood with the Floyd family, with the state of Minnesota. It’s a been a privilege. I stand here in gratitude, thankful. I thank the jury for their service in doing what’s right, decent and correct and speaking the truth and finding the right verdict in this case.”

Prosecutors in the trial of Derek Chauvin charged with killing George Floyd had a winning strategy, according to Erik Ortiz, NBC News, Tuesday. Here’s what they did right.

They made a straightforward appeal to the jury during closing arguments: “Use your common sense. Believe your eyes. What you saw, you saw.”

Prosecutors sought to prove to the jury that Floyd died from asphyxia, or insufficient oxygen, from Chauvin kneeling on his neck.

Driving home that message — in essence, to trust in the video evidence that was the linchpin of the state’s case — was a winning strategy for prosecutors, who shut down the defense in the highly anticipated trial, legal analysts and policing experts said.

Chauvin, 45, was found guilty Tuesday of all the charges against him — second-degree unintentional murder, third-degree murder and second-degree manslaughter — which required the jury to unanimously agree that the force he used on Floyd, 46, while he was detained by police in May was unreasonable and reckless and that it caused his death. Video taken by bystanders showed Chauvin kneeling on Floyd’s neck for more than nine minutes as Floyd repeatedly said, “I can’t breathe.”

“That video and the instruction to the jury to ‘believe your eyes’ was powerful and made up an overwhelming amount of evidence,” said Kalfani Ture, a former police officer who is an assistant professor of criminal justice at Quinnipiac University in Connecticut.

“The defense were lacking, and they were shredded by the prosecution,” he said.

At a news conference after the verdict was read, Minnesota Attorney General Keith Ellison celebrated the outcome, saying the prosecution was “a team of all Michael Jordans.”

Let This Be The Precedent

‘We are Able to Breathe Again’