The Meaning of Wild Famous
Advertisement 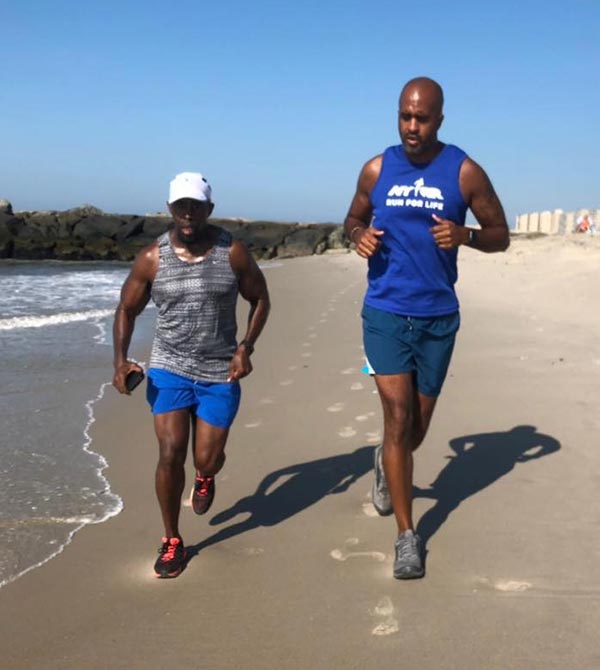 The last days of October are a special time in New York City. Brownstone stoops are decorated with pumpkins and skeletons, and the young children in the neighborhood are ready to trade in their fright for candy. Politicians are making their last rounds, appearing at every church and fall festival hoping to trade in their handshakes for votes. And 50,000 runners (myself included) are ready to trade in an entire summer of training to grab a medal in Central Park on the first Sunday of November.

I met Patrick Burnett in 2010 at Rustik Tavern. We have dozens of friends in common, it was just a matter of time before being in proximity of one another forced us to meet. Pat is calm, measured, he is someone who is friendly but quiet, warm but stoic. I’ve always known Pat as a runner. He has run over 40 marathons, and he was someone that I looked up to as a runner before we even became close. One time we happened to be in New Orleans at the same time for Essence Fest. I saw him at a party, and with a smile of accomplishment I told him that earlier that morning I had run 4 miles. He smiled, and then replied that earlier that morning he had run 17 miles.

That’s Pat. He is a private overachiever, a guy who isn’t afraid of the work. It wasn’t uncommon at all for me to see Pat running down Bedford Avenue heading to parts unknown to log miles. Early one morning in May 2016, that’s exactly where I spotted Pat, on Bedford Avenue headed north while I was heading to the gym. A couple days later, my friend Rudy called me. He asked, did I hear? Hear what? About Pat. What about Pat? Pat was in the hospital. He was diagnosed with meningitis.

Meningitis is an inflammation of the protective membranes covering the brain and spinal cord. Pat doesn’t know how he contracted the illness, but in hindsight, one of the red flags he experienced was severe back pain. After the back pain forced him to spend an entire day in bed, and after a bout of extreme sweating unlike anything he had ever experienced, he went to the hospital. He went at the right time. Had he waited just one more day, Pat may not be here.

Pat spent 47 days in the hospital. He was unable to walk. The private overachiever was reduced to having nurses help him from the floor after falling on his face while trying to walk to the bathroom. At one point, the doctors told him that because of the lack of progress he might have to live in a nursing home. After proving that he could make it up four steps, the hospital finally sent him home with a wheelchair and a walker. He never removed either from the boxes that they came in. He worked every day to walk again. He used the walls of his apartment as his crutches to get to the bathroom. His girlfriend, Lydia, would come home from work and walk him up and down the stairs in their home. Every day, Pat did a little bit more than the day before. Every day, Pat kept to the challenge, though it seemed at times unfathomable. And finally, in August 2016, three months after contracting meningitis, two months after being unable to walk under his own power, Pat ran a mile. Actually, he ran three. He was going to stop at one, but he got into a rhythm and kept going.

It was at a brunch in Brooklyn, a week or so after Pat ran the Miami Marathon in February of 2017 – his first marathon just 9 months after being struck with meningitis – that he convinced me to run my first marathon. We ran the NYC Marathon together in 2017. We ran it together last year. And we will be running it together this year.

In 2017, I created a running group called Wild Famous. The idea for the phrase Wild Famous comes from a quote that I read years ago from the Indian Philosopher Jiddu Krishnamurti. He said, “We all want to be famous, and the moment we want to be something we are no longer free.” His point was that fame, and the desire for fame conforms and subdues the human spirit. Fame isn’t free. It’s domesticated like a neutered, declawed pet. Wild Famous is the ideal that being your best self is enough, it says that the greatest freedoms lie in you wanting to be you, not in wanting to be like others. Our individual journeys define us, not the shows we like to watch or who our favorite basketball player is. This marathon is a reminder of that. 50,000 runners, each on their own individual journey to become better; as a person, as an athlete, as a parent, as a spouse.

This is why we run.

Advertisement
Related Topics:marathonNYC Marathon
Up Next

Memorial and funeral services were held for Congressman Elijah Cummings