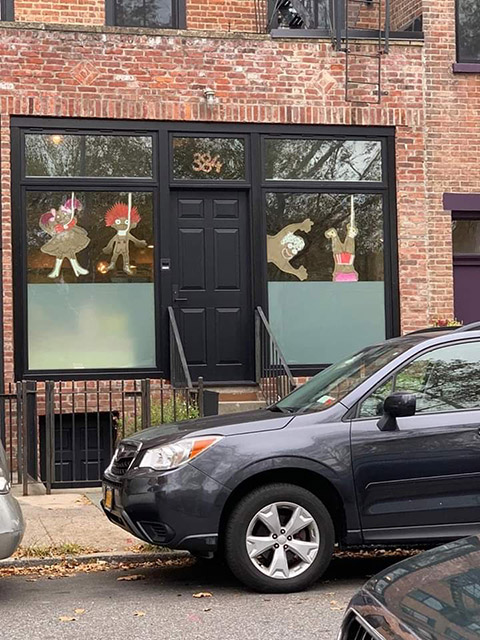 Clinton Hill residents were shocked Tuesday as pictures were posted throughout social media showing the front windows of Artshack Brooklyn, located at 384 Waverly Place. The windows were decorated with caricatures that appeared to be in Blackface, with what looked like ropes around their necks. One caricature was depicted being hung with a rope by his feet. Those who saw the windows were immediately outraged. Residents on scene took to social media to post and comment on the pictures.

384 Waverly Place sits right across the street from PS 11, an elementary school. Children leaving school on Tuesday, as well as the parents picking their children up, were made to see those racially insensitive images. In today’s racial climate, to have a business in such a diverse community as Clinton Hill exhibit such racially insensitive views speaks to a bigger problem than Dany Rose’s tepid apology could ever address. No one who has resided in this community since 1999, such as Dany Rose, should have to be educated on the issue of racial insensitivity. How do you not know that Black characters with ropes around their necks is wrong to promote on the windows of your business? Her statement of this being a tremendous mistake only speaks to the feedback the act received and not the idea that it was okay to put up in the first place. Because that is the truth. Before she realized it was a mistake, she thought it was a good idea to post those pictures on her window. It’s only viewed a mistake now because we the community say it’s a mistake, not because Dany Rose thought it was a mistake.

Clinton Hill was a tight-knit community for decades before newcomers came with the idea of colonization. We were always diverse. And we were always a community. As gentrification has created a new resident base, it is important for everyone to understand that this community works because of mutual respect and consideration. The act of Dany Rose and Artshack Brooklyn smacks in the face the idea of community that has existed in Clinton Hill since before Dany Rose ever set foot in New York City. With all due respect, 20 years living here obviously doesn’t mean you are part of the community. And actions such as the portrayal of what amounts to Black children being lynched on your windows prove that you aren’t part of this community, nor should you be. And neither should Artshack.

Editors Note: (Rose claims her Halloween store window was a tribute to the 2014 horror movie, “Annabelle.”)

The Meaning of Wild Famous