The Lessons of the Jacob Dangler House, 441 Willoughby Avenue
Advertisement 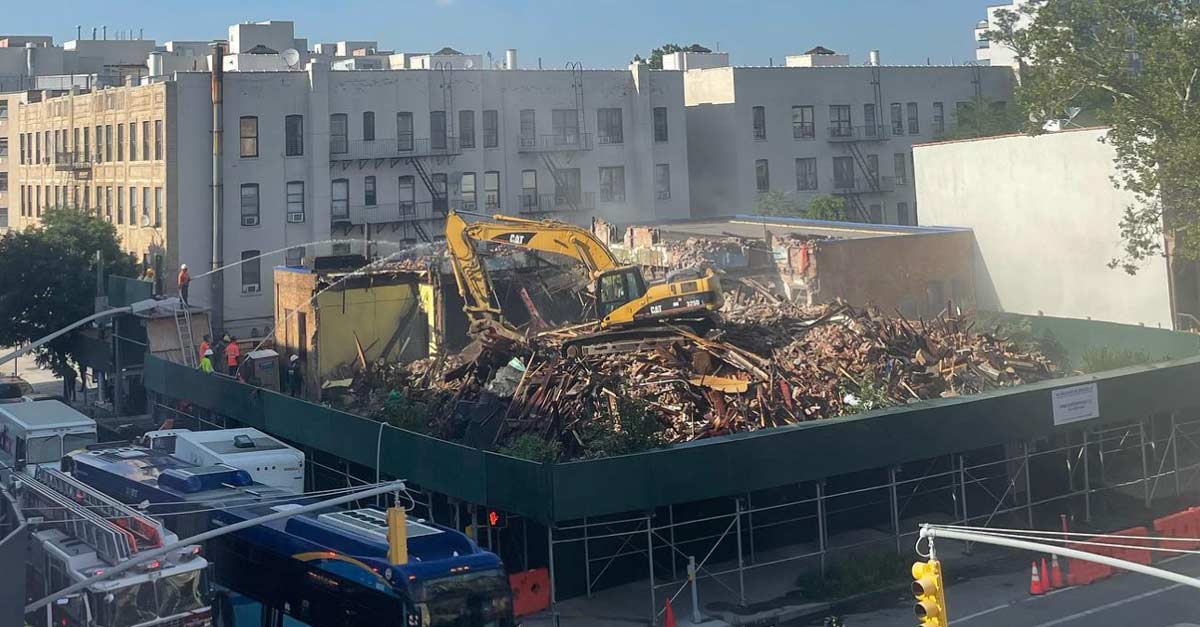 Hole in the Soul of Bed-Stuy - A 19th century Brooklyn newspaper called the Dangler building an “Ornament to the City” for its French Gothic architectural style and interior details. Neighbors reportedly have said, a jewel was “stolen” by the developer, the Department of Buildings and Landmarks. Other voices from the ground cite reticence of pols and lack of fierce community pressure as causes of the demise of 441.

By Suzanne Spellen
The mansion on the corner of Nostrand and Willoughby avenues is gone. Built in 1902 for merchant Jacob Dangler, it stood for 120 years. For the last 55 years it’s been the property of the Oriental Grand Chapter of the Eastern Star. It was “the Castle,” to the residents of this predominantly African American block, where birthday parties, showers, block association meetings and Boy Scout gatherings took place along with the activities of several Masonic lodges.

With years of rising costs, COVID, and little income, the Eastern Stars decided to sell. After decades of redlining and negative press, Central Brooklyn is now hot property. This part of Bedford Stuyvesant is a magnet for developers, adjacent to gentrifying Bushwick and Williamsburg. No longer “do or die,” it’s “buy and buy.”

Neighbors rallied. Protecting the building through landmarking looked promising. After a positive hearing, the Landmarks Preservation Commission (LPC) had 40 days to rule. They failed to do so and on day 41, the backhoe demolished the building in record time, while neighbors and advocates looked on in horror and tears. Instead of rehab, the developer declared that “no one wants an old building.”

Developers don’t care about architecture, or history or community and cultural significance. They only care about profit. Landmarking remains the best way to protect our communities from aggressive development. But we must be pro-active, we must identify and work to landmark long before a sale. This time we lost the fight, we can’t afford to lose the war.
Suzanne Spellen, a 30-year resident of both Bedford Stuyvesant and Crown Heights North writes about architecture and history for Brownstoner.com and other publications. Her expertise in Central Brooklyn’s buildings and history has led to work with the historic preservation departments at Columbia University and Pratt Institute. She lectures and leads walking tours for the Municipal Art Society, the Brooklyn AIA and other organizations. Suzanne is a board member of the Crown Heights North Association and is a resident of Troy, NY. She is active in historic preservation in that city, as well.

A Building is Down, Bed-Stuy is Not Out

New York City and Beyond Mourn
the Passing of Dr. Albert Vann, “A Mighty Tree”