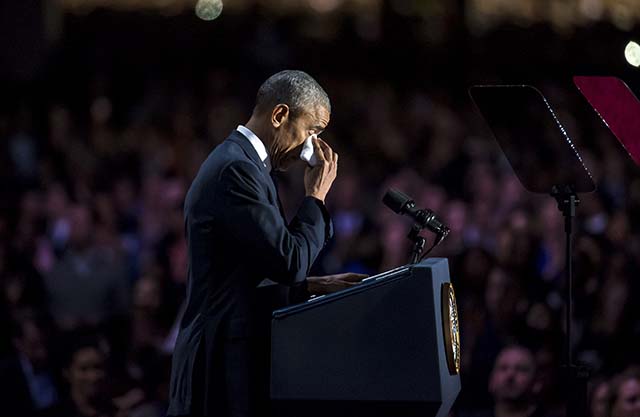 The country’s first black president had one last act: reminding Americans to still believe in change and remain hopeful.

At the close of a historic two-term presidency, as the nation’s first African-American president of the United States, Barack Obama had one last benevolent act: to remind the country not to give up on hope or the belief that it could create change.

Despite the enthusiastic cheering from the audience at Chicago’s McCormick Place convention center Tuesday evening, many attendees couldn’t hold back their tears as President Obama reminded them of what’s happened during his tenure, and just how far we’ve all come—together.

“If I had told you eight years ago that America would reverse a great recession, reboot our auto industry and unleash the longest stretch of job creation in our history … if I had told you that we would open up a new chapter with the Cuban people, shut down Iran’s nuclear weapons program without firing a shot and take out the mastermind of 9/11 … if I had told you that we would win marriage equality and secure the right to health insurance for another 20 million of our fellow citizens—you might have said our sights were set a little too high,” Obama said.

“But that’s what we did. That’s what you did. You were the change,” he continued. “You answered people’s hopes, and because of you, by almost every measure, America is a better, stronger place than it was when we started.”

His farewell speech went far beyond a full accounting of what he’s accomplished in office. Being true to his roots as both a lawyer and law professor, and as a community organizer, President Obama reminded Americans of the power and potential of a democracy where people choose to participate, as well as a commentary on how history has led to the current state of our politics.

Michelle Obama in Final Speech: ‘I Hope I’ve Made You Proud’