Michelle Obama in Final Speech: ‘I Hope I’ve Made You Proud’
Advertisement 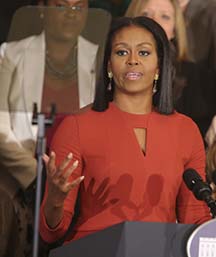 “You see, our glorious diversity — our diversities of faiths and colors and creeds — that is not a threat to who we are, it makes us who we are.”

January 6, 2017 – Washington, D.C, U.S – First Lady Michelle Obama delivers her final remarks as First Lady at the 2017 School Counselor of the Year event in the East Room of the White House in Washington, D.C., on January 6, 2017…School Counselor of the Year is an annual White House tradition started in 2015 by Mrs. Obama. (Credit Image: © Oliver Contreras via ZUMA Wire)

In her final speech as the first lady, Michelle Obama spoke of the great value of diversity, American tradition, the country’s future and how grateful she was to have served as first lady.

“Being your First Lady has been the greatest honor of my life, and I hope I’ve made you proud,” Obama said while speaking at an event to honor the 2017 School Counselor of the Year.

Addressing America’s young people, Obama said, “this country belongs to you — to all of you, from every background and walk of life.”

She recalled how she and her husband, President Barack Obama, started their lives without a lot of money. “But with a lot of hard work and a good education, anything is possible — even becoming President,” Obama said. “That’s what the American Dream is all about.”