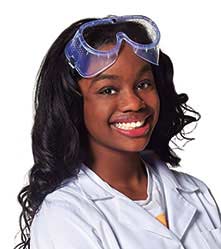 Jacqueline Means, aka “The STEM Queen”, founded the Wilmington Urban STEM Initiative at age 16 .
The purpose was to to empower girls in her community and increase their interest in STEM (Science, Technology, Engineering, and Math) through her innovative STEM education program and her Girls Empowerment STEM Events , according to her website.
Two years later she is empowering a nation of young people, and their guardians. And there’s no stemming her success. She currently is a freshman at the University of Delaware where she is studying neuroscience. She loves Anime (Japanese animations) and Manga (Japanese comics)! She is teaching herself Japanese. She is an avid video gamer.
​Jacqueline Means , in her own words:
Having STEM skills is necessary to thrive in the 21st century, making it imperative that today’s youth is capable and prepared to live in the inevitable STEM-forward future.
However, studies show that girls are less likely to participate in activities involving STEM and computational thinking. To encourage girls to get involved with STEM and not be intimidated by it, I started hosting my Girls Empowerment STEM events two years ago.
At my events, I introduce the girls to a variety of STEM activities, including hands-on science experiments, like making slime and elephant toothpaste! The girls also get inspiring talks from prominent women, such as Congresswoman Lisa Blunt Rochester, in hopes to excite and inspire them about science and engineering. I want to equip them with the knowledge and confidence that they, as females, can succeed in the STEM field.
I have positively impacted over 2,000 young girls and encourage them to challenge the stereotypes they may face as females in these professions. With only 29% of the STEM workforce being female, it is my mission to motivate the girls to believe that they CAN one day be a successful scientist, tech specialist, engineer, or mathematician and let them know that there are no boundaries to their success.
I believe that each girl is valuable and capable of achieving goals that seem unattainable, they just need to be shown that. I offer them living proof by holding steadfast to my own standards of excellence and achievement, in other words — I walk the walk and don’t just talk the talk. By letting them know I live right here in the same community as they do and that they don’t have to fall into the negative stereotypes surrounding them, I can raise their belief in themselves and, by doing so, can help them by encouraging them to increase their grades and reduce the chances that they will turn to negative distractions. I strive to offer them hope as a role model, teacher, and friend.

So Whatever Happened to Our Dr. Christopher Boxe? He Never Left …

History-Maker
For thousands of children — now aging baby boomers, millennials and post-millennials growing up during from the the 1950’s to the 1990’s, first up-close look at real scientists came through the world television. They knew the tube’s Bob Herbert, The Wizard; “that science guy” Bill Nye and of course, in more recent years, Carl Sagan and Neil Tyson DeGrasse. And those distant stars did make a difference in many children’s lives. impacting science knowledge way
before STEM got its named, and influencing the “actors” who would give STEM its name.
But for hundreds of Central Brooklyn students, history was made when the OTP editor and publisher invited Dr. Christopher Blaszczak-Boxe to the neighborhood to visit the schools and talk to the students on careers and science, during 2018-2019,
Dr. Boxe did that and much more, including giving out personal scholarships to deserving science students, and developing courses and workshops for them, as well as curricula recommendations for their teachers and parents. He enjoyed a huge following, and influenced many career choices in the STEM field. And that work is ongoing.
So, whatever happened to Dr. Boxe? The answer is simple: he never left.
After serving as faculty at the City University of New York and teaching in the K-12 system in Brooklyn, -NY, Dr. Christopher Blaszczak-Boxe continued his life-long commitment to Diversity, Equity, and Inclusion (DEI) at Penn State University @ University Park/State College.
He also is the 1st Black faculty at PSU’s Department of Geosciences, where he is an Associate Research Professor. He is also working there is Computational & Data Sciences (ICDS). Through these appointments, Dr. Boxe is tasked with teaching earth and planetary science courses at the graduate and undergraduate level and continuing his research in planetary atmospheric modeling and environmental assessment and monitoring of soil, water, and air contaminants. Dr. Blaszczak-Boxe is also Co-Director of the National Council for Science & the Environment (NCSE) PSU EnvironMentors Chapter.
In the short time frame of being at PSU, he has : 1) helped create the Dept of Geosciences’ 1st DEI Committee; 2) helped create the 1st Unlearning Racism in the Geosciences (URGE) podcast in the Dept of Geosciences; 3) worked with faculty and administrators to provide a streamlined and holistic platform to recruit and retain more diverse undergraduate, college, and faculty constituents to PSU; and 4) implemented virtual/F2F synergistic DEI-platforms of conversation across campus.
Dr. Boxe continues to rock the world of science with his accomplishments, but the achievement he holds most dear is being known to thousands of Central Brooklyn youngsters as the first scientist they ever met. In addition to planting trees during arbor day ceremonies at public schools and judging eco-arts competitions, Dr. Boxe, working with school principals and teachers, also offered his own private scholarships to deserving students.
As a community advocate, Dr. Boxe will continue to work with Our Time Press as one of our editorial advisors when STEM NEWS officially returns on March 18, 2021.

Why a Rocket Scientist Quit NASA to Help Young Coders

by Jordan Keller,
Groupon
“In high school, my friends thought I was going to be a dropout,” Aisha says. “For a long time, I did too.” She’d drifted through a couple rudderless years at Washtenaw Community College in southeastern Michigan. But after acing her Calc-II exam—a test she confesses she took while recovering from a trip to New Orleans for Mardi Gras—Aisha was held after her test by the professor. He told her he’d swapped in some more advanced questions on her exam, that she’d scored 100 percent, and that this result was exceptional. He implored her to take the test home and start thinking differently about herself.
Aisha had lived her whole life believing the opposite. “I spent middle school and high school thinking I was bad,” she says. “It was the story I told myself. ‘My parents got a divorce. I don’t come from money. I don’t get good grades. I’m not focused. I’m not driven.’ Someone like that doesn’t grow up to be special.”
Still, what her professor said resonated. “There comes a time in your life where you have to think critically about yourself. I realized, OK, I have low self-esteem. I don’t feel like I can be anything. Maybe that’s the problem?” Aisha read about the concept of manifestation, of bringing something into your life by focusing on it and believing it. She wrote out a list of what she wanted, taped it on her door, and looked at it every day. Every step built towards three words at the bottom:
Work for NASA.
What she didn’t realize at the time was that NASA wouldn’t be her final step. It was just another on the path to founding her own company, and creating something that could teach and inspire kids who, like her, didn’t believe they could be extraordinary.
Note to readers: Aisha Bowe is Founder and CEO of STEMBoard, a technology solutions company that specializes in using big data to create smart systems & software solutions for clients in the public and private sectors.
(Next month, OTP features Aisha Bowe in a salute to the Phenomenal Women series inspired by urban ecologist Hattie Carthan and curated by Charlotte Mial for four years, 2013 – 2015 at Herbert Von King Park in Brooklyn, New York.)