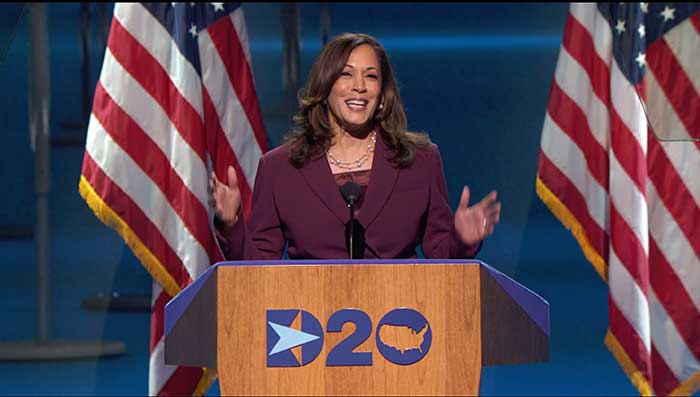 “…We Have a Chance to Change the Course of History.”

Senator Kamala Harris accepted the nomination for Vice President of the United States and invoked the names of “Women like Mary Church Terrell and Mary McCleod Bethune. Fannie Lou Hamer and Diane Nash. Constance Baker Motley and Shirley Chisholm,” saying, “We’re not often taught their stories. But as Americans, we all stand on their shoulders.”
She spoke also of her mother Shyamala Gopalan Harris. “She came here from India at age 19 to pursue her dream of curing cancer. At the University of California Berkeley, she met my father, Donald Harris—who had come from Jamaica to study economics.
“They fell in love in that most American way—while marching together for justice in the civil rights movement of the 1960s.

“In the streets of Oakland and Berkeley, I got a stroller’s-eye view of people getting into what the great John Lewis called ‘good trouble.’”
She spoke of being raised by a single mother after her parents “split,” and of the values her mother instilled in her and her younger sister. “She raised us to be proud, strong Black women. And she raised us to know and be proud of our Indian heritage.”
She said, “I’ve fought for children, and survivors of sexual assault. I’ve fought against transnational gangs. I took on the biggest banks, and helped take down one of the biggest for-profit colleges,” and in an allusion to Donald Trump, “I know a predator when I see one.”
She accepted the nomination with a message of inclusion taught by her mother who, when at her birth in Oakland, California, “…could have never imagined that I would be standing before you now speaking these words: I accept your nomination for Vice President of the United States of America.

“I do so, committed to the values she taught me. To the Word that teaches me to walk by faith, and not by sight. And to a vision passed on through generations of Americans—one that Joe Biden shares. A vision of our nation as a Beloved Community—where all are welcome, no matter what we look like, where we come from, or who we love.
“A country where we may not agree on every detail, but we are united by the fundamental belief that every human being is of infinite worth, deserving of compassion, dignity and respect.

A country where we look out for one another, where we rise and fall as one, where we face our challenges, and celebrate our triumphs—together.”
And of the current president she said, ”Donald Trump’s failure of leadership has cost lives and livelihoods,” leaving parents struggling with remote learning, and “a nation that’s grieving. Grieving the loss of life, the loss of jobs, the loss of opportunities, the loss of normalcy. And yes, the loss of certainty.”
Looking forward to a Biden/Harris administration she said, “Right now, we have a president who turns our tragedies into political weapons.
“Joe will be a president who turns our challenges into purpose.
“Joe will bring us together to build an economy that doesn’t leave anyone behind. Where a good-paying job is the floor, not the ceiling.
“Joe will bring us together to end this pandemic and make sure that we are prepared for the next one.
“Joe will bring us together to squarely face and dismantle racial injustice, furthering the work of generations.
“Joe and I believe that we can build that Beloved Community, one that is strong and decent, just and kind. One in which we all can see ourselves.”
And of the pandemic that has struck the nation so hard, Senator Harris said, “…let’s be honest, it is not an equal opportunity offender. Black, Latino and Indigenous people are suffering and dying disproportionately.
“This is not a coincidence. It is the effect of structural racism.
“Of inequities in education and technology, health care and housing, job security and transportation.
“The injustice in reproductive and maternal health care. In the excessive use of force by police. And in our broader criminal justice system.
“This virus has no eyes, and yet it knows exactly how we see each other—and how we treat each other.
”And let’s be clear—there is no vaccine for racism. We’ve gotta do the work.”
Looking at the current state of the nation under Trump’s leadership Senator Harris he has brought us to the point where “The constant chaos leaves us adrift. The incompetence makes us feel afraid. The callousness makes us feel alone.”
To make the changes that are needed is a communal responsibility and a new administration cannot do it alone and that this is a fight that must be won. “Years from now, this moment will have passed. And our children and our grandchildren will look in our eyes and ask us: Where were you when the stakes were so high?
“They will ask us, what was it like?
“And we will tell them. We will tell them, not just how we felt.
“We will tell them what we did.”

It was an historic address at a time like no other in the nation’s history. A time when the foundations of the nation are being rattled and challenged and her remarks reinforced the theme running through all of the speeches, that this is a time when democracy itself is at stake.

That was the message of former President Barack Obama speaking of the failure of Trump’s leadership. “170,000 Americans dead, millions of jobs gone, our worst impulses unleashed, our proud reputation around the world badly diminished and our democratic institutions threatened like never before.”


Speaking of his successor, Mr. Obama said “Donald Trump hasn’t grown into the job because he can’t,”  and that, “I did hope, for the sake of our country, that Donald Trump might show some interest in taking the job seriously that he might come to feel the weight of the office. And discover some reverence for the democracy that had been placed in his care. But he never did.”

Mr. Obama insisted that this is a time for everyone to get behind the Biden/Harris ticket, because “What we do these next 76 days will echo through generations to come.”

Kamala Harris is the Most Disrespected Woman in America