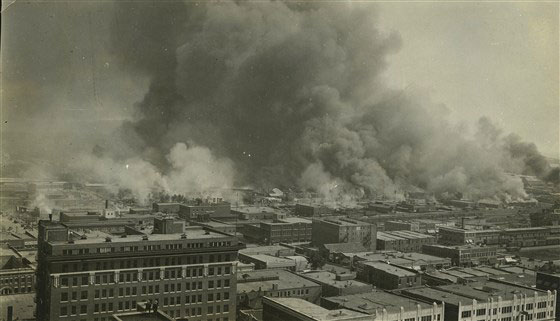 Experts at the University of Oklahoma believe they have found a possible mass grave site from the 1921 Tulsa Race Massacre at a city cemetery, although they are unsure how many bodies are underneath.

Geophysical scanning identified two spots at the Oaklawn Cemetery that might bear bodies of those killed in the city’s race riots almost 100 years ago, Scott Hammerstedt, a senior researcher for the Oklahoma Archeological Survey, said Monday at a public hearing in Tulsa.

Surveys confirmed suspicions that one area might be a grave, in addition to a newly discovered trench under the soil of about 30 by 25 feet.

“I’m as confident as I can be in the results that this is a very big candidate with something associated with the massacre,” Hammerstedt said.

Phoebe Stubblefield, a forensic anthropologist at the University of Florida, cautioned at the hearing that the number of bodies inside the trench could be anywhere from 10 to 100. She also said it’s unlikely that researchers will be able to identify any remains.

“We just don’t know what level of preservation we’ll get,” Stubblefield said.

The city is also working with the private owners of Booker T. Washington Cemetery in Tulsa to gain permission to scan the grounds, which researchers suspect could be home to another grave site.

Tulsa Mayor G.T. Bynum initiated an investigation into rumored mass graves of the Tulsa Race Massacre in October 2018, calling the riots a “point of shame for our community,” NBC affiliate KJRH reported at the time.

A decision on the next step regarding the suspected graves won’t be made for at least a few months as the Public Oversight Committee on the graves is scheduled to meet again in February. But experts recommended that the city secure the sites in the meantime.

If the city decides to go ahead with an excavation effort, several permits need to be approved.

The Tulsa Race Massacre, sometimes referred to as the Tulsa Race Riots, began in May 1921 after a Black teenager named Dick Rowland was falsely accused of having assaulted a white woman.

Rowland had entered an elevator where the operator, Sarah Page, screamed shortly after he arrived, according to the Tulsa Historical Society and Museum. Rowland was accused of sexually assaulting Page, and when he was arrested on May 31, a white mob demanded that the sheriff turn him over to them.

About 1,500 armed white men stood off against about 75 Black men outside the courthouse. Many on both sides of the conflict were World War I veterans.

The Black men retreated to the segregated city’s Greenwood District, popularly known as Black Wall Street because of the number of African-American businesses, as tensions escalated and gunfire was exchanged.

White rioters, led by the Ku Klux Klan, began burning Greenwood down early on June 1, looting many of the district’s Black businesses as the governor declared martial law and brought in the National Guard.

Official death tolls at the time accounted for 36 people killed in the riots, although experts have long believed that the number could be in the hundreds.

HBO’s “Watchmen” re-created the two-day event in its pilot episode in October. The show, based on the 1980s graphic novel, used the unsettling massacre to set the tone for its season.

“What is creating the most anxiety in America right now? And for me the answer is undeniably race,” Damon Lindelof, the showrunner for “Watchmen,” told NBC News. “Superheroes cannot defeat racism.”

The Tulsa Massacre, one of the worst incidents of racial violence in U.S. history, was one of several mass killings in cities around the country beginning in 1919.