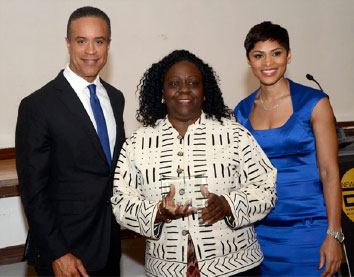 Sunday, December 1, 3-6 pm marks the world premiere showing of this film at Restoration Plaza, Bed-Stuy, which will be free and open to the public on a first-come, first-served basis.
California was the first state to pass the CROWN Act (Creating a Respectful and Open World for Natural Hair). However, Ms. Dente points out, “New York is the first state to adopt and enact the law.” California’s law does not go into effect until January 1, 2020. New York’s is already in place.

Several hair scenarios surfaced during the author’s conversation with Dente. She remembers the outrage over a New Jersey high school coach who cut off a wrestler’s dreadlocks minutes before a match. She also refers to the lesser-known but crucial case of Chastity Jones. An Alabama company selected her for a job interview over other on-line applicants, but when she showed up with her locs, they rescinded the job offer because she refused to cut them. She lost her case in court. Dente even remembers Melba Tolliver, of ABC, who refused to conceal her afro with a wig, and the station fired her from her anchor position in the 1970s. Dente notes those stories contrast with that of Joy Reid’s of MSNBC. Taking advantage of the New York’s CROWN Law, she recently replaced her straight hair with braids.

The thrust of “Hairtage” is two-fold, Dente explains. It sheds light on the natural hair liberation movement and provides the historical context for our hairstyling choices. The goal is that millennials and the general public understand how events such as Curlfest evolved. This annual gathering of women in New York and Atlanta celebrating natural beauty was decades in the making. According to Dente, the Black Pride movement originated with Marcus Garvey. It led to the Black is Beautiful movement of the 1960s, which evolved into the Grandassa Models. These women were famous for the African themed fashions and natural hairstyles they brought to the runway. Black Rose, combined modeling with her proprietorship of the first natural hair salon. The documentary also features June Terry, often referred to as “the first lady of natural hair.” They blazed a trail promoting the beauty of African fashion, hair, and skin

The CROWN Act is under consideration in New Jersey, and the following states have filed their version of the law: Michigan, Tennessee, Wisconsin, Kentucky, Illinois, Pennsylvania, Georgia, Massachusetts, Maryland, Florida, and South Carolina. The goal of Caravan TV is to “educate, inspire, and [expose] the history, culture, and concerns of people of African ancestry here in the USA.” Dente welcomes the use of this latest production to spur the other thirty-six states to action.

Her TV program “Cultural Caravan” has gotten the attention of journalists across the country. As recently as November 16, the New York Association of Black Journalists selected another documentary, “Conversations with Eagle Academy,” for the Public Affairs Journalism Award. The recognition Dent receives today has a long history leading up from 1986, when she founded the Joy of Performing Workshop which taught cultural literacy to young people ages 5-17 at the African Poetry Theater in Queens. She took advantage of the Queens Public TV free training in television program production and has consistently elevated her skills. In 2012, she linked with the cable station, NYC Media. This enabled her to share her TV programs to not only the five boroughs but also to Westchester, New Jersey, and some parts of Connecticut.

Born in Harlem, raised in Brooklyn, resettled in Queens, Ms. Dente, wants viewers of “Hairtage” to understand that the mothers of the natural hair movement, trailblazing black women, paved the way for the promotion of natural hair beauty, and courageous legislators such as Assemblyperson Tremaine Wright and Senator Jamaal Bailey led the New York charge to protect it. “The more people know our community, the more they respect our story,” says Dente.

(Look for Margo McKenzie’s biography The Arvelia Myers Story: “The Mother of Harlem Tennis in 2020.)