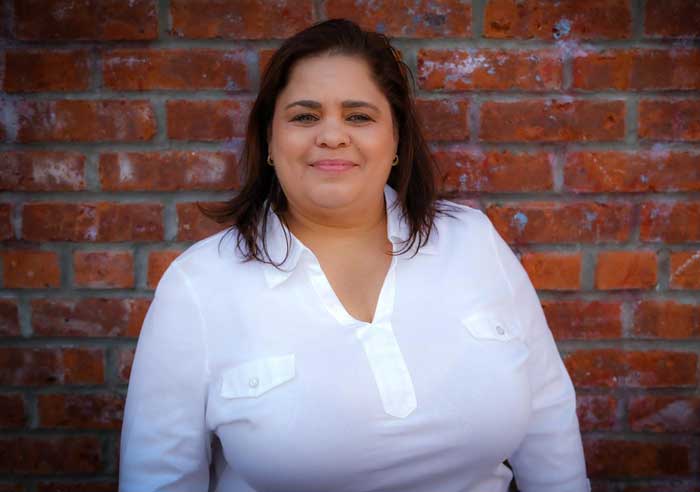 We first met Darma V. Diaz on the Rediscovering Lost Values tour, an educational program of the Brooklyn Anti-Violence Coalition, in which Civil and Human Rights history comes alive for tourgoers through visits to landmarks in the South, where battles for justice raged in the 60’s.

Ms. Diaz currently serves as the New York State Committee Woman and Female District Leader of the 54th Assembly District alongside Assemblyman Eric Dilan. But that may change next month following the November general election. The fierce ‘no-nonsense, go-getter” is going after the 37th City Council District seat (covering Bedford-Stuyvesant, Brownsville, Bushwick, Crown Heights, Cypress Hills, and East New York) vacated in January by former Council Member Rafael Espinal Jr.
Last spring, she gathered enough signatures to become the Democratic nominee for the District. She says she is ready to “earn the vote of her district” next month. But she is not on pause. She continues her work as a community advocate “reaching out to those that are struggling during these difficult times. We have a long way to go, many families to feed.”

Born in Williamsburg, Brooklyn to Puerto Rican American parents, Darma has been an advocate for the community for nearly three decades. She started her community service at age 18 with volunteer work at the 83rd precinct as an auxiliary police officer.
Our Time Press is proud to present Ms. Diaz in a two-part series.

Our Time Press: You are a Brooklyn-born Puerto Rican American woman. What should the mainland know about Puerto Rican cultural values, history and roots that we are not learning in schools?
Darma V. Diaz: The mainland should know that Puerto Ricans are American citizens. Cultural values on the island hold family & community at a higher value and are tighter knit than here on the mainland. The mainland should be educated about the Jones Act and its impact on the economic and political status of the island. The Jones Act is a maritime law that requires any imports to Puerto Rico to stop at the mainland before arriving to Puerto Rico, increasing the costs on consumers. In layperson’s terms, food prices are equal to those of prices in New York supermarkets, while mean incomes differ by a dramatic margin, so families are paying way more for food per capita.
Other important narratives to educate include the treatment of Puerto Ricans entering the mainland during the 1960’s who were treated as immigrants and forced to get passports, despite their citizenship. My father, for example, a Vietnam veteran who was injured during war, had to purchase a passport to travel between Puerto Rico and the mainland.
As for current events, the mainstream media—newspapers, TV news, and online news—do a poor job of reporting on events from Puerto Rico, and the other territories (US Virgin Islands, Guam, American Samoa, and the Northern Mariana Islands). One example: if the poverty rates of the territories were included in the poverty rankings of the states, they’d all take the top spots by a wide margin.

OTP: Puerto Rico is still not part of the “shared” American Story. Our children should know, for instance, that Arturo Schomburg, who lived in Bedford-Stuyvesant with his family, was born in Santurce, Puerto Rico. Who are some others?
DVD: Justice Sonia Sotomayor is the first impactful Puerto Rican New Yorker that comes to mind; she’s the first Supreme Court Judge to be of Puerto Rican descent. In that same line, I’d like to mention pioneer women in the legal field, like Betty Lugo & Carmen Pacheco who started the first Puerto Rican-run law firm and preside over the Puerto Rican Bar Association.
In addition, children should be informed about the work of the Young Lords. One example of the work of the Young Lords, includes The Garbage Offensive of the 1960’s where they cleaned up the neighborhoods and put the garbage out for collection, however, Sanitation neglected to pick it up.

The Young Lord’s decided to burn the garbage which pushed Sanitation to then pick it up.
Other examples include leading free breakfast programs, educational workshops for community members, and a tuberculosis testing program in the 1970s.
In the political arena, there are leaders like Adam Clayton Powell, IV.

OTP: What do you bring to the political table?
DVD: I’ve spent decades as an advocate and housing specialist in the East Brooklyn area. I’ve also spent significant time volunteering in education advocacy, youth programming, crime prevention and intervention, victims’ rights, community health care, LGBTQ rights, parks and the environment, economic development and small business advocacy.
This combined experience gives me a perspective of understanding how interconnected these issues are, and how one impacts the other. There is another name for this—a progressive, one with the credentials to back it up.

OTP: Councilpersons can propose legislation, but they also have the power to decide on any rezoning and building on city-owned property. What will you require of developers who will need your okay to proceed?
DVD: I plan to institute a point system when reviewing projects, as a way of depoliticizing the process. Examples of categories are the number of affordable units, the AMI of the affordable units, an outreach plan for hiring local construction workers (with clear language on recruiting women in construction), MWBE contracting, partnerships with local entities, environmental impacts and remediation plans, and more. Projects seeking a zoning variance will have to do the hard work of reaching out to the area, getting actual input from residents and local businesses, not just reviewing online statistics.
Too many projects get shot down because of a lack of real community input. The scorecard is one way that I can do my part to ensure that new projects meet the needs of the district. It is irresponsible to take an anti-real estate approach to community development. More than ever our district needs the jobs created by real estate. That doesn’t mean the industry can do what it wants.
All groups are welcome at my table, provided they genuinely put community first.

OTP: You believe in “holistic solutions for community problems” to encourage local empowerment. Can you provide examples of holistic solutions for education, jobs, health, etc.
DVD: My mission as a member of the NYC Council is to have holistic solutions for community problems. I mentioned above that I have a unique perspective on how interconnected issues are, because of my background.
In practice I would bring community stakeholders such as the local community boards, police precincts, and area nonprofit community-based service providers, local businesses, block associations, churches and more that provide resources to the table, to work together to address the needs of the community.
During COVID, we learned to navigate systems to get real results, and resources for the council district that included personal protective equipment, food, and access to information about education, health, jobs etc. The district has been hit especially hard given that it is enduring the COVID crisis with no representative in the council. Fortunately, mechanisms like social media have helped facilitate delivery of services and resources, but it’s not enough.
I also believe that part of being holistic is meeting people where they are, and not exclude any person or group. We need to include the people we are serving at the table, people need to drive their narrative, so that we as legislators can deliver to the community. That is how we empower the community holistically. Holistic approaches are needed in order to deliver the much-needed outcomes.

OTP: Regarding public health, do you think the community is being advised properly regarding the COVID epidemic, in terms of what is going on? Will your District be ready for the second wave?
DVD:As an advisory board member to a local clinic in my district and also having served as an advisory board member at local hospitals, it is my interpretation that services are being provided and being made available. However, our community is very complex and has been negatively impacted by service providers and intentions of the government therefore making it difficult to engage large sections of the district.

OTP:Where do you see yourself five years from now on the political scene?
DVD: In the 5 years, I hope to be serving in the second term in this Council seat accomplishing goals related to housing, bringing out the school system into the 21st Century, and having addressed the health disparities that affect District 37.

OTP: If Biden and Harris had the time to come to your community, where would you take them, who would you introduce them to?
DVD:I would take them to a section of my district where I have seen the most resources are needed at this time. During the last 6 months, I have seen enough evidence of the government disinvestment within and around the Florentino Houses. I would introduce them to the local Public Housing leaders and leaders along with Community based organizations who pledged throughout the years to help improve the conditions in the area, however have not been able to so by the lack of funding required. Holistic approaches are needed in order to deliver much needed outcomes.
(To be continued)

Fostering Confidence in the Community: An Interview with Barber Christian Thompson