Fostering Confidence in the Community: An Interview with Barber Christian Thompson
Advertisement 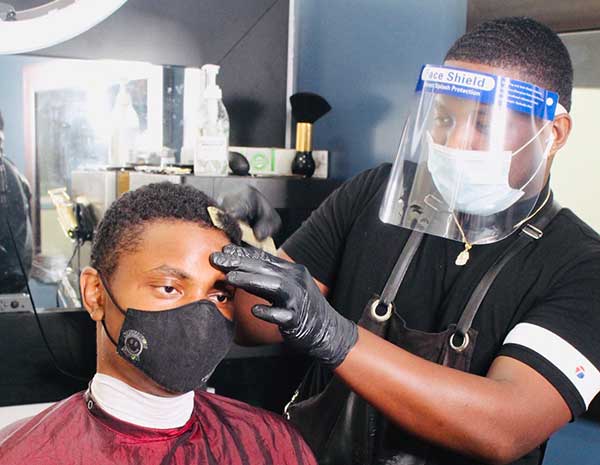 Since I was nine years old, I have called the Bed-Stuy, Crown Heights area home. The deaths of Breonna Taylor, George Floyd, and Ahmaud Arbery have inspired deeper conversations around BLM, policing, and proper local investment. Now it’s more important than ever to ask ourselves what we want and need within our community. In this column, I will interview local black business owners to collect their experiences and their thoughts on the community’s socio-economic, political state and how it has changed over time.

Christian Thompson, a 24 year old self-taught barber and artist who grew up in Bed-Stuy, cut my hair the other day following social distancing guidelines. Being a barber is no happenstance for Thompson. He loves his work. He has a BA in English and African Studies from The University of Albany, SUNY. He was actually an accountant before opening his own shop but realized the happiness he got from cutting hair superseded the lure of a higher salary. As he smoothly ran his gold clippers through my hair, he said, “cutting hair is like creating a fast portrait.” He lives to boost the confidence of others, to see their delighted faces. He knows making people look good can help them build the courage to get that job or apply for that school program. Thompson further explained that his work is a form of making the community visible and fostering a sense of camaraderie, something that is seriously lacking at the moment.

As Thompson looked out from his transparent face shield and surveyed the state of my hair, I asked him more about his experiences growing up in Bed-Stuy. He went to high school in Brownsville, NY, he said, an under-resourced school in an underdeveloped neighborhood. Thompson recounted, “I never understood why my teachers had to buy classroom supplies… using their own salaries.” He did understand though that his teachers were not getting paid enough and a lack of resources only made it harder for them to do their job. “It made me extremely sad to see, and it discouraged me from being a teacher myself,” he told me.
Unfortunately, school was not the only institution that failed him growing up. Thompson recalled being stopped by the police on numerous occasions, including for walking on the sidewalk in his school uniform and for biking legally to his mom’s house. Like most black men, Thompson learned from an early age to take his hands out of his pockets and to remove his hoodie to avoid being harassed by NYPD. Still cutting my hair contently, Thompson divulged, “honestly, growing up in the neighborhood taught me how police officers treated black people. It just seemed like they hated us.”

Thompson also commented on the races of cops when paired. “I think it’s also part of the law enforcement system in NYC to pair a white police officer with a Latin or black officer, but usually they treat you just the same as their white counterparts.” The policing system is the issue here, corrupt from within and perpetuating white supremacy even through their non-white actors. The police were never created to protect people of color but rather to oppress them. Moreover, at Thompson’s first BLM protest for Mike Brown in 2014, he was frightened and “felt the tension in the crowd… like people were still afraid to speak up during those times.” He was outside protesting “but you could tell that we were still being submissive to the oppression we were taught.”

When asked about what he wants to see in Bed-Stuy now, Thompson answered, “more community programs for black and brown kids.” Most of the programs were cancelled and other organizations like the YMCA now have fees. Thompson also expressed fear about the school to prison pipeline. He understands that we need supportive youth networks to actively avoid this nation’s inclination to criminalize black youth and that bringing people together is necessary for both the people’s wellbeing and the neighborhood’s. In fact, Thompson finds himself reminiscing over an earlier time when he felt there truly was more camaraderie in Brooklyn. A time “before the Barclay Center” with block parties and drum circles. But now due to “newcomer” complaints “the drummer circle is only allowed to play for two hours.” He further lamented, “I feel like there was more culture before it was gentrified.”

But Thompson is doing his own piece to bring about that ideal of community and culture he misses. When asked about his business and its connections to the black community, Thompson answered beautifully, “The barbershop is a safe place where a lot of black men feel like they can be vulnerable. They come in and can talk to their barber about whatever is going on in their lives. Black men are used to being judged harshly in society and I feel like barbershops are a space where they can be expressive and be themselves without being seen as a threat.”