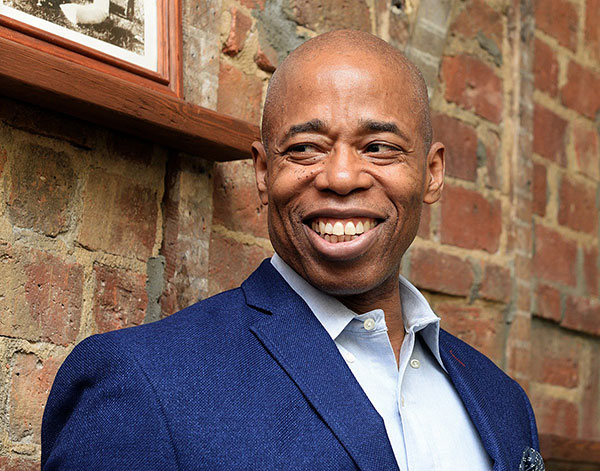 Eric Adams, President of the Borough of Brooklyn, served as an officer in the New York City Transit Police and then the New York City Police Department, for 22 years retiring at the rank of Captain. In 1994, he was defeated in the Democratic primary for a New York Congressional seat. From 2006 to 2013, he was a Democratic State Senator in the New York Senate (representing the 20th Senate District in Brooklyn). In November 2013, Adams was elected Brooklyn Borough President, the first African-American to hold the position. In November 2017 he was reelected.

Beginnings…
A review of my life’s journey shows that I have gone through a lot from being arrested as a young boy at 15 to turning that into a purposeful moment and becoming a police officer; starting 100 Blacks in Law Enforcement; spending 22 years in the department part of the small team of computer programmers that devised the first-of-its-kind using technology to monitor how to use technology in crime that later gave way to other versions; to going through the typical life of a person who’s trying to move into middleclass America; going to school at night to get my associate’s, my bachelor’s, my master’s; and then moving from a sergeant, to lieutenant to captain, becoming a state senator working on writing laws; and finally becoming a borough president.
It was great. About 20 years ago I spoke with my mentor, then Deputy Mayor Bill Lynch, after I saw that we were able to turn around this city’s law enforcement apparatus. We were a dysfunctional law enforcement agency where we were not preventing crimes, we were just responding to crimes. And once we saw how to do that, we learned how to do a better job of fighting crime. We were in a city where we were averaging 2,000 homicides a year and many of them were in Black and Brown communities.

Once I saw we can use technology to fight and deal with crime in our city — and this is the part of my resume many people are not aware of — I used my computer experience in that crime fighting effort. I went to Bill Lynch who said to me back then, “Eric, you may be right in your assessment of how to get the city operating and stop it from being dysfunctional. Right now, you have your Associate’s degree. I need you to go back to school and get your bachelor’s.” Instead, I went back and got my Masters, and paid my own way through CUNY. He then said, “You’re a sergeant, I need you to become a Lieutenant!” But I didn’t stop at Lieutenant, I continued to push, and I became a Captain.

Lynch said, “Learn how to write laws, become an Assembly person or State Senator.” I then became a State Senator. Then he said, “I need for you to become a Congressperson or the Borough President.” And as you know, I became the first Black Borough President of Brooklyn.
Look at every successful person in this city, if they are a chief, a sergeant, or a white-shoe law firm attorney, or a topnotch architect or engineer, you look at all those successful people and then you trace their path. Somewhere in their lineage is a blue-collar worker. Somewhere in their lineage is someone who has sacrificed something, they may not have a high level of education, they may not have a lot of money but what they had is not dollars and cents, they had common sense. We have not had a blue-collar mayor in over 70 years. I’m a blue-collar mayor. I’m a person that knows that we have to go back to common sense governing again.
I’m not Ivy League, I didn’t go to Harvard and Yale. As I indicated, as a child I went to jail. But you know what? I work hard, I know that New Yorkers work hard, and we need someone who has gone through a lot to help people who are going through a lot, and I’m the right person to move this city in the right direction.

So, I’ve been on this journey for over 20-something years because I know that our city is dysfunctional. We create crisis and those crises are because our city is inefficient, and inefficiencies lead to inequalities and give way to injustices. And that’s at the heart of my campaign. Taxpayers are doing their job, and paying taxes. We are not doing our job by using those tax dollars to run the city the way it ought to. And at the heart of my talking point is Archbishop Desmond Tutu. He said, “We spend a lifetime pulling people out of the river. No one goes upstream to prevent them from falling in in the first place.” That’s what we do in the city overall but mainly to Black and Brown and immigrant people where our policies are downstream policies and not upstream policies.

What do I mean by that? Just look at the cornerstone of dysfunctionality and that’s the Department of Education. We have good teachers, dedicated but the system is a failed system. One, we create three serious crises in the city. Number one, we create our health crisis. 17% of 12-year-olds in this city, in this country, have early signs of heart disease, and that’s really connected to the food we feed children. So, you have one agency like the Department of Health and Mental Hygiene, spending millions of dollars to fight childhood obesity, childhood diabetes, childhood asthma. Yet you have the Department of Education, feeding our children 960,000 meals and those meals cause childhood obesity, childhood diabetes, childhood asthma. That is what I talk about when I say we create our crisis.