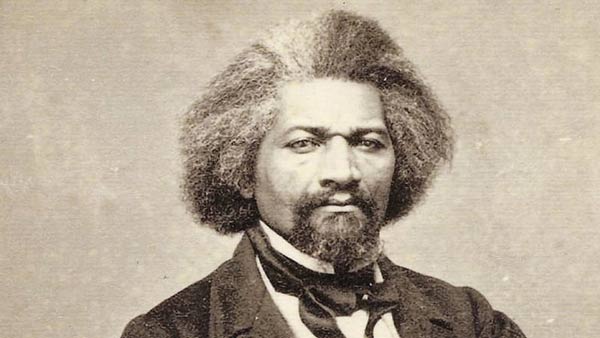 Ongoing Special Installation on View Beginning February 11, 2022
New York, NY January 5, 2022 The New-York Historical Society, the first museum in New York City, brings to life Frederick Douglass’ vision of freedom, citizenship, and equal rights in a new ongoing special installation, Our Composite Nation: Frederick Douglass’ America, opening February 11, 2022. Inspired by the speech “Composite Nation,” which Douglass delivered around the country in the years following the Civil War, this timely display is based on research from the Pulitzer Prize-winning book Frederick Douglass: Prophet of Freedom by New-York Historical Scholar Trustee David W. Blight. The mission of this new nation, Douglass declared, was to provide the world “a composite, perfect illustration of the unity of the human family.” For what was the U.S., he said, but “the most conspicuous example of composite nationality in the world.”

At the time of his speech, Frederick Douglass optimistically envisaged a multiethnic, multiracial, multireligious America “a nation that would,” as New-York Historical Trustee David Blight puts it, “spread liberty more broadly than any civilization had ever attempted. Alas we know now how, all too soon, Douglass’ optimism would be extinguished, his vision undermined by Jim Crow and other racist and anti-immigrant policies such as the Chinese Exclusion Act. Still, while Douglass’ vision remains to be fully realized, we have made progress as a nation. We hope that the story told by this exhibition will remind visitors of the hopes and dreams of one of our greatest Americans and inspire them to fulfill the ideals he championed in his words as well as his deeds.

Beginning in 1869 as Reconstruction unfolded across the country, Douglass took his “Composite Nation” speech on the road and shared his passionate vision for a reborn America, where rights and freedoms would be extended to all, regardless of race, gender, national origin, or faith. Lectures were popular in America, and Douglass was in high demand, traveling from the Northeast to the Midwest. Few speakers had his compelling personal story, skill at the podium, or moral authority. In his speech, Douglass advocated for absolute equality, which meant equal rights that were specific, inclusive, and protected by law. Yet during his lecture stop in Iowa, a hotel refused to serve him because of his race. This reinforced Douglass’ belief that rights and fair treatment must be fought for every day at every level, from constitutional amendments to life’s routine encounters.

On display is a range of artifacts and documents that illustrate Douglass’ vision during the postwar years when his goal seemed within reach. Among the highlights are illustrations from the popular press of the time and scrapbooks of articles by or about Douglass compiled by his sons that also documented his inexhaustible drive and never-ending commitment to a more just America. A speech excerpt from Douglass’ contemporary Frances Ellen Watkins Harper brings the question of gender to Douglass’ ideas about racial equality. His advocacy for Chinese immigration, a decade before the Chinese Exclusion Act. is also demonstrated through political cartoons and a copy of the newspaper Chinese American, a publication by Wong Chin Foo that asserted Chinese immigrants right to belong in the United States. Douglass argued the Chinese should be granted every freedom Americans expect, to become citizens, to vote, to run for office.

Also on view is the maquette of a statue of Douglass that was erected on the campus of the University of Maryland in 2015. The model was gifted to the late Congressman John Lewis and is on long-term loan to New-York Historical. A recreation of the Douglass statue that greets visitors to the Museum at the 77th Street entrance, painted to be lifelike, is also on display.