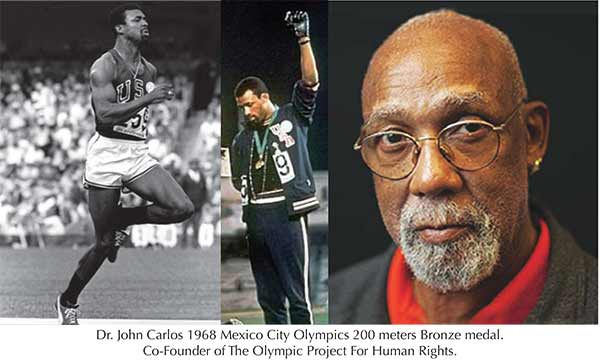 In 1968 Olympians Tommy Smith and John Carlos took their belief in Black Power and understanding of oppression, to the winner’s podium of the 400 meters race, and raised their fists in an image that is burned in history.
In the 52 years since, Carlos has maintained his vision of African Americans realizing their destiny is in their own hands.

Note:
This interview was done before the Philadelphia expo was cancelled.

David Mark Greaves: I was in college in ‘68, when you and Tommy Smith were up there on that podium. I was on a track team and that was so amazing! Even now it’s amazing. What do you feel now when you look back at that time and see that picture? What kind of emotions do you get from it?

John Carlos: I don’t feel any emotion. I feel it’s a part of me. It’s part of my spirit, my flesh. There’s no real emotion there other than the fact that I look back over the 50 years and I’ve seen so many people change their minds that were fearful of making a statement as an individual in this race called the human race. Not merely for the sake of color – but for the sake of right versus wrong, simple as that. And [people] had various theories. They say I’m willing to sacrifice the material they give to make a statement, because it’s far beyond making medals and trophies they give you.

JC:So to see that over the years, I’m gratified to see so many people come up and acknowledge to themselves that, ‘Maybe I could have contributed a little more.’

JC:Their standards… to bring individuals together to make a statement against oppression.

OTP:What did you think of Colin Kaepernick and his actions?

JC:I think it was a great thing. I think he had tremendous courage to get out there and do it. The only thought I have on him is that I don’t see the consistency. You come out on a platform and somebody is a victim of homicide and brutality and so forth, and perpetrators against Blacks and people of color, and then it goes flat.

OTP:Going forward, what kind of other changes do you see that are needed in the sports world – which, of course, is interconnected with everything else.

JC:I think we need to not focus on the sports world; in my sense right now man, the focus is on Black people. Half the Black people run away from the history of racism and other atrocities we had to endure, and now focus on self. What is wrong with us? Why everyone can come, when I see other ethnic groups join together and do something successfully, and in over 500 years we still can’t do it?

So, we need to come down and sit at the table and maybe have a discussion about how the conservative Blacks don’t hang out with the militant Blacks in terms of having dialogue at a table. How come the Black Catholics don’t get down with the black Baptists at the table and sit down and make them realize that it meant we won. You know, we might have all our own views and differences, but we can agree if we disagree on something. The main purpose is to solve the equation. What are we doing, or the lack of doing?

OTP:What can we do? Can we look into ourselves and make changes? Is that what you’re suggesting?

JC:And let’s start dissecting the issues that we have confronting us every day and roll our sleeves up and get busy trying to stop the equation.

OTP:Now, talk about bringing folks together. The internet seems to in some ways drive folks apart, whereby everyone just looks at the information the way they see it. How do we transcend that and bring people together, as you say?

It’s going to reach the masses. You know as a race of people, we’re very confused already.

OTP:What are the qualities of leadership? What do you look for in a leader?

JC:What I look for in a leader is a guy that has a current mind in terms of what it is here [that] he is confronted with in the paradigm. And how steady can he be? Then on the opposite, I see the odds and the evens – but at the same time, So now you build me a team trying to deal with all of the perspectives. Now, there are individuals out there, but how many individuals out there had a mass of people around them to work anything? That’s why I said there has to be inclusion, everybody at that table.

JC:There’s not a situation where I have a vision about what Black people should be doing. Everybody has a vision. Let’s hear what everyone’s visions is and see how far we are away from one another. Now we understand where we are. Now let’s move forward and try and create something. We’ve always been able to create chicken salad out of chicken shit.

OTP:Well, you say first we have to find out who we are and then we can determine what we’re… where we want to, and where we can go, and what we can do.

Advertisement
Related Topics:Black Historyolympics
Up Next

What to the Slave is the Fourth of July?

1948 Olympian Herbert Douglas Has His Say