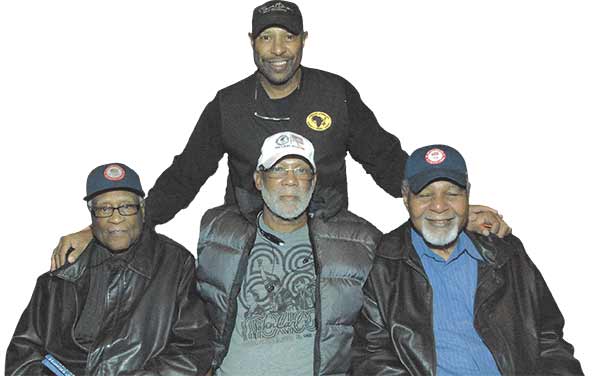 David Mark Greaves, Our Time Press:
You were scheduled to attend the African American Heritage event in Philly that was canceled. What were you most looking forward to?
HDJ: Well, I always want to help people as much as I possibly can. I know that Everett Staton, he works 24/7. He worked 24.7 on this and we have to help him. So, John Carlos, he’ll come up and be the speaker and then he’ll introduce me, and I am now the oldest living African American Olympic medalist.

OTP: You sound like Everett had qualities that you said your father had taught you: organization, initiating, follow-through. Could you tell us about that?
HDJ: My dad went blind, he went sightless at 41, and during that time, from then on, he taught me how to analyze, organize, initiate and follow through, and I’m only six years older than him when he died. He lived to be 20 days less than 92.

OTP: Wow!
HDJ: Yeah, so what did he do? Be independent. He didn’t want my mother to grab him by the arm taking her places where she wanted to go. So he was the first African American in 1930 to get a guide dog from The Seeing Eye company, in Montclair, New Jersey.

OTP: A quick personal question as a former track man. You’re a long-jump champion. What were your feelings and emotions when Bob Beamon made his incredible jump?
Oh… That was incredible! Yeah. He jumped 29 feet 2 1/2 inches! He didn’t stop at 28 feet. The world record was 27 feet 4 inches. He passed 28 feet and landed at 29 feet. But I actually believe, you know, he’s like 6’2 or ‘3, and some of these basketball players, I think you will agree… with the spring they have, they could jump 30 feet.

OTP: You’re probably right. You spoke of your father. What about your mother?
HDJ: Now my mother, when he went blind, he was 41 and she was 27. Fourteen years older than my grandmother. He felt so bad about it that he wanted her to find someone else to raise my sister and me. Now, ironically my sister was born on the same day that he went blind. Yeah, he’s a story within himself, how he ran a business for 30 years and 24 of those total years he was blind.
He had a storage garage and he treated every car in that garage and there were 200 and some cars in that garage. In the end, I had to work for three years and I worked from 8 at night to 8 in the morning, because he couldn’t get reliable young help. They would take cars out joyriding, so he had to depend on me and he said that’s the first time he felt his affliction.

The good people took defense jobs; he got a lot of young people and they were joyriding the cars and he was getting sued. He asked me, ‘Well you gotta quit school.’ I said, “I’ll do it.” I was at Xavier University and then I went onto Pitt on a football scholarship. Now think of this Mr. Greaves. I graduated and won three state championships in high school and they wouldn’t give me a scholarship. So I went to Xavier. I went under the tutelage of Ralph Metcalf. He placed second in 1932. Then at 1936 he came back and placed second again to Jesse Owens.

Yes. He was like a big brother to me. If the war hadn’t come along, I would have been down there as assistant coach to him, because he was really grooming me to be his assistant.

My family laid the foundation for me to have good work ethics and then they taught me how to be independent. My mom was with him all those years and we were lucky that she was there because she was more proud of me being in the Olympic games because we didn’t have anyone but Joe Louis and Jesse Owens during that time.

OTP: You were sort of joining them in that firmament, Jesse Owens and Joe Louis were also sort of a big representation of Black power.
HDJ: They did it for sports, and then Jesse he transcended and went beyond track and field. And Joe Louis was as smart as any of us; he just didn’t have the formal training. If Joe Louis had had the formal training, he could have been a doctor, a lawyer, anything like that. It used to kind of get under my craw, because all the comedians would say what he said after a fight. The one phrase and maybe you know it or maybe you’re too young to know. He was talking pretty good and then at the end, he said I’m glad I won. Then all of the comedians took that and ran with it.

Bernice: Excuse me, I’m Bernice Greaves. David’s wife. I have a question for you.

Bernice: Today, we get our information on the computer, the cell phone, the TV, everything. How was it back then, how did you get the information about Jesse Owens and Joe Louis? Was it word of mouth, Black papers, church, how did that happen?
HDJ: A couple of years ago I was on a program at Texas State University and there was a Black young journalist on the panel. So, she did the research and she found out that in the south the white writers and most of the white papers in the South, they wrote nothing, very little about Jesse Owens. That he won the 100, that he won the 200, he won the bronze but other than that nothing. In the north, which was supposed to be more liberal, they wrote about Jesse Owens, but very few of them wrote about the other four Black guys that won gold medals. Unless you were from the immediate city, they’d write about John Woodruff, Pittsburg, Cornelius Johnson on the West Coast in the high jump – he won a gold medal. Archie Ball Williams was a Tuskegee airman and he won a gold medal and Metcalf won a gold medal on the 4×1 relay team. But… The difference was then the Pittsburgh Courier would write an extensive article just like the whites would write extensive articles about the white athletes. And in the Black community, we got our coverage.

All the writers at that time were writing in the major papers and we didn’t have the coverage like we have today. I feel so proud when I see African American anchor Joy Reid. Fredricka Whitfield – she’s with CNN now. She came to some of my birthday parties, where she was the MC. Al Whitfield was her father and she called me Uncle Herbie.

Now the deal at the Games was, they put all of us in one Quonset hut in the Royal Air Force base. It was a blessing that they put all of us Blacks in one part of the Olympic residence. That’s how it was segregated back then in the 1930s and 40s. When I met Mandela I said, “You know all you guys are in one precinct,” and some of them were smarter than him. He was a boxer and he had intestinal fortitude to keep going. I listen to all the speeches and they were all good. You know, they were smart. Now it’s coming to the light that you can see how African Americans who are just as good as anyone else in the world just like we were in sports.

Sure. Well, looking at people like Barack Obama, Michelle Obama, had you imagined seeing them up there in the White House as you were growing up?

HDJ: Yup, you know why?
OTP: Why?
HDJ: Because I went through school with just about the same people and when I graduated this class only had three blacks in it, and I was the president of the homeroom class. That’s the fear, that’s the essence of fear, because if we are equal in the first through the twelfth grade, and they thought I should be the president – that’s why I thought that Obama would be the president. My friend Harrison Dillard. Said he couldn’t believe it because he went to a predominantly Black school and I went to a predominantly white school in high school and junior high.

Being with these kids every day, they start respecting you. So they respected Obama, and if they respect you… In fact, I had a very good friend named Reagen Henry. He owned 22 radio stations. He was a graduate of Harvard, and he was a good student, but everyone who pushed him was — well we weren’t in a position to push him, and the whites pushed him, and God bless him, he died at the age of 76. But when he died he owned 22 radio stations.

OTP: We’re talking about pushing people. When you were working for Schieffelin in the spirits industry, what were you able to achieve in terms of pushing people forward?
HDJ: In corporate America… I was just reading a letter, because I’m going to Pittsburgh where William J. Schieffelin, Jr. [was] the seventh generation to distribute Moet Hennessy in the United States. Now, he was one month older than me, and his birthday was February 9th and mine was March 9th. In 1906 his great grandfather gave a speech in Missouri and he said [that] the most embarrassing thing we have in the United States is the way we treat colored people. That was in 1906 and he said all the whites should join hands, go down with the whites in the south and try to rectify this problem.
I stayed with that company 30 years because I knew that William J Schieffelin the 5th, he was liberal, to the extent that in 1894 he joined hands with who? Booker T Washington. He’s the one that brought the Spaldings in, the Eastman Kodaks, he brought the rich people in.

OTP: Gotcha.
HDJ: He joined hands with Booker T. Washington and that’s why Booker T Washington was able to build Tuskegee Institute, now University, which is still in existence. His grandfather used to tell me he was eight years old when he went down there and they couldn’t – there was no place for them to stay in Tuskegee, so they stayed in a train car. He remembered that very vividly, and how his dad would go down there for board meetings. He was on the board for 55 years and of those years, 22 years, he was the head of the board of trustees. So he was liberal.
And there’s one thing that I feel was equivalent to making the Olympic team and winning a medal. When I left Schieffelin and Company 32 years ago, I left three African American vice presidents, and I hired 2 of them!