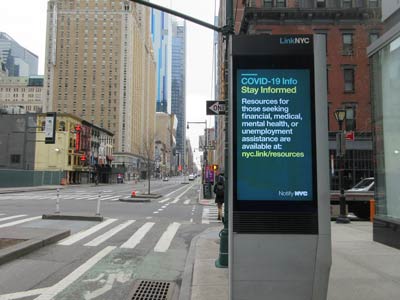 Governor Andrew M. Cuomo updated New Yorkers Tuesday on the state’s progress during the ongoing COVID-19 pandemic. A rise in cases during the fall and winter was to be expected and New Yorkers are urged to wear masks, socially distance and wash their hands and to be wary of gatherings.
New York State’s position during the pandemic is affected by an ongoing surge of COVID-19 throughout the United States. According to Johns Hopkins University, New York State has had the nation’s third-lowest positivity rate over the past week, behind Vermont and Maine.
“While New York’s COVID positivity remains the third-lowest in the nation, we continue to see increases in both new positive cases and hospital admissions, demonstrating we are not immune to the surge we are seeing throughout the rest of the nation,” Governor Cuomo said. “While we may be tired of COVID, it is not tired of us. It’s clear that COVID fatigue and a lack of compliance leads to viral spread, so it’s more important than ever that as we prepare for winter, each of us stays smart and New York Tough by taking simple everyday actions like washing hands, wearing masks and socially distancing. Likewise, local governments need to be vigilant and actively enforce public health law throughout the state.”
CDC Update:
The Centers for Disease Control and Prevention has issued new guidance on the use of face masks: They not only protect others, but they protect the wearer, too.
“Multi-layer cloth masks block release of exhaled respiratory particles into the environment,6 along with the microorganisms these particles carry.8  Cloth masks not only effectively block most large droplets, but they can also block the exhalation of fine droplets and particles (also often referred to as aerosols) which increase in number with the volume of speech.
“Studies demonstrate that cloth mask materials can also reduce wearers’ exposure to infectious droplets through filtration, including filtration of fine droplets and particles less than 10 microns. The relative filtration effectiveness of various masks has varied widely across studies, in large part due to variation in experimental design and particle sizes analyzed. Multiple layers of cloth with higher thread counts have demonstrated superior performance compared to single layers of cloth with lower thread counts, in some cases filtering nearly 50% of fine particles less than 1 micron . Some materials (e.g., polypropylene) may enhance filtering effectiveness by generating triboelectric charge (a form of static electricity) that enhances capture of charged particles, while others (e.g., silk) may help repel moist droplets and reduce fabric wetting and thus maintain breathability and comfort.”

De Blasio Warns New York Is ‘Dangerously Close’ to a Second COVID Wave
By Matt Stieb,
nymag.com/intelligencer
As the Trump administration ignores five straight days of new coronavirus infections topping 100,000 daily cases, New York City has largely avoided the nation’s fall surge, outside of hot spots in south Brooklyn, where in-person classes were closed in schools in nine zip codes in September.
But with infections rising aggressively in the early days of November, Mayor Bill de Blasio warned that the city is on the precipice of a second coronavirus wave. “It is getting dangerously close,” he said on Tuesday, adding that a continued surge in cases could lead to “a lot more restrictions. Unfortunately, it could mean even having to shut down parts of our economy again.”
In early October, New York City averaged around 500 to 700 new COVID cases per day. That number has now risen to over 1,000 cases per day over the last five days, a level that hasn’t been seen since May, according to the New York Times. Thankfully, both hospitalizations and deaths remain considerably lower than they did this spring; the actual caseload may also be lower now than in May, due to the expansion of testing over the past six months.
On Tuesday, de Blasio stated that he is watching three factors to determine if the city is facing a “full-blown second wave,” including the total number of cases, the number of hospitalizations, and the positive testing rate. The mayor has indicated that if that rate goes above 3 percent “on a sustained basis,” schools would suspend in-person classes. Over the past week, the average has been 2.26 percent of cases, and due to decreasing positive-test rates in some neighborhoods in south Brooklyn, 23 schools will reopen on Thursday.
If the testing rate, hospitalizations, and total cases continue to rise, de Blasio is reportedly planning on closing many nonessential businesses, though on Monday he said that it was only time to “re-evaluate” the restricted indoor dining currently allowed throughout the city. The mayor is expected to be far more proactive during the winter months of the pandemic than he was last spring, when he encouraged New Yorkers to keep going out to bars until mid-March. Unfortunately, the disastrous delays caused by sparring between de Blasio and Governor Andrew Cuomo over the city’s closing and opening is likely to continue.
New York City isn’t the only area in the region readying for a surge in cases. Across the Hudson, Governor Phil Murphy ordered that New Jersey’s bars and restaurants must close indoor activities by 10 p.m. as of Thursday.