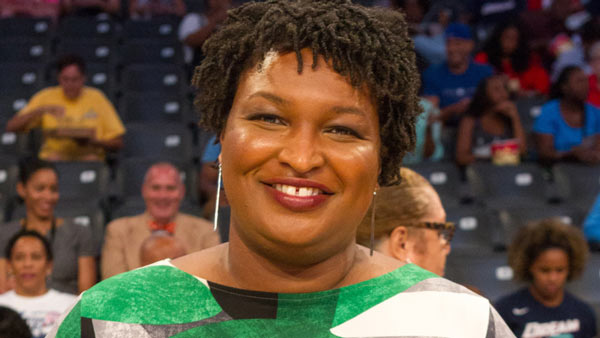 She’s Running for Governor of Georgia in 2022

Democrat Stacey Abrams announced Wednesday she’s running for governor of Georgia in 2022, setting the stage for a possible rematch against the current governor, Republican Brian Kemp, who narrowly beat Abrams in 2018.
Her entrance into the contest keeps the political spotlight on Georgia, which has become one of the most competitive and closely watched states in the nation.

Abrams, a former Democratic leader in the Georgia House who has emerged as a vocal voting rights advocate on the national stage, rose to prominence in the 2018 race, representing, for some, a possible future of the Democratic Party.
Abrams ultimately lost that election to Kemp by a margin of just 1.4 percentage points — the closest Georgia gubernatorial race in decades, according to the Atlanta Journal-Constitution. Abrams refused to concede that election, citing what she called voter suppression on behalf of Kemp, who was then overseeing the election as secretary of state. Kemp denied her accusations.

Brian Goode in Diversity Inc. writes, She (Abrams) has since become one of the stars of the Democratic party, especially in the South, helping to bring Black votes into the polls and contributing significantly to key Democratic victories in the state last year, including those of President Joe Biden and Senators ​​Raphael Warnock and Jon Ossoff.”
Despite her national profile, Abrams focused on Georgia in a video announcing her candidacy.
“I’m running for Governor because opportunity in our state shouldn’t be determined by zip code, background or access to power,” Abrams wrote on Twitter.

Kemp would have to get the GOP nomination again. He’s drawn the ire of former President Donald Trump for not helping to overturn the 2020 presidential election in the state, and pro-Trump Republicans have already lined up to challenge Kemp.
“Next November’s election for Governor is a battle for the soul of our state,” Kemp wrote on Twitter, after Abrams announced her bid. “I’m in the fight against Stacey Abrams, the failed Biden agenda, and their woke allies to keep Georgia the best place to live, work, and raise a family.”
If successful, Abrams would be the first Black governor in Georgia’s history and the first Black female governor in the nation.

And for the bettors, here’s one from betting experts via Newsweek. “Georgia is changing demographically, which is why we make Stacey Abrams 8-11 favorite to overturn her defeat to Brian Kemp from 2018. State elections are now dominated by the left-leaning Atlanta metro area, with Kemp requiring a massive groundswell of support from the rural Republican heartlands to stand a chance,” Chad Yeomans, Betway spokesperson, told Newsweek.

“They’ll know more than I ever knew”