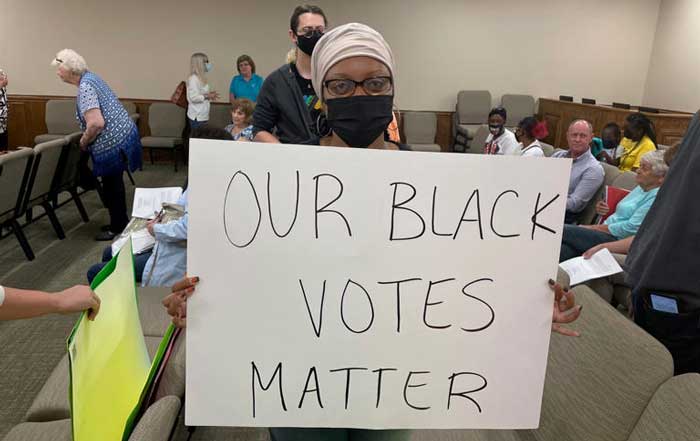 GRIFFIN, Georgia (Reuters) – Protesters filled the meeting room of the Spalding County Board of Elections in October, upset that the board had disallowed early voting on Sundays for the Nov. 2 municipal election. A year ago, Sunday voting had been instrumental in boosting turnout of Black voters.

But this was an entirely different five-member board than had overseen the last election. The Democratic majority of three Black women was gone. So was the Black elections supervisor.

Now a faction of three white Republicans controlled the board – thanks to a bill passed by the Republican-led Georgia legislature earlier this year. The Spalding board’s new chairman has endorsed former president Donald Trump’s false stolen-election claims on social media.The panel in Spalding, a rural patch south of Atlanta, is one of six county boards that Republicans have quietly reorganized in recent months through similar county-specific state legislation. The changes expanded the party’s power over choosing members of local election boards ahead of the crucial midterm Congressional elections in November 2022.

The unusual rash of restructurings follows the state’s passage of Senate Bill 202, which restricted ballot access statewide and allowed the Republican-controlled State Election Board to assume control of county boards it deems underperforming. The board immediately launched a performance review of the Democratic-leaning Fulton County board, which oversees part of Atlanta.

The Georgia restructurings are part of a national Republican effort to expand control over election administration in the wake of Trump’s false voter-fraud claims. Republican-led states such as Florida, Texas and Arizona have enacted new curbs on voter access this year. Backers of Trump’s false stolen-election claims are running campaigns for secretary of state – the top election official – in battleground states. And some Republicans in Wisconsin are seeking to eliminate the state’s bipartisan election commission and threatening its members with prosecution.

The stakes are high in Georgia, which last year backed a Democrat for president for the first time since 1992. Its first-term Democratic Senator Raphael Warnock will be up for reelection in 2022, a contest that could prove pivotal to which party controls Congress. The governor’s race next year pits incumbent Republican Brian Kemp against Trump-endorsed candidate David Perdue in a primary. The winner will likely face Democrat Stacey Abrams, a voting rights advocate. Both Warnock and Abrams are Black.

The county board restructurings and statewide voting restrictions, Democrats and voting-rights groups say, represent the most sweeping changes in decades to Georgia’s electoral system. Until 2013, Georgia elections operated under federal oversight to ensure fair participation for Black voters in this once-segregated Southern state.
Democrats say Republicans are trying to expand their control over election administration functions that should be nonpartisan. That could result in suppression of votes, they said, and could give Republicans control over certification of results, along with recounts and audits of contested elections.

“We are talking about a normalization of Republican takeovers of local functions,” says Saira Draper, director of voter protection for the Georgia Democratic Party.
Republicans say the changes aim to restore public trust in elections after many problems during the 2020 elections.
“What we want to make sure is that we have election integrity,” said Butch Miller, the No. 2 Republican in the Georgia Senate, a leading advocate for Senate Bill 202 and a sponsor of the bill to reconstitute the Lincoln County election board.

In five of the Georgia counties that restructured election boards – Troup, Morgan, Pickens, Stephens and Lincoln – the legislature shifted the power to appoint some or all election board members to local county commissions, all of which are currently controlled by Republicans. Previously, the appointments had been split evenly between the local Democratic and Republican parties, sometimes with other local entities controlling some appointments. The intent of the old system: To ensure a politically balanced or nonpartisan board.

In the sixth county, Spalding, the parties still choose two members each, but the fifth member is now chosen by local judges. (It used to be decided by a coin flip.) Those judges tend to be politically conservative; they appointed a white Republican to replace a Black Democrat on the election board, giving Republicans a 3-2 majority.
In Morgan County, the majority-Republican county commission reconstituted its election board, ousting two outspoken Black Democrats. In Troup County, a Black Democratic member claims the board shake-up was aimed at ousting her after she fought to increase voting access.

Reuters could not determine the exact split of Democrats and Republicans in the five counties that handed control to county commissions before and after their restructurings. That’s because board members’ party affiliation is not public information in Georgia, and board representatives declined to identify their allegiances.

RESTRICTING ACCESS
The county election boards have broad authority over voter access, such as polling locations and early-voting procedures. They also have considerable sway over post-election provisional-ballot tallies, audits and recounts.
Reconstituted boards in two of the six counties have already moved to restrict voting access. In addition to Spalding’s termination of Sunday voting, Lincoln County has proposed consolidating its seven precincts into one voting center, which critics say would discourage voting by people traveling from remote areas. Proponents say it would make voting more efficient and secure. The proposal is set for a vote on Thursday.

In Lincoln County, the new law removes appointments by political parties and gives the Republican-led county commission discretion to appoint the board’s three-member majority. County Republicans say the changes are meant to comply with a 2018 state Supreme Court ruling, which dictated that private entities cannot appoint members to government bodies. That decision, however, involved boards of ethics, not elections, and many other Georgia counties continue to allow political-party appointments to election boards.

The changes come in the wake of Trump’s false claims of election fraud. Trump won Spalding County with 60% of the 2020 vote. But his margin of victory declined by 4 percentage points from 2016 as turnout among Black voters jumped 20% in a county where the population is 35% black.

Trump supporters rifled through the dumpsters behind Spalding’s election office, looking for tossed ballots. None were found. Others demanded to watch the vote-counting. Sheriff’s deputies had to escort election workers to their cars. In Georgia and nationwide, some Trump supporters have threatened election officials with violence.
With conservative judges now choosing the county election board’s fifth member, the previous fifth member, Vera McIntosh, a Black Democrat, has been ousted. She was replaced by James Newland, who is also vice-chair of the county Republican Party. In September, he voted to end Sunday voting.

The board’s new chair is Ben Johnson, a former official of the county Republican party. Johnson declined to comment on his social media posts endorsing Trump’s false voter-fraud claims. He would not answer questions about whether he acknowledged that Biden won the 2020 election fairly.

McIntosh, the ousted Democrat, called the changes a “power grab” by local Republicans who wanted to “go back and prove the ‘Big Lie’ was real,” referring to Trump’s election-fraud claims.
“They wanted control,” she said. “They got control.”
The law restructuring Spalding’s board also required the elections supervisor to live in the county, a change that forced out the incumbent supervisor, Marcia Ridley. Two other Black Democrats on the board quit: Margaret Bentley and Glenda Henley, who cited objections to the law and harassment from Trump supporters.
Henley said the board’s meetings were increasingly attended by Trump supporters crying fraud. She called the tensions “exhausting” and said: “I have never been afraid in this town, but I am now.”

The restructured board still includes two Democrats, one of whom is Black.
Republican state representative David Knight from Spalding, who co-sponsored a bill to reconstitute the board, said the changes had nothing to do with race or partisanship. They aimed, he said, “to restore the integrity of our election board and voter confidence.”

On Election Day in 2020, voting machines malfunctioned in all 18 precincts, resulting in long waits. Republican Secretary of State Brad Raffensperger called for Ridley’s resignation, and the Republican-controlled State Election Board referred her handling of the problems to the state attorney general, who has to date not taken any action.
Ridley denies any mismanagement, saying her staff “worked hard to ensure that no voter got disenfranchised and all were able to vote.”

FREE AND FAIR?
In western Georgia’s Troup County, the Republican-controlled county commission now appoints all election board members, a power previously shared by three cities and the two political parties.
Lonnie Hollis, one of two Black female members, will leave the board at year-end. Hollis, who has served since 2013, said the restructuring was aimed at unseating her because she fought to increase voter access. Her efforts included advocating for the first voting location in a predominantly Black church in the county, which she said has multiple precincts in predominantly white churches.

Patrick Crews, the Republican chairman of Troup County commissioners, denied Hollis was targeted for removal.
“Our goal is to be inclusive and appoint members who are concerned about having fair and honest elections,” Crews said.

In Morgan County, two Black Democrats on the board, Helen Butler and Avery Jackson, were removed after the new law eliminated political-party appointments and handed appointment power to the Republican-dominated commission. Butler and Jackson sought reappointments but were denied.
The commission chair, Philipp von Hanstein, did not respond to a comment request.
Butler has long advocated for voting rights and social justice. Testifying before a special U.S. Senate subcommittee in July, she said she was ousted for fighting the closure of polling locations and advocating for ballot drop boxes.
Butler warned that the restructurings could “enable members of the majority party to overturn election results they do not like.”