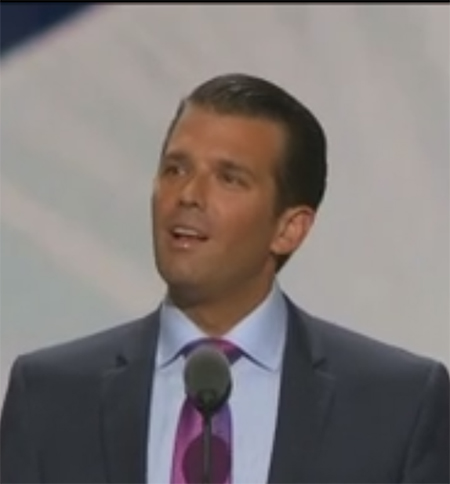 Whether it is on some screen or at night, as of last night at the Republican National Convention, “His Eyes are on Another Prize???”

Seventeen years ago, July 16, John F. Kennedy, Jr., at age 38, died in a plane crash.  Current high-profile magazine covers and stories remember that fatal day and are querying how the presidency would have looked with him in office, or whether he even thought of ever running.  The stories are hopeful.

Just as there are stories out there waxing nostalgic for Michelle and Barack. Already!

and more like the courtly Kennedys and Obamas..  So the conversation shifts from “mess” to look who’s coming to dinner … with manner, values and good values.  Even making The Donald and his wife look like mom-and-pop.

The kinds of things that ring deep with Americans.

So could it be that The Donald has accomplished what he really set out to do?

The younger Donald was looking like a presidential candidate. Whether Hillary wins and Donald loses, 2020 has begun.  And there is no guarantee that either will be second-termers.

Everyone in corporate America and Downtown Brooklyn knows, advance strategic planning is key to success. Before you know it, 2020 will be here.

And in television interviews, Omarosa Manigualt, Trump’s Black in charge of Black Outreach, is already telling us to forget about everything else that’s gone down, like the plagiarism.  We really should know about Melania’s skills as a mother, and meet her, and Trump’s son. (Bernice Elizabeth Green)

Mothers of the Movement