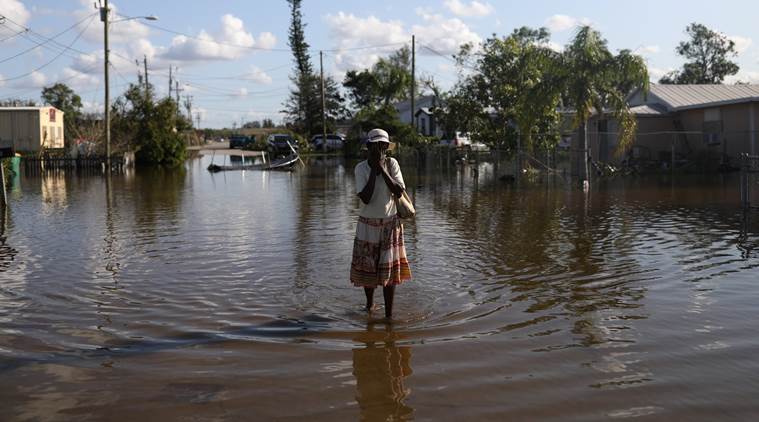 Today, I saw some pictures of the damage that Hurricane Irma caused last week during its terror into the Caribbean Islands. In St. Maarten, dozens of yachts and boats of varying sizes laid atop one another as if some gigantic child had dumped a pile of his favorite toy ships along the shore in his sandbox. I saw a progression picture of the island of Virgin Gorda that revealed that when the winds of Irma tore through, basically all of the green foliage was stripped away, leaving it brown and virtually barren. And, for the first time in 300 years, there isn’t one person that is currently inhabiting the island of Barbuda. The island has been completely destroyed, every structure flattened; of its 1,800 residents, only abandoned pets and livestock remain.

The Caribbean is the most tourism-dependent region in the world; 27 million visitors a year, spending $29.5 billion dollars (a lot of that money leaks out of the region in the form of international businesses that cater to the region’s tourism without actually being of the region). Almost half of the visitors are American. While for many of our community, the Caribbean represents home, a place of birth or an origin of their family roots, a bigger percentage of Americans view the Caribbean as a playground, a destination that’s forever sunny and warm where you can jet-ski and snorkel, and visit on a cruise ship and always feel welcomed. And if you should happen to wander off of the ship, natives are always in the marketplace willing to sell you a souvenir or even to braid your hair with beads. And if you stay at one of those nice resorts, you can enjoy a chartered tour of the island followed by a spa day, and later you can experience some of the island’s best cuisine for dinner. No matter the island, the supreme attention on service to international visitors seems to be the same.

Americans, we love to watch train wrecks. Isn’t rubbernecking in traffic always due to an accident on the other side of the highway, people simply slowing up to have a look at the carnage? During hurricane season, weathermen thoroughly enjoy the drama associated with having to report and forecast a hurricane for television. Where is it going to land? How fast are the winds moving? Our local meteorologists tell us everything we need to know about these storms, even if they have absolutely no chance of reaching us. If you tell us that a hurricane has formed, we will follow your reporting and forecasting as that hurricane travels and develops, just waiting to see if it is going to make landfall somewhere against the East Coast. I think that because we rarely get to experience that kind of inclement weather, New Yorkers have this thing with hurricanes that we secretly root for one of them to make that peculiar turn towards the north, just enough to bring us in on all of the fun.

However, in most cases, standing in between America’s shores and the hurricanes bearing down on them, are the Caribbean Islands. And so, by the time a system reaches Florida, Louisiana or the Texas Panhandle, in most cases they have already left a path of destruction on its way here. When Texas was battered by Hurricane Harvey, many of our celebrities went to work immediately to raise money for the victims of the hurricane. Houston Texans lineman J.J. Watt was able to raise over $30 million for Harvey survivors. America always finds ways to pony-up the resources to help in the aftermath of a natural disaster in our backyard.

But what about the disasters that happen in our playgrounds?

Those islands destroyed by Irma, their economy depends heavily on the tourism industry. Indirectly, more than 2 million jobs are created due to tourism in the region. And, unlike the States, where even the most vicious storm cannot completely destroy our industrial infrastructure, a Category 5 hurricane can steal an island’s prosperity, leaving the residents unable to fend for themselves. That clear water and pink sand that we enjoy on our holidays means nothing when an island’s infrastructure is ruined, destroyed beyond repair. And the people have to deal with losing everything. And unlike the citizens here, they don’t have rich allies like Kevin Hart or J.J. Watt sending the call out to raise resources. But they should. Those that would use the Caribbean as their destination for beauty and bacchanal should respond now in the same way that the islands respond to their needs for sun and service during a vacation visit. Actor Robert DeNiro recently pledged to help rebuild Barbuda, citing that he loves the island as a place of refuge and wishes to give back to the island as a way to return the favors he’s experienced there as a vacationer. He has the right idea.