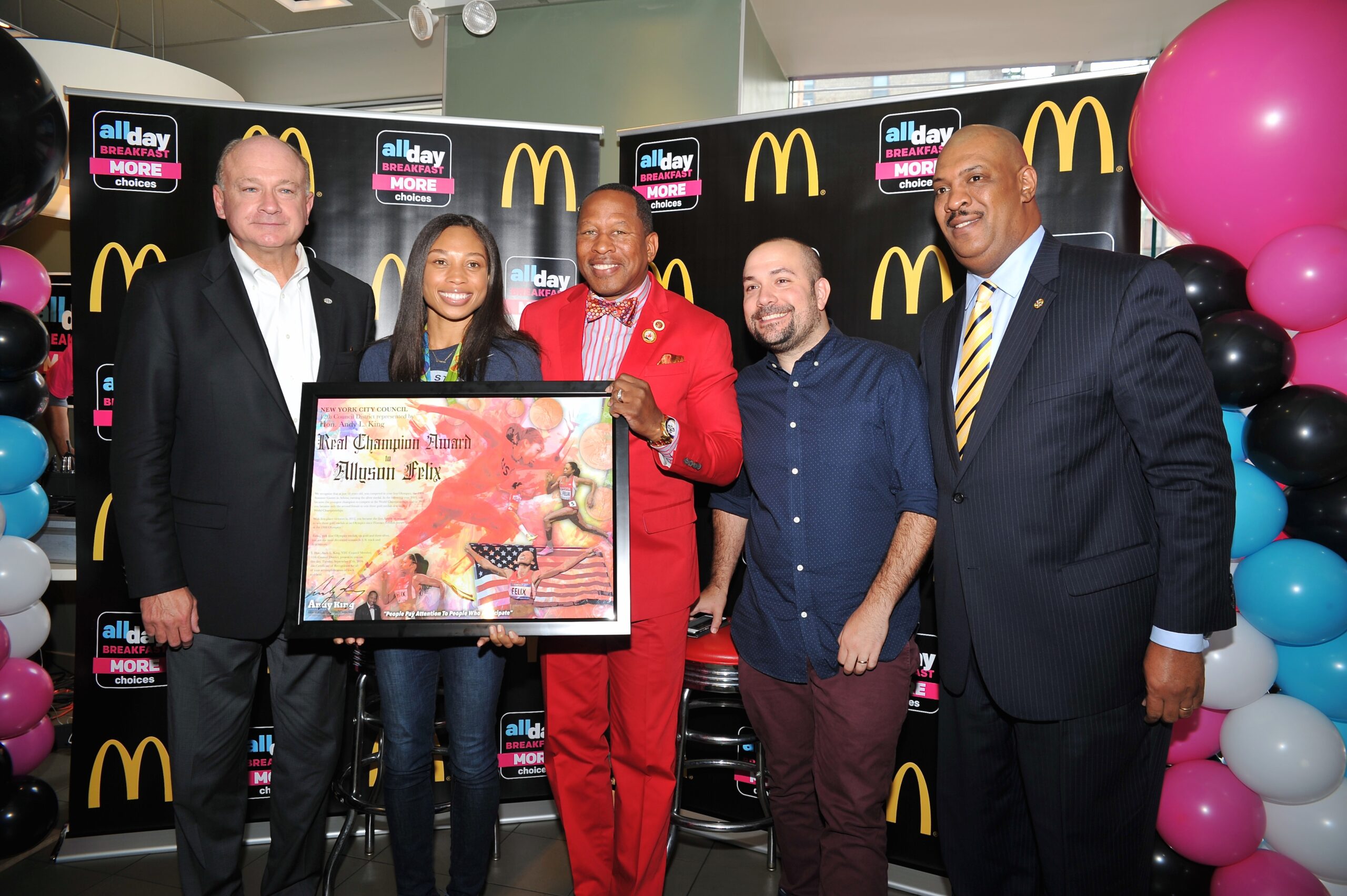 Hundreds of people attended McDonald’s launch party on Sept. 27 at the store’s Chelsea eatery on Sixth Avenue, where City Councilman Andy King presented the nine-time gold medal winner with the “All Champions Award” from the City Council.  “It’s always a delight to be in the presence of a champion,” Councilman King said.

Over a late breakfast of new all-day items like the McGriddles breakfast sandwich, the bacon, egg and cheese biscuit and hash browns, guests were treated to sounds from the Brooklyn United Marching Band, which performed a medley of tunes to the delight of passersby before filing into the restaurant. Inside, the McDonald’s Gospel Choir then belted out a McDonald’s jingle to the tune of “Happy.”

Ronald McDonald, the Brooklyn Nets Dancers, as well as the mascot of the New York Mets, Mr. Met, put huge smiles on all of the children’s faces as they stole the show! Children from the “Young Minds in Motion” from Staten Island attended the event.

Hot 97 radio personality Peter Rosenberg hosted the launch, and later interviewed Felix on her time in the Olympics and how she gets ready for the games.  “This is my fourth games, and you kind of know what to expect,” Felix said. “But it’s still so much fun. The excitement and the atmosphere – that never gets old.”  She said she’s not sure if she’ll compete in the next summer games, but in the meantime, she is enjoying her downtime with family and friends. “I definitely relax after I compete,” the Olympic champion said. “I get a lot of hugs. Families tell me where they were watching with their kids, and that means so much.”

Last year, the fast-food giant launched its All-Day Breakfast Menu, but limited it to only a few of its popular items. Paul Handel, the McDonald’s restaurant owner, told the Harlem News that the company decided to expand its breakfast offerings because customers asked for more options. Handel said the company also made an effort to improve the quality of its meals, and is now using real butter instead of margarine and cage-free eggs. “We started breakfast in 1973, and we weren’t sure if this was going to work,” Handel said. “Breakfast is a huge part of our business. Customers are asking us for this and we’re listening. While we expand our breakfast menu, we want to give you the best ingredients we possibly can.”