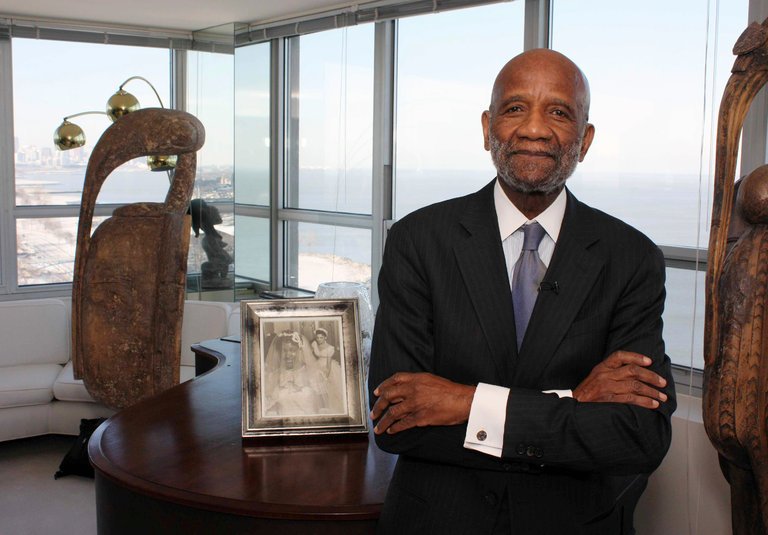 Another of our mighty trees has fallen and the impact will be felt around the world. Lerone Bennett Jr., 89, made an extraordinary contribution as a historian and author and to the field of journalism. He died at his home in the Kenwood neighborhood of Chicago’s South Side on February 14th of complications from vascular dementia, a cruel blow for such a superior intellect.

Born in Clarksdale, Miss., Bennett grew up in Jackson and earned his bachelor’s degree from Morehouse in Atlanta, where he and Dr. Martin Luther King Jr. were classmates. He served in the Army during the Korean War and pursued a career in journalism after returning home. His first job in the field was as city editor for the Atlanta Daily World. In 1953, he moved to Chicago to take a job as associate editor of Johnson Publishing’s Jet magazine. He became associate editor for the company’s Ebony magazine in 1954 and senior editor in 1958. He interviewed Dr. King about the Montgomery bus boycott in 1955, one of the first of many articles in Ebony about King’s civil rights crusade.

Bennett devoted his great mind to people of African descent, seeking to inspire as much as inform. While working for Ebony, Bennett also taught as a visiting professor of history at Northwestern University.

The author of the 1962 classic, “Before the Mayflower: A History of Black America,” which has been hailed as a critical component to the comprehension of a peoples’ history. Bennett repeatedly updated the book in subsequent editions to include events such as the Civil Rights Movement.

Bennett Jr. also wrote, “What Manner of Man: A Biography of Martin Luther King” in 1964, “Confrontation: Black and White” in 1965, a collection of essays, “The Challenge of Blackness,” in 1970 and “The Shaping of Black America” in 1975. Among his most controversial work was his 2000 book about Abraham Lincoln, “Forced Into Glory,” which cast Lincoln in shadow as a racist and white supremacist who practiced a politics of expediency rather than of mission and service.

Rev. Jesse Jackson, Sr. president of the Rainbow/PUSH Coalition, said. “His legacy of scholarship and activism is writing history and making history.”

“He gave Ebony its voice and its perspective on empowering African-Americans, and also was very much a champion of civil rights,” said Ebony Media CEO Linda Johnson Rice. “And everything that he did, he did with class and with style.”

Bennett remained at Ebony, becoming its executive editor in 1987 before retiring from the magazine in 2003.

“I can’t remember a time when I didn’t know Lerone Bennett,” said Johnson Rice. “I watched him work side by side with my father to create the editorial direction at Ebony. What Ebony stands for today really stands on the foundation of what Lerone Bennett envisioned for the magazine and what he championed for the years that he worked with us.”

Bennett was on the board of trustees of Columbia College and of the Chicago History Museum. President Bill Clinton appointed him to the President’s Committee on the Arts and Humanities, and President George W. Bush named him to the Presidential Commission on the proposed National Museum of African-American History and Culture. Bennett also sat on the board of the Chicago Public Library while Harold Washington was mayor.

One of the biggest surprises for Bennett was a resolution by the state of Mississippi commending his literary career as one of the state’s most successful Black writers of the 20thcCentury.“

Bennett’s wife, Gloria, whom he met when she was an associate editor at Jet and married in 1956, died in 2009. A son, Lerone III, died of lymphoma in 2013. He is also survived by three daughters, Alma Joy, Constance and Courtney, as well as three granddaughters.

A Real-World Member of the Dora Milaje