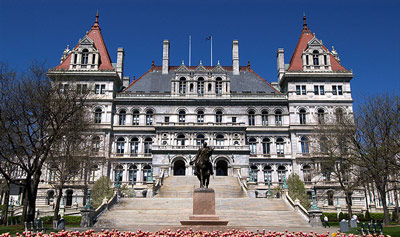 Schools to get record $29.5b in aid; and nursing homes, green initiatives, excluded workers to benefit, as well

New York’s wealthiest residents and companies will pay more in taxes to help their less fortunate neighbors. And the agreement could not come at a better time.

“I am particularly proud that we have been able to make historic investments in our schools, keep higher education within reach, deliver the relief that our small businesses need to get back on their feet, and provide critical funding for childcare that families need,” said Assembly Speaker Carl Heastie, D-Bronx.
Most of the final details on the budget agreement have not yet been released, but Gov. Andrew Cuomo and legislative leaders laid out some of the broad points Tuesday afternoon.

New York will spend a record $29.5 billion in aid for schools, with a commitment to boost that funding again in the coming years. That funding will help low-income school districts invest in resources that weren’t previously attainable.
The budget will allocate $2.4 billion for childcare services. Nursing homes will also be subject to new changes in state law under this year’s budget agreement. For one, they will be required to use at least 70% of their total revenue on direct patient care, with 40% of that for staffing.

New York will also legalize mobile sports betting in this year’s state budget. Details on the plan were not released.
The budget includes:
A record $29.5 billion in aid to schools aid
$29 billion in public and private green economy investments
$2.4 billion for rent and homeowner relief
$2.4 billion for childcare
$2.1 billion for excluded workers
$111 billion in total state operating funds
$212 billion in all funds spending
$1 billion for small business recovery
A first-in-the-nation plan to make broadband internet affordable
Legalizing mobile sports betting
Implementing comprehensive nursing home reforms
Media reports credit progressives protests inside the State Capitol and in New York City, and pledges to keep the pressure on for more taxes and more spending as the budget was finalized.