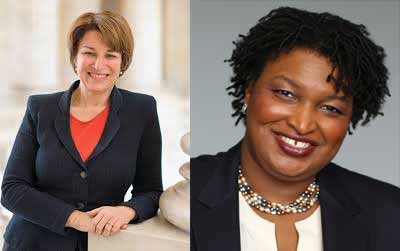 In her statement after coming in third in the New Hampshire Democratic Primary, Amy Klobuchar spoke of her family’s history, from her coal-mining great-grandfather to her alcoholic father. It was an emotional story of grit and determination and it is one that will go very far in the African-American and Latino community. If her team is able to get that story out, and she’s able to answer for her negative racial record as a prosecutor, she could eat into Biden’s base in Nevada and South Carolina. Her personal story will also go a long way with suburban moms, who themselves may feel they’re just holding on.

Both Senator Bernie Sanders and Pete Buttigieg have large and enthusiastic followings. Neither will give any quarter to the other. Both also have large segments of voters who simply will not vote for them for political and personal reasons. Amy Klobuchar could easily be their compromise nominee. And Michael Bloomberg’s carefully crafted media campaign with its bottomless funding and evocative imagery and messaging, will be seen for what it is: a billionaire trying to buy an election.

And if Klobuchar as the presidential nominee, selected the woman who should have been governor of Georgia, Stacey Abrams, as her choice for vice president, then that ticket will bring out a vote across a wide spectrum of everyday people. They will be having parties with Buffalo wings, waiting to watch the the Klobuchar/Trump and Abrams /Pence Debates.

Of course, white women are a potential problem. Fifty-three (53%) of them voted for Trump in 2016. Hopefully, that was just a Hillary thing and they’ve learned their lesson. But still, they have to be watched. And as for the white men who are full-out Trump supporters, they’re not voting for any other candidate, so there’s nothing to lose there.

Or it could be Sanders and Abrams if he takes his foot off the Medicare-For-All pedal. Either way, we can count on Buffalo wing-worthy debates and a nail-biting election night.
Meanwhile, a reminder that politics is not a spectator sport. Send money to the candidates of your choice, and any amount is good. They’re going to need it.