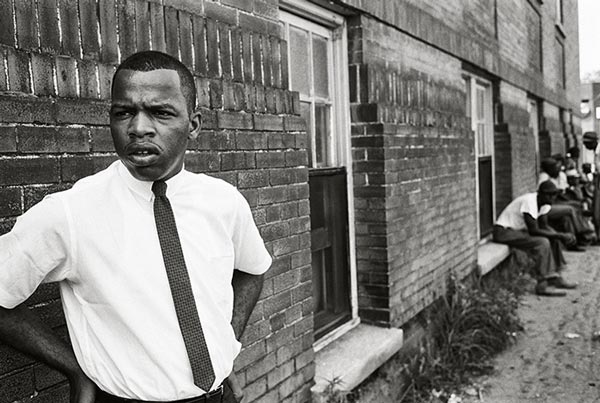 John Lewis, who went from being the youngest leader of the 1963 March on Washington to a long-serving congressman from Georgia and icon of the civil rights movement, has died. He was 80.
In December 2019, he was diagnosed with pancreatic cancer.
As a leader of the Student Nonviolent Coordinating Committee, Lewis was a committed participant in some of the key moments of the movement — an original Freedom Rider in 1961, a principal speaker at the March on Washington in 1963, one of those brutally clubbed during a 1965 march in Selma, Ala. Through it all, he faced taunts, beatings and dozens of arrests.

“In the face of what John considered the evils of segregation, he was fearless,” said longtime SNCC activist Courtland Cox.
By his middle years, he was in Congress and sometimes referred to it as its “conscience.” Years later, he was a witness to the inauguration of Barack Obama, the first African American president.

“Generations from now,” Obama said when awarding him a Medal of Freedom in 2011, “when parents teach their children what is meant by courage, the story of John Lewis will come to mind — an American who knew that change could not wait for some other person or some other time; whose life is a lesson in the fierce urgency of now.”
John Robert Lewis was born in Troy, Alabama, on Feb. 21, 1940, one of 10 children of Eddie and Willie Mae Lewis. According to “March,” his three-part autobiography in graphic novel form, he dreamed from a young age of being a preacher. He was in charge of taking care of his family’s chickens and would practice sermons on them: “I preached to my chickens just about every night.”

His early years predated the big burst of activism that would begin in the mid 1950s. “Growing up in rural Alabama,” he wrote in “March,” “my parents knew it could be dangerous to make any waves.” Even after the 1954 Brown v. Board of Education decision, nothing much changed in his rural community.

As a teen, Lewis met both Rosa Parks and Rev. Martin Luther King Jr. In 1957, he went to the American Baptist Theological Seminary in Nashville, where he connected with some of the people who would become leading lights of the civil rights movement: Diane Nash, James Bevel, Jim Lawson, Bernard Lafayette and C.T. Vivian.
“By the fall of ’58, my eyes were opening in many ways,” he wrote in “Walking With the Wind: A Memoir of the Movement,” his 1998 memoir. Lewis would help launch SNCC, an organization founded as an offshoot of the Southern Christian Leadership Conference led by King and dedicated to the principles of nonviolence.

The movement had begun to blossom. It took a further step forward with the first sit-in in Greensboro, N.C., at a lunch counter at a Woolworth’s in February 1960. The Nashville activists were soon emulating the tactic, starting with lunch counters and moving on other establishments, such as movie theaters. During one sit-in, a restaurant owner turned a fumigating machine on Lewis and Bevel and left. “Were we not human to him?” Lewis wondered.
“What we found, as we pushed our protests deeper into the heart of segregated society,” Lewis wrote in “March,” “was that our nonviolent actions were met with increasingly more violent responses.”

In May 1961, Lewis headed south with the first Freedom Riders, an integrated group of bus riders who traveled from Washington to integrate the facilities of interstate bus terminals. Lewis was the first of the riders to be assaulted, during a stop in Rock Hill, S.C. He was punched and kicked. Lewis would be assaulted again in Montgomery, Ala., where he was knocked unconscious.

“I could feel my knees collapse and then nothing,” Lewis recalled, according to “Freedom Riders: 1961 and the Struggle for Racial Justice” by Raymond Arsenault. “Everything turned white for an instant, then black.”
For his trouble, he would subsequently be jailed, ending up in Mississippi’s notorious Parchman Farm. In the fall of 1961, however, the campaign yielded results: All interstate travel facilities were integrated.

“The fare was paid in blood,” Lewis wrote in “March,” “but the Freedom Rides stirred the national consciousness and awoke the hearts and minds of a generation.”
SNCC veteran Cox said in 2020: “John’s fundamental belief of confronting the evils of segregation that was pervasive in the South allowed him to ‘march into hell for a heavenly cause.’”

In 1963, Lewis became SNCC‘s chairman. That made him the head of one of the six leading civil rights organizations working on the Aug. 28 March of Washington for Jobs and Freedom that was being planned by A. Philip Randolph, a labor leader and elder statesman of the civil rights movement. Randolph had been trying to organize such a march since 1941.
The others were King, James Farmer Jr. (Congress of Racial Equality), Roy Wilkins (National Association for the Advancement of Colored People) and Whitney Young Jr. (National Urban League).

Lewis was the youngest of the so-called “Big Six” and, as soon became evident, the most militant. In the final hours leading up to the event, some of his fellow leaders panicked over what Lewis planned to say.

“In the original draft of his speech,” David Remnick wrote in 2009, “the demand for racial justice and ‘serious revolution‘ was so fearless that, in the last minutes before the program began, Dr. King, Bayard Rustin, Roy Wilkins, and other movement organizers negotiated with him to remove any phrases that might offend the Kennedy administration.”
Lewis’ line that “the revolution is at hand” alarmed the old guard of the movement. So did his assertion that “we will march through the South, through the heart of Dixie, the way Sherman did.” Lewis, as always, was committed to nonviolence, but his fellow leaders feared he would be misconstrued.

Randolph spent hours mediating between Lewis and other leaders, trying to get Lewis to edit his speech. The discussion was heated and emotional, but ultimately Lewis made some changes.
“I was angry, but when we were done, I was satisfied,” Lewis later wrote in “Walking With the Wind.”

“The speech still had fire. It still had bite, certainly more teeth than any other speech made that day. It still had an edge, with no talk of ‘Negroes’ — I spoke instead of “black citizens” and “the black masses,’ the only speaker that day to use those phrases.”
Shortly after Lewis spoke, King took the podium and offered his “I Have a Dream” speech. Lewis would later write he didn’t consider it King’s best speech, but added: “Considering the context and setting and the timing of this one, it was a truly a masterpiece, truly immortal.”
The year 1964 brought the Freedom Summer, a SNCC-led attempt to register and educate as many voters as possible in Mississippi. Lewis recruited students from around the country to join the effort, including Andrew Goodman and Michael Schwerner, who would be brutally slain along with James Chaney.

On March 7, 1965, Lewis was again involved in a milestone of the movement. “In Selma, Lewis led a march across the Edmund Pettus Bridge straight into a blockade set up by Alabama state troopers. The first nightstick came down on Lewis’s skull,” Remnick wrote in 2009.
In his memoir, Lewis said Alabama’s “Bloody Sunday” was a strange day from the get-go. “It was somber and subdued, almost like a funeral procession,” he wrote in “Walking With the Wind“ of the march he led with Hosea Williams. “There were no big names up front, no celebrities. This was just plain folks moving through the streets of Selma.”
Calling him “a personal hero,” Sen. John McCain described Lewis‘ actions that day as exemplary of America’s most basic dreams. “In America, we have always believed that if the day was a disappointment, we would win tomorrow,” McCain wrote in 2018‘s “The Restless Wave.” “That’s what John Lewis believed when he marched across this bridge.”
The footage of the beatings that day in Alabama pushed President Lyndon B. Johnson to action on civil rights legislation. “Something about that day in Selma touched a nerve deeper than anything that had come before,” Lewis later wrote.

After Selma and with each passing month, SNCC became more militant. The organization grew to reflect the disappointment of those who saw progress as coming too slow. “Something was born in Selma, but something died there, too,” Lewis wrote in “Walking With the Wind.” “The road of nonviolence had essentially run out.” (King’s assassination in 1968 was another devastating blow against those advocating nonviolence.)
In 1966, Lewis lost the chairmanship to Stokely Carmichael, champion of the slogan “Black Power.” “My life, my identity, most of my very existence, was tied to SNCC,” Lewis recalled in “Walking With the Wind.” “Now, so suddenly, I felt put out to pasture.”
In 1968, he worked on the presidential campaign of Robert F. Kennedy. On the night of the California primary, he was with the campaign at the Ambassador Hotel in Los Angeles when Kennedy was shot and killed by Sirhan Sirhan.

Lewis moved on to the Voter Education Project in 1970, and in 1977 made his first stab at electoral politics, running unsuccessfully for a House seat in Georgia.
After a stint on Atlanta’s City Council, he tried again for the House in 1986 and won, edging out fellow activist Julian Bond. He remained in the House after that, an ardent Democratic partisan but one who said that his mission never changed.

“My overarching duty,” Lewis wrote in 1998, “as I declared during that 1986 campaign and during every campaign since then, has been to uphold and apply to our entire society the principles which formed the foundation of the movement to which I have devoted my entire life.” Lewis spent years pushing for a National Museum of African American History and Culture in Washington, introducing legislation every year until it finally passed in 2003. “Giving up on dreams is not an option for me,” he wrote when the museum opened in 2016.
Though not an author of much in the way of major legislation, some issues drew out his eloquence. In March 2010, in the final stages of the fierce debate over the Affordable Care Act, he fought for its passage. “This may be the most important vote that we cast as members of this body,” Lewis said. “We have a moral obligation today, tonight, to make health care a right and not a privilege.”

In 2016, he was one of the leaders of a unique sit-in on the House floor in support of gun-safety legislation. “Give us a vote. Let us vote. We came here to do our job,” he said. (The sit-in failed.)
As time passed, he came to be seen as the living embodiment of the civil rights movement.
Lewis’ cancer diagnosis at the end of 2019 led to an outpouring of support. “There is no more important New Year’s resolution, and it begins right now: pray for John Lewis,” tweeted NPR’s Scott Simon. On that day, Obama tweeted: “If there’s one thing I love about @RepJohnLewis, it’s his incomparable will to fight. I know he’s got a lot more of that left in him.“

In 2009, Lewis met with a white man named Elwin Wilson, who was among those who assaulted Lewis and other Freedom Riders in 1961. Following Obama’s election in 2008, Wilson said he had an epiphany and traveled to Washington to apologize for his violent acts and seek Lewis’ forgiveness. Lewis gave it freely.

“It’s in keeping with the philosophy of nonviolence,” Lewis later told the New York Times. “That’s what the movement was always about, to have the capacity to forgive and move toward reconciliation.”
John Bresnahan contributed to this article.