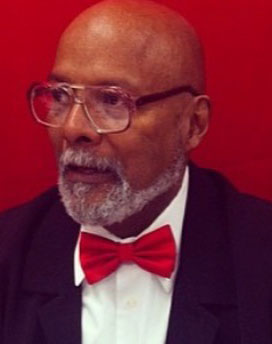 James Mortimer, loving husband and father, exemplary community and youth empowerment advocate and pioneering entrepreneur, passed on Saturday, January 21 at Columbia Presbyterian Hospital in the presence of his wife Doris and family members.

Mortimer, known as “Big Jim” to many throughout New York City, was so anointed the title because of his generosity of spirit, time and wisdom as much as for his demeanor and his height.

A leader before his time, Jimmy reached great heights in his lifetime against immense odds.

The Brooklyn-native, a long-time resident of Lower Manhattan, attended public schools in Brooklyn, Manhattan and Washington, D.C., as well as  Chamberlain Junior College in Boston, Massachusetts and The College of New Rochelle in Brooklyn.  His primary interest was mathematics and problem solving. Those gifts and his dedication to his family’s work-ethic traditions — which found him holding down several after-school jobs while at Decatur J.H.S. 35 and Wingate H.S. – carried him through life.

He served in the United States Army for two years, training at bases in Fort Dix, N.J.,  Aberdeen Maryland, Fort Chaffee, Arkansas and Nahant, Massachusetts where he became a missile man, “one of the guys that would in case of danger, shoot off the missile.”

He was one of the first persons of color to study IBM and computer science courses, including keypunch operations, and programming, during the early 1960’s.  His immense command of the field, at that time, landed him a position at the Olivetti Underwood Company, where he parlayed a job as night supervisor into recognition as a gifted programmer and then a professional evaluator of the company’s affirmative action programs.

Mr. Mortimer was always self-motivated.  He started Big Jim’s Trucking Company, later Big Jim and Edgar’s company, in 1972. Four years later he opened a thrift shop in what is now SoHo, at Spring and Broadway in New York City.  In 1978, he opened a furniture manufacturing company, making him possibly the first African American to manufacture redwood tables and clocks in the New York City area.

He also held positions with HRA, the Environmental Protection Department, and HPD as a Real Property Manager.

A man of prayer and a believer, Mr. Mortimer was a member of Mariner’s Temple Baptist Church, and its choir and men’s fellowship club.  He was most proud of being a member of the committee that selected the first woman to serve as a senior pastor an American Baptist Church. His work in community advocacy included his Board of Director work with his co-op Gouverneur Gardens.

Mr. Mortimer leaves behind stories of his incredible journey, and spirit to his wife, Doris; his son James ; daughter Chantese (Jabron); and his grandchildren, James Mortimer IV, Bianca Marcelino, Jalin Sinclair, and Tyler Mortimer. His sisters and brothers who predeceased him were: Delores Brown, Freida Smith, Patricia Jones, Rhoda Barnes, and Jeffrey Barnes. His living siblings are Carolyn Moyer, Lee Jones, Marilyn Jones, Wanda Jones, Lynette Jones, Denise Barnes, and Melvin Barnes. To say he will be missed, doesn’t come close to the size of the void that has been created in the lives of his vast extended family but … When James “Big Jim” Mortimer, a leader in the grassroots community, passed, he left a gift behind for all of us. The similarities between Mr. James Mortimer’s story of his journey and author Willard Motley’s 1960 “Let No Man Write My Epitaph” end with the overall message of the book’s haunting title and overall theme: a lesson in how not to permit the sordid matters of life, inaction and silence, overpower dreams.

The similarities between Mr. James Mortimer’s story of his journey and author Willard Motley’s 1960 “Let No Man Write My Epitaph”  end with the overall message of the book’s haunting title and overall theme:  a lesson in how not to permit the sordid matters of life, inaction and silence, overpower dreams.

When Mortimer passed last Saturday, he left behind for his family HIS story written in his words. And I know that the man known to my siblings as “Big Jim,” a Believer, would want it known that his “epitaph” was forged by the pen-and ink of a Higher Power.

Mortimer’s story is a depiction of triumph in the face of adversity and he knew that an obituary item would not fully capture highlights of one Black man’s struggle in the racial world of the 50’s and 60’s, outside the spotlight of the Civil Rights Movement.

So in writing down his thoughts, honestly, he left a gift that details the journeys he took to affirm why he, his voice and his life mattered.  Next week, we present his story, written in his words.   (Bernice Elizabeth Green/Legacy Ventures)

From this Ground: Seeds of Kindness Fulfill a Hunger