From this Ground: Seeds of Kindness Fulfill a Hunger
Advertisement 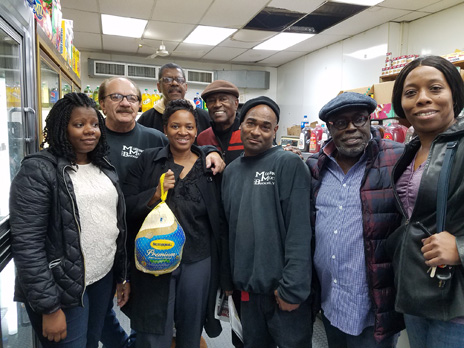 November is the month of caring, sharing and giving. But we’ve noticed that lines populated by those in need of these attentions have stretched longer since last spring.

Just outside our door, people of all ages with carts get into formation on Thursday mornings before the early light of dawn to receive fresh fruit and vegetables dispensed at noon. The wait in the cold is no sacrifice, it’s common sense. The objective is to obtain the first numbers to assure the bounty – apples, squash, onions and green peppers – doesn’t run out before the number is called.

At community centers, churches and pantries throughout Central Brooklyn there’s always a place – from a hallway aligned with a NYCHA tenant’s dinner-ladened tables to private homes, to small businesses and community gardens – where people deprived of a kind economy, considerations and courtesies can go.

And while they are under attack more than ever, where would they be without many of the faith institutions that appear to come to full bloom in fall? Spright and youthful nonagenarian Irene Evans coordinates the kitchen at Bridge Street AWME Church.  Her team cooked for three days, November 14 to November 16, for their annual pre-Thanksgiving servings to anyone who wanted a meal one week before Thanksgiving Day.   More than 300 people of all economic classes, all backgrounds, races, creeds and stations in life showed up.  She reports the line is getting longer. “But we feed whoever comes through that door.”

Evans reminds us of the generosity of the spirit and labor from folks such as Lemuel and Charlotte Mial, the two Brendas, carpenter Berrus and so many more of Mial’s team, who for many years transformed Herbert Von King Park and Cultural Arts Center into a sanctuary for the neighborhood where every kind of need was satisfied, not just for the hungry at Thanksgiving but for everyone all year round.

In Manhattan, mornings at a church on 31st Street near Penn Station homeless men and women coming from everywhere in the city line up for hot cups of coffee. At night, one of the most creative affordable housing developments ever developed thrives quietly.

Three-by-three brown boxes aligned along buildings stand out of the way of passersby.  In these ultimate of studios and micro-living spaces, domiciliaries without furniture, the tightly curled bodies of mostly thin men and women ensures these cardboard city residents will have free self-generated heat all winter.

Thanksgiving Day no longer looks like the Turkey Day portrait painted by the brilliant Norman Rockwell. And those who stand on line do not always “look poor”.

Says Ms. Evans, as repeated these days by vicars,  social servants and the ladies over at Eleanor Roosevelt, Sumner, Marcy who have always shared what little they have, “Anybody and everybody who is hungry is offered a plate”.

But this 2016 Thanksgiving feels different: a pall has settled in since the Presidential Elections.

For the last 10 years, this writer and offspring have taken some time during Thanksgiving Day to remember Native Americans.

As special consideration is given to the brave, spirited Lakota — who would dare to protect this land from where we receive the bounty that nourishes our bodies, souls and insights — we realize that in that effort we can find some joy and the knowledge that the people who make America great are the people on the ground who believe in cultures of sharing, giving and caring; the people who manage and administer.

And the people who show up year after year with faith in the America that refuses to forget them.

Following are some of the great things that have happened and are happening on the ground this Thanksgiving month.  That we could do for them all year long manifests the legacies of Mr. Mial and Ms. Evans, and such faith institutions as the historic Concord Baptist Church of Christ, Bridge Street and so many others.

Seeds of Kindness underscore ONE BROOKLYN

On Tuesday at 11:00 AM, Brooklyn Borough President Eric L. Adams distributed over 1,000 turkeys with accompanying healthy trimmings to more than 125 local food pantries and houses of worship that are serving Brooklynites in need this Thanksgiving.

In addition, as part of his Seeds of Kindness initiative, he presented MetroCards donated by local clergy to nonprofit organizations that will distribute them to underserved residents needing transit assistance as they apply for jobs or seek social services. Borough President Adams will give thanks for the sponsors and volunteers who made this distribution possible, and will speak to the spirit of One Brooklyn in giving back during the holiday season.

Through the support of local businesses, each participating household received a free meal package, which included a frozen turkey and trimmings. Low-income households, women who represent the majority of single heads of households, and seniors often struggle to provide for their families, particularly during the holiday season.

Governor Cuomo announced a partnership with Walmart, Wegman’s, FreshDirect and the Coca-Cola Company to feed over 35,000 New Yorkers this Thanksgiving Week. Cuomo said, “This partnership will provide families throughout the state with a warm meal to enjoy with loved ones. This week and throughout the holiday season I encourage all New Yorkers to reach out to their neighbors and find ways to pitch in and help those in need”. Each meal includes turkey, stuffing, pumpkin pie, vegetables, cranberry sauce and potatoes. Coca-Cola distributed over 3,000 beverages; FreshDirect provided thousands of boxes to ensure the meals are properly packaged and delivered. Walmart’s donation of thousands of meals adds to the more than 7.5 million meals the company – the nation’s largest retailer –has donated in New York State so far this fiscal year. Said one executive, “There are far too many people in our country that go to bed hungry or are unsure where their next meal is coming from. We’re strongly committed to being a part of the solution in the fight against hunger in New York and across the nation”. Wegman’s Food Markets, Inc. CEO Danny Wegman said, “We are committed to supporting hunger relief efforts throughout the year. This time of year provides a wonderful opportunity to give back to our communities”.

Publishers’ Note: A special thank you to Mr. Albert Scott of East New York,
Mr. Vincent Freeman of Sugar Hill Restaurant, and Mr. & Mrs. Norman and
Jacqueline Scott (whose apartment overlooks the Charles C. Pinn Triangle)
for their kind assistance to Our Time Press on stories that took place,
November 19.

UPSTATE JOURNAL: A River, Tugboats and a Field of Dreams