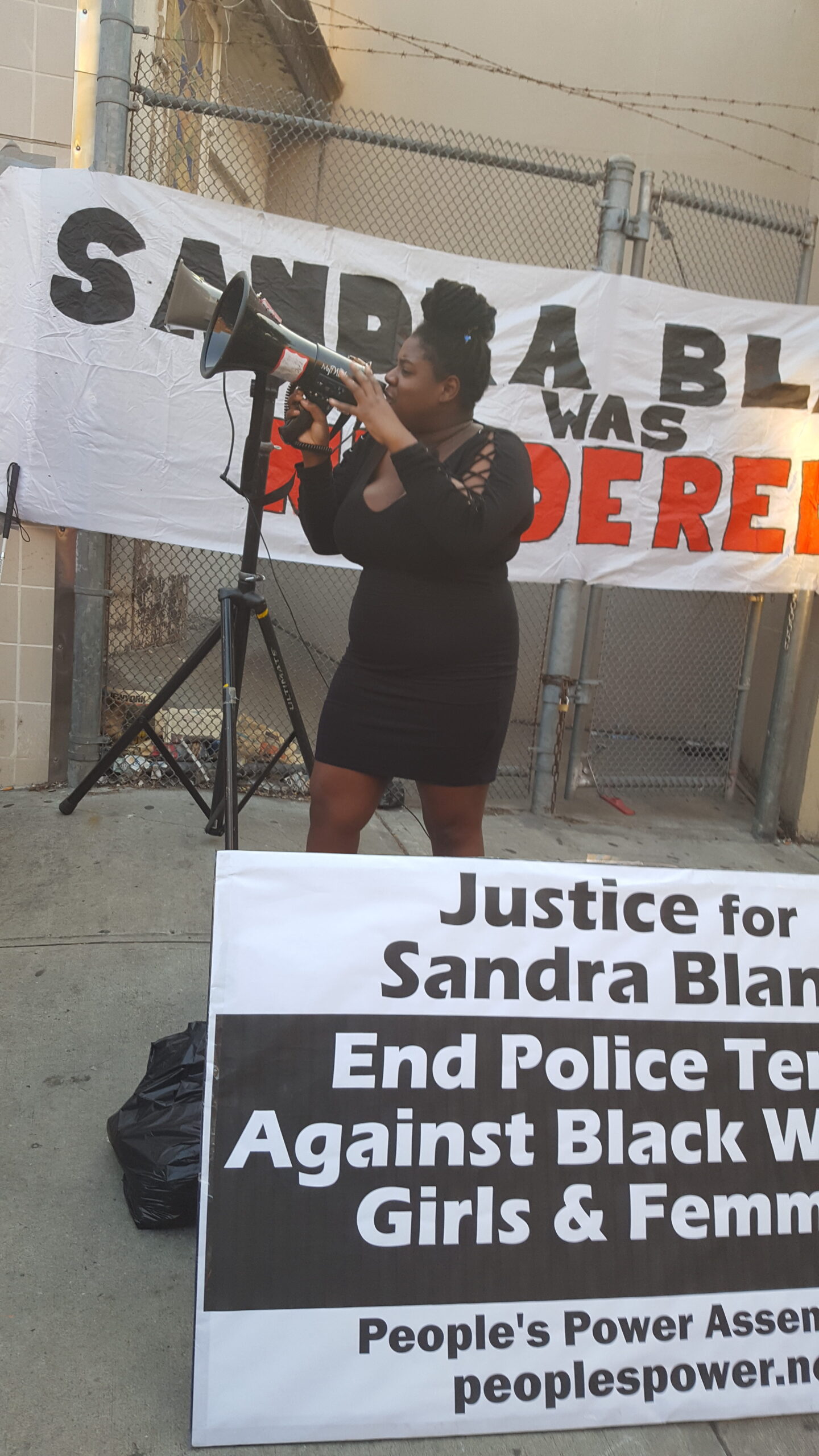 The incidents of African-American women being brutalized or slain is increasing to a point that the rallying cry of “Say Her Name!” can be heard from coast to coast in the United States. The causes of the deaths are questionable. Friday, July 13, 2018, Equality for Flatbush and People’s Power Assembly NYC sponsored the Justice for Sandra Bland and All Black Women Rally and March outside of the Church Avenue Q/B subway station.

The protestors covered the sidewalk and as more people joined the throng, the people spilled onto E. 18th Street and Church Avenue. New York Police Officers were in full force working crowd control, however, they used restraint. Kerbie Joseph from The Party for Socialism and Liberation led the chant, “Our Streets, Our Block! We don’t need these killer cops!” Kerbie Joseph said, “It’s been three years since Sandra Bland was killed in her prison cell. We need to stand in unity with her. This is an epidemic. It’s not an isolated occurrence. Every 28 hours someone is violated by the police.” Joseph continued by saying, “It is your right to come out every night and chant against police brutality.” She left the place designated for speechmaking after getting the crowd to chant several times, “All around the world, defend Black women and girls!”

This rally was in honor of Sandra Bland who died in July 2015 and other women. Who was Sandra Bland and how did she die? Sandra Bland was a 28-year-old Chicagoan who received a job offer from her alma mater Prairie View A & M University located in Waller County, TX. A Texas State Trooper stopped her for not signaling before switching lanes. The result of this stop was one of Bland’s arms got injured and she was arrested for assaulting a police officer. On July 13, 2015, Bland was found dead in her prison cell, the cause being “suicide by asphyxiation.”

The Bland family has not accepted that Sandra had committed suicide because she looked upon her college position as a dream job. Add to this, Waller County has a history of racism and brutality. These facts had her family and other concerned African-Americans dig deeper into the situation. What they found was the arresting officer’s car had no footage of the police stop of her car. The Bureau of Justice Statistics started counting jail deaths in 2000 but did not start distributing the statistics until 2011. The 2015 data will not be available for distribution until the fourth quarter of 2018. The data reveals there were 1,069 jail deaths, of which 364 were suicides. Another controversy in the imprisonment and death of Sandra Bland is that there is a belief in certain quarters that her prison photograph could be a picture of her corpse. This belief is based on the fact that the background is the same color as the prison floor. She is clothed in an orange prison jumpsuit, whereas new inmates are typically dressed in street clothing.

While waiting for the march to start, Workers World Party member Kayla H. commented, “Black women are the fastest-growing population in prisons. No one is free until Black women are free. She followed this by calling out the names of women who were killed by police officers and added, ‘I’m definitely anti-capitalistic. It is the root of colonialism and capitalism.’”

Another slain woman recognized during this rally and march was Kyam Livingston. Kyam Livingston is a case of being vilified and experiencing medical neglect. Livingston was a 37-year-old woman who, through an order of protection, was permitted to reside within her grandmother’s (Theresa Johnson) home but disallowed Livingston from drinking alcohol or arguing with her grandmother there. Due to her unsteady walking, Ms. Johnson believed Kyam was inebriated and therefore called the police to remove her from the home on Friday, July 19, 2013. Livingston was put in a cell with 15 other women. Livingston complained of stomach pains and diarrhea. The other inmates were sympathetic to her situation and began to bang on the jail bars and calling to the officers to aid her. The inmates cleared a bench to give Livingston a place to lie down. Livingston began convulsing. A female jail staffer, upon seeing the convulsions said, “Just let it play out.” The female jail staffer explained she had a grandson who experienced convulsions. Sometime in the late hours of Saturday, July 20, 2013, jail staff called Emergency Medical Services (EMS) to take Livingston to a hospital. Early Sunday morning, July 21, 2013, Kyam Livingston died twenty minutes before EMS arrived and at approximately 10:00 AM, EMS came to Anita Livingston’s (her mother) home to inform her of her daughter’s passing.

The autopsy was performed on Tuesday, July 23, 2013 at Kings County Hospital wherein the Chief Medical Examiner documented the death due to seizure complicating chronic alcoholism. This does not mean Kyam Livingston died from being drunk. In fact, Livingston’s toxicology report proves she was sober.

The Justice for Sandra Bland and All Black Women event transformed from a rally to a march smoothly. The body marched east on Church Avenue and turned north onto Flatbush Avenue. At the corner of Flatbush Avenue and Parkside Avenue, the body marched west on Parkside and turned north into Ocean Avenue with NYPD in tow. Chants included, “When Black girls are under attack, what do you do? Stand up! Fight Back!” and “We want justice for Kyam Livingston, killed in a Brooklyn cell!” There were more than ten NYPD cars following the marchers. The event went beyond the official 9 PM end time.

A Movement to Erect More Statues of Women in NYC

Dr. Carlos Russell: A Man of Consequence in these Uncertain Times