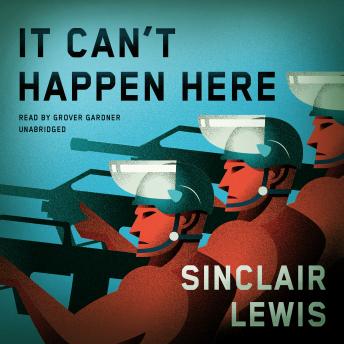 Book Review
This novel is set during the election of 1936, and focuses on a journalist named Jessup as he watches national events unfold in a terrifying way. A Democratic candidate, Berzelius “Buzz” Windrip” secures the nomination for the presidency (defeating FDR in a primary) and then  wallops Republican candidate Walt Trowbridge in the general.

After Inauguration Day, folksy Windrip declares martial law, relegates the Supreme Court and Congress to advisory status, and unlooses his armed “Minute Men” militia upon the country. American citizens who protest are sent to labor camps while Windrip systematically scapegoats Jews, blacks, and women for the nation’s troubles.

One of the key conceits of It Can’t Happen Here is that American fascism will be cloaked in different trappings than we saw in Europe. If it rises in the U.S according to Lewis, it will do so draped in militant Christianity and fronted by a candidate boasting a “folksy,” tell-it-like-it-is manner.

Windrip’s folksy characteristics purposefully align him with the poorly educated “common men” who support him. Like them, he has a disregard for learning and flaunts a no-nothing attitude. For instance, Windrip decries diplomacy, calling it “talky-talk” and notes that America is only “wasting our time at Geneva.” When he complains and bullies the press, he refers to journalists as “wishily-washily liberal.”

The new President of It Can’t Happen Here also derides so-called elites in other ways. He dislikes “haughty megapolises” such as New York, and to assure that the intelligentsia doesn’t get out of hand he even re-writes college curricula to be “entirely practical and modern, free of all snobbish tradition.”

Very significantly, Windrip’s platform demands the absolute freedom of religious worship, and targets certain demographics.  Women, for instance, may work as nurses or in other “feminine” settings such as “beauty parlors,” but otherwise must return to the home to raise children.

African-Americans, meanwhile, are to prohibited from “voting, holding public office, practicing law, medicine, or teaching any class above the grade of grammar school.”
As mentioned above, absolute freedom of religious worship is protected in Windrip’s America, but there’s an important caveat. No atheist, Jew, or “believer in Black Magic” shall be able to hold office until first swearing allegiance to the New Testament.   In other words, you have to be a Christian to enjoy absolute religious freedom in Windrip’s America.
Fascism thrives, as Lewis’s timeless book suggests, when there is an enemy to hate, and an “inferior” to lord it over.
.

Another Milestone for the Brownstoners