Another Milestone for the Brownstoners
Advertisement 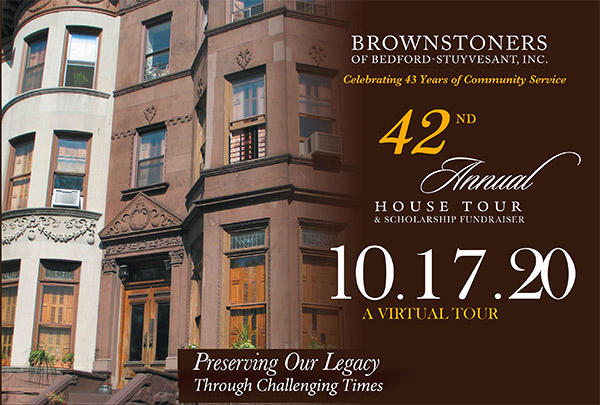 Over the past 40 years, the Brownstoners of Bedford-Stuyvesant have opened the doors of neighborhood homes to thousands of visitors through the annual Bedford-Stuyvesant House Tour – arguably New York State’s most beloved and sought-after tour of its kind. The event raises awareness of homeownership and neighborhood history, and funds for scholarships.
The beauty in those homes reflect the soul, character and genius of the Brownstoners, who never miss a detail, nor a beat, in making this event THE EVENT of autumn in New York.
The tours are self-guided and for most of those years started at the Old Boys High. The ticket stubs and tour journals became collector’s items. Many tourgoers, from afar and wide, boast of having attended every tour. Many run into old friends, or start new friendships. It is indeed the networking event promoting Bedford-Stuyvesant’s majesty, architecture, and ambient charm. Not to mention the prospects for purchasing properties.
Before the end of the 41st Tour, last October 2019, event planners were setting dates to meet in 2020 for this year’s 42nd. But in winter COVID dimmed the possibility of preliminary meetings, and by the beginning of summer closed the door on contagious crowd happenings, particularly indoors.
Yet, in the legacy mind-set of Tour-planners, this important community tradition had to be kept alive — despite the pandemic. And so, it is live and happening.
Rain or shine, the Brownstoner’s show goes on, this Saturday, October 17, when the 42nd annual Brownstoners of Bedford-Stuyvesant house tour goes virtual for the very first time. (Tickets can be purchased now at brownstonersofbedstuy.com for $15. The online event will take place on Zoom at a time to be announced. The optional first-time homebuyers’ seminar will be presented. The Zoom links for the tour and the seminar will be available to ticket holders on the morning of the event.)
In following the state regulations in the midst of the ongoing pandemic, adjustments were made and the beauty of the homes captured by cinematographer /director /film editor Brian Timmons (Britim Media), and massaged by the film production acumen of Brownstoners Cyrille Phillips, a media educator at John Jay College, with public health exec David Matthews handling project management.
We caught up with Matthews last night. And asked him about the challenges of putting on the Brownstoners’ first tour that was not in-person and less personal. He told us, the virus stopped everything, except the drive of the Brownstoners. “There was no real doubt that something would happen, but how it would happen didn’t occur until they did as the Brownstoners always do, got together and worked it out, pulling the best from each committee member.”
Matthews worked in management in the public health/social services arena for more than two decades so he knows a lot about managing with grace under pressure. Plus, he’s tech savvy.
“The obvious biggest challenge centered around doing a live tour virtually: it was the first time some Brownstoners had done an event this way.
“In past, it was always in-person, and centered around individuals opening their homes to the community. Now, it was like putting on an event they had never done before. It was a tough road to walk, it was challenging, but we were all driven.
“There are people who’ve never missed a tour, and then there’s the community. We just did not want to let anyone down. We felt we had to continue the legacy handed down from the original founders.”
“A big part was getting on the same page and figuring out what this was going to look like, and not one of us wanted to lose the traditional. We managed to meld together what was happening currently in social media, with how events like this were put together in the past.”
The group started planning in June, holding weekly meetings where Matthews emerged as the event manager to provide project direction. His Ad Hoc team focused on marketing promotions, the fiscal aspects and developing a plan as well as social media. “We got through it with tears, laughter, prayers. But we got through it TOGETHER!”
The committe found filmmaker/editor Brian Timmons, who worked on post-production for the popular “Property Brothers” series.
Pre-production coasted from there: “The footage is jaw-dropping, beautiful,” Matthews told us. “It exudes beauty and captures the soul of the neighborhood. It shows the blood, sweat and tears of the owners of these homes, within the historical context of the hard work they did to make their houses homes, from dealing with bad tenants and squatters to fires. All the stories are there in those properties, and in this neighborhood. The accompanying images captured by the video are fantastic.
“So many of the Brownstoners wanted it to be ‘just right’ and somehow we maintained that important flavor of Bed-Stuy. We completed it in October, end of first week, with Cyrille providing the lead on post-production. And what visitors will see on Saturday is a masterpiece. We were presented a final draft, that needed no editing.
“The original idea for the House Tour in 1978 was born out of the desire to introduce and reintroduce our beautiful community as a viable place to live, work, own a business and raise a family. This year’s theme, ‘Preserving Our Legacy Through Challenging Times’, pays homage to a vision of revitalization initiated by a few neighbors who were concerned about their struggling community. Saturday will be another milestone for the Brownstoners of Bed-Stuy.”
The Brownstoners are preparing ahead for the 43rd tour in 2021. The brownstonersofbedstuy.com website, notes: “The House Tour is an important tradition for the Bed-Stuy community, and as part of the Brownstoners mission, will prevail with the intentions of running in-person next year while maintaining a virtual component.”