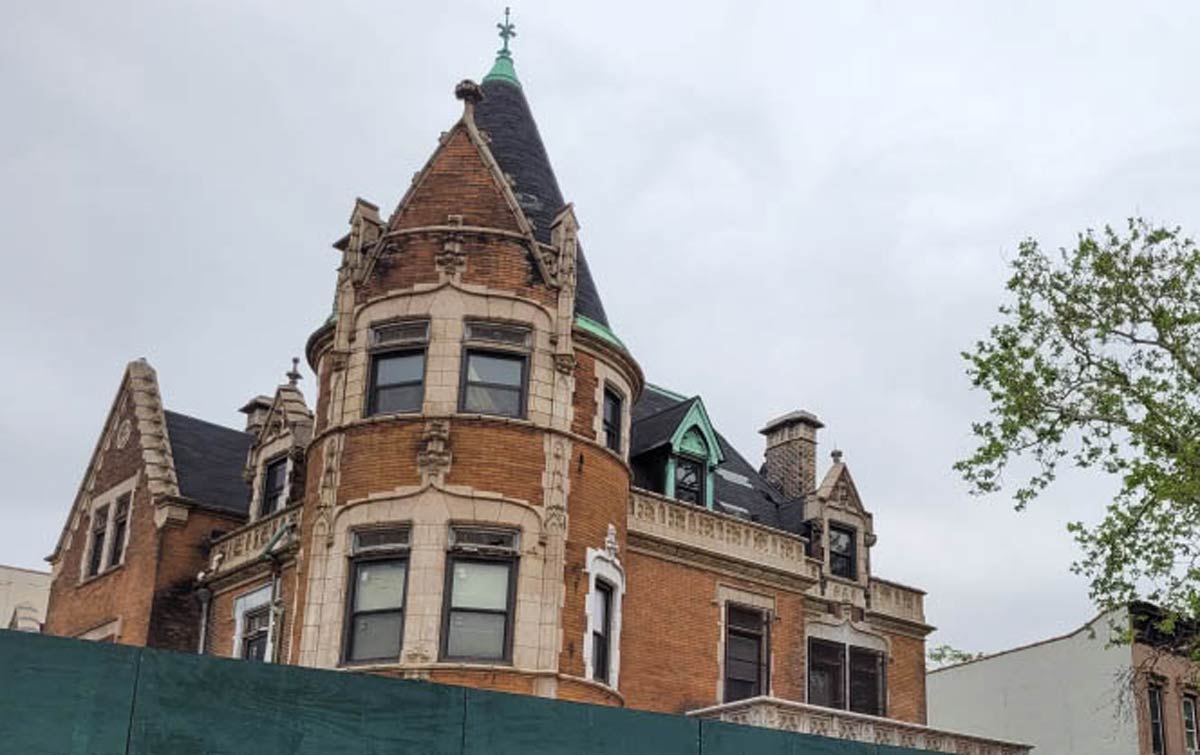 The landscape of Central Brooklyn is changing so rapidly one can hardly see the trees for the forest of developers’ tower lifts, scaffolding and industrial tarp protective barriers.

Architectural masterpieces, here today are vanished in favor of tik-tok lux, the next.

Even long-time residents of the north area may not have noticed the disappearance of one of Brooklyn’s tallest magnolias.  The “other one” that stood majestically in the courtyard of the now-defunct CABS Nursing Home at the south west corner of Dekalb & Nostrand– not the Lafayette Avenue Grandiflora of international fame.

Some neighbors call it the way they see it, preferring words like gentrification, erasure, displacement, vanishing and even replacement to the bland “change”.

Two blocks at the northeast corner of Nostrand & Willoughby (441 Willoughby Avenue), there’s more evidence of an evolution of sorts in real time. The “Masonic Temple on Willoughby” may be headed straight to something other than its function and away from its original form.

Construction on The Jacob Dangler House began in 1870 and was completed in 1902.  The Oriental Grand Chapter of the Eastern Star, an African American woman-led masonic group founded in 1850, purchased the building from descendants of the Dangler family, in 1967.

For many years, the mansion served the owner’s desire to be an event space for social functions, baby showers, birthdays, weddings, rites-of-passage celebrations, dances, award ceremonies.

Over the past several months local media outlets have followed the story of developers efforts to turn the building into condos, and the nearby community’s fierce fight to protect the French-Gothic limestone structure itself by having it landmarked. That way, its architectural integrity, its intended service to the community as an event space home away from home, and its history would be preserved.
While they “stave off developers,” the community is awaiting the decision from NYC Landmarks, residents also, it was reported last week, directed attention “ to saving as many parts of the property” as possible, and whatever valuable that’s left inside. Like copper roofing and blue stone.

Meanwhile, the “Brooklyn 360” developers are moving swiftly. Their petition for pre-demolition approval has passed approval, setting the stage for a “greenlighting” for further work.

Our Time Press’ visit to the site yesterday reveals that whatever’s valuable may not be inside anymore; and what’s salvageable already is what’s already saved:  memories of another space, in another time.

A kind site worker, putting up protective wood barriers on the building’s Willoughby entrance, told us there was nothing to photograph inside the building.  “Nothing. It’s an empty space. Nothing to take pictures of.”  We were totally fine to photograph the insides of what only can be called a cavern, based on his brief description. But for safety reasons, we didn’t force the issue, standing back to observe the “debris” clean-out.

As of yesterday, at 2:00pm, the original Order of the Eastern Star entrance sign is still intact.

But when we left Willoughby to head north down Nostrand to Myrtle, we found two other “things”: an iron gate painted — Basquiat-like — with names and tags of passersby or visitors.

We also intercepted a heavy wood cross headed to the trash heap.
If there is meaning to the discovery of a crucifix on its way to the trash heap as debris, it could be associated with the spirit of community advocacy in the 1200 petitioners advocating for the preservation of a mecca. The history of the mansion at 441 Willoughby is told exquisitely by the writer Suzanne Spellen at brownstoner.com. It is where a family lived for three generations, and where in the late 1960’s an organization born from African American entrepreneurial women ancestors (possibly some formerly enslaved) created a space for social exchange for a neighborhood.

Our Time Press intends to donate the relic to The Macon Public Library with the hopes that it is dedicated to the Order and the neighborhood who sought NYC Landmark designation to protect its architectural and cultural significance while preserving its unique history.

So, the significance of this effort is that if historic landmarking is approved for the building, it will not be torn down whatever the developers’ purposes. It will not become nothing more.

For more information, please visit, bkreader.com and PATCH.com. For a precise history of the building, Our Time Press recommends you read writer Suzanne Spellen’s column at: www.brownstoner.com/history/walkabout-the-jacob-dangler-house-on-willoughby-avenue.