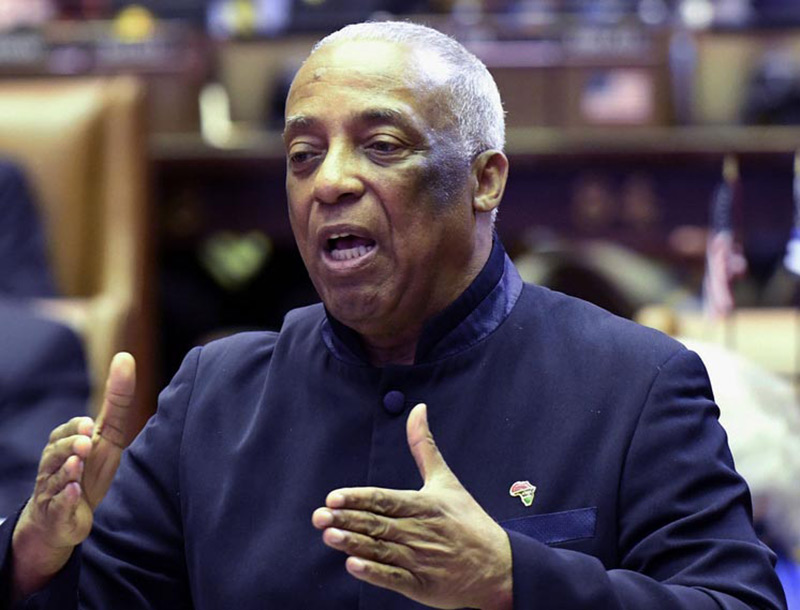 In last week’s Part 1, of our interview, Assemblyman Charles Barron spoke on the need for and relevance of, Black Power today. Here he gives examples.

OTP: You’ve anticipated my next question. How does your district reflect Black Power?

I would love for you to come out and I want to give you a tour of our district. You’ll see that East New York, the 60th Assembly District, is not gentrified. As a matter of fact, when I came in, 69% of the community was Black and 19 % was Latino. It is now 71% Black and 20% Latino. We have a decrease in the white population in East New York!
Two hundred people live in the shelter in a square-block radius on Alabama Avenue. There’s a two-story shelter that covered the entire area – two blocks, three blocks, around the whole square. They want to demolish that, build 300 new units of housing, and keep the shelter, [build a new one], and instead of two stories, it’ll go up 10 stories high. So it will only be on one block and the rest will be affordable housing. They have to get the okay of the City Council member, Inez Barron!
This is power! If the local city council member says no to that project, the City council is going to support her, and it cannot be built. The mayor wanted that project, the commissioner wanted that project – these are two powerful people, but it was the City Council Member Inez Barron, who had the power! The mayor said, ‘Councilmember Barron, I need to talk to you about it.’ She said, ‘I’ll speak to you. I’m in City Hall, let’s talk. I’ll have my husband come on by way of phone.’ He said, ‘No, I’ll come to you!’
And he came out to East New York to see Inez, and said, ‘What do I need to give your community in order for you to support this project?’ We said, ‘We don’t do quid pro quo. We’re not having another shelter built – not even a new shelter built on the property of an old shelter – and you do 300 units of housing. We’re not doing that, we’re already over-saturated.’ So, she said “no.’ He said, ‘Well, [the exisitng property] is a worn-down shelter.’ And she said, ‘Well if Health Home Inc. couldn’t take care of that shelter for 30 years, they shouldn’t get it. We got a house that’s almost 100 years old that’s doing well.’ So, he said, ‘Well, that’s just gonna stay. We said we would support a project that had 500 units of housing, not three, no new shelter, and move those people who are in the shelter into permanent housing!
We’ll support that. five hundred units, not 300 and then a 10-story new shelter… He left on Friday. Monday, the vote was about to come up for the project. We got a call and they said, ‘Guess what Barron? They’re caving in. There’ll be no shelter. They’ll support the 500 units of housing.’ That’s Black Power! And we did that with over 10,000 units of housing in East New York!
When the developer sits down with us and says, ‘We’re going to build affordable housing,’ we say, ‘Affordable to whom?’ And we define affordability. They say 80% of the AMI. You know, the area median income of New York City is $95,000.00 for a family of three. Eighty percent of that is $75,000. I asked the developer, “Well, what is my neighborhood AMI?” He said he didn’t know. I said, “Well, this meeting is terminated, because you’ve insulted my intelligence. How are you going to build affordable housing in a neighborhood [if] you don’t even know what the AMI is?”

So, I told him – this is what you’re going to build – or it’s not going to happen: Eighty percent of the units will be at 50% of the AMI or below, because that’s our $35,000, $36,000.00 for a family of three. That’s our AMI. Then we do have some people making $60,000 $70,000 and $80,000, so 15-20% will be at that level. And guess what? When I checked around East New York, we don’t have one market-rate housing unit in the neighborhood!
[Not one) that we signed onto in the 17 years we’ve been in office. Not one. Where can you get a studio apartment for $500 a month. A one-bedroom apartment for $700, two bedrooms for $800 to $900. Three bedrooms for $1,100.00 a month – [for people] making $25, 35, 45, 55 thousand dollars? In East New York.
I know you’re not going to like this, but I’m going to say it anyway – You can print it, or not print it. But Robert Cornegy caused some of the gentrification in Bed-Stuy. He signed onto projects where people would be making over 100% of the AMI, which is $95 thousand dollars, which 60-70% of the people are making that. He allowed that in. He allowed other things.
Next door to us, [Rafael] Espinal, who has the northern part of East New York – he and De Blasio came up with 6,000 units. Atlantic Avenue, Broadway Junction, and all that new stuff coming in there. Eighty percent of that is higher than the income level of East New York. That northern part is gentrified. And I can sit here and name you – Laurie Cumbo allowed gentrification in the Crown Heights area and allowed stuff to go up to 15, 20, 30 stories. These elected officials are responsible for some of the gentrification that’s occurring in our neighborhoods.
And I’ll close on that with this: I was looking at Atlanta, down south, the year 2000. Atlanta used to be almost 80% Black. 60-80% Black. Under the leadership of a Black mayor and a Black city councilman, Atlanta had 15 City Council members in 2000, 13 were Black and two were white. Now, under Black elected leadership, Atlanta is 52% Black and of its 15 council members, seven are white, seven are Black, and one is Latino. That’s gentrification, allowed by Black faces in high places who don’t exercise their power for their people. But they exercise it for the developers and the white executives, like mayors and presidents and governors, who want the city turned over to white developers.
Part 3 Next Week

Advertisement
Related Topics:charles barron
Up Next