In Brooklyn, Signs of the Times
Advertisement 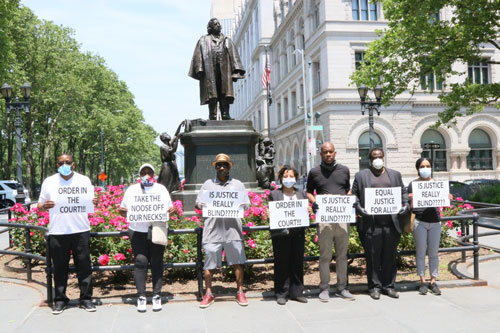 Members of the Brooklyn Anti-Violence Coalition organization of activist-leaders gathered in front of The Henry Ward Beecher Monument, at the request of Our Time Press, yesterday. The intention was to underscore the changing perception – and shifting currents — of leadership in America as well as to document a peaceful protest and press conference called by the group.
The press conference was to condemn the recent heinous, despicable act of a court officer who posted on Facebook lynching images of President Barack Obama and former Secretary of State Hilary Clinton.
Speakers, including BAVC founder Taharka Robinson and President Bruce Green, noted how the pandemic of racism wends through the American systems as strong today as in 19th century America when orator/abolitionist Beecher extolled his views on then-liberal causes of the day.
The session attended by broadcast and print press took place a few feet from the Supreme Court of Kings County, now demeaned by the act of a civil servant. The protestors said she should be fired, not put on leave at taxpayers’ expense. (BG)