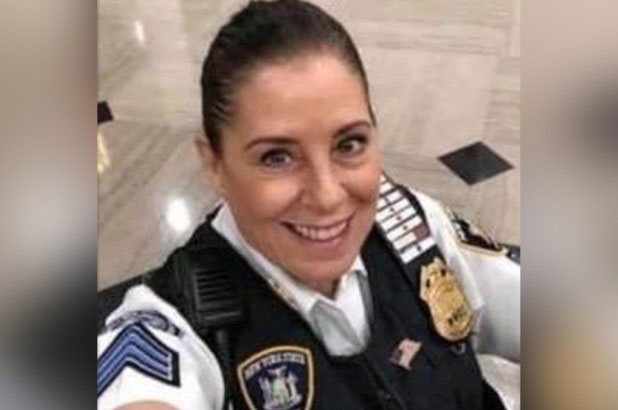 A court officer in Brooklyn was suspended without pay for 30 days after she posted a photo of former President Barack Obama hanging from a noose on Facebook.
A coworker of Sergeant Terri Pinto Napolitano says she should be fired for the offensive and racist post. The image Napolitano posted only not only showed Obama being lynched and the caption “we will not yield … your day is coming traitor,” but it also showed Hillary Clinton about to be hanged with the caption “it’s not over till the fat lady swings.”
The post quickly spread, disgusting Napolitano co-workers who called her vile and racist.
A court officer who has worked with Napolitano and asked not to be identified told NBC New York that the Sergeant was a known racist and would “harass minority defendants inside her courtroom when she was bored by yelling loudly at them for talking, disrupting court proceedings, while speaking to Caucasian defendants in a completely different demeanor.”
“She’s a disgrace to the many of us who respect the public and the integrity of our job and respect the criminal justice system and process,” the officer said.
Chief Judge of the Courts Janet DiFiore wrote a scathing letter referencing Napolitano and called the post “abhorrent.”
“This conduct is abhorrent, by anyone, at any time, and under any circumstances. But at this critical moment in our history – when our nation is reeling from the death of George Floyd and its aftermath – it is a sickening and unpardonable offense against every colleague in our court system as well as the vast and diverse public that we serve,” DiFiore said.
The court officer’s union is also not supporting Napolitano, saying on Facebook that her post was racist.
Napolitano’s Facebook page has since been deleted, attempts to reach her for comment have been unsuccessful.
The court’s Inspector General says investigators are reviewing the post and considering further disciplinary action.
Copyright NBC New York

In Brooklyn, Signs of the Times