“However Long It Takes”
Advertisement 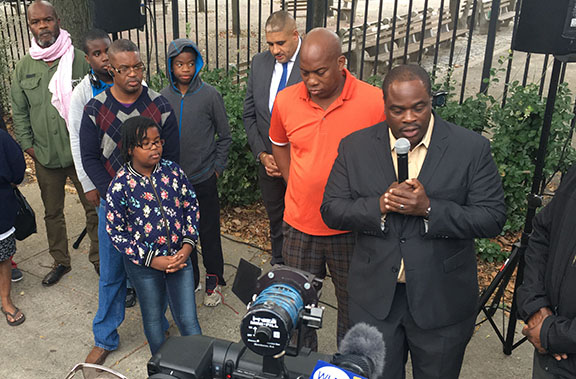 “However Long It Takes”: The Rev. Taharka Robinson (far right), a founder of the Brooklyn Anti-Violence Coalition, addressed neighbors and supporters of an elderly couple attacked by home invaders. Standing with Rev. Taharka is Bruce Green, President, BAVC, (second from right); Bishop Ishmael Claudio, President, 82nd Precinct Council (third from right) and community residents. “The intruders who caused the death of 91-year-old Waldiman Thompson, and tied up his wife of 30 years, Ethline, herself 100, in their brownstone on Decatur Street in Bedford-Stuyvesant, will be caught, however long it takes,” said The Rev. Taharka, speaking at a prayer vigil across from the crime scene.

The NYPD is offering a $10,000 reward for information leading to the arrest and conviction related to the October 11 home invasion. Anyone with information to this crime is asked to call the NYPD’s Crime Stopper’s Hotline at 800-577-TIPS.
Four men had stormed into the home around 3:30 p.m. on Wednesday, tied up Waldiman Thompson and his wife, Ethlin, and put a sheet over their heads while they went through the house, police said.
The suspects fled after taking property, cops said.
Ethlin eventually freed herself and called 911, police said, meeting officers at the door and telling them her husband was still tied up inside.
Mr. Thompson was pronounced dead at Interfaith Medical Center, police revealed. The medical examiner’s office ruled his death a homicide, citing sudden cardiac arrest. Ethlin Thompson was treated at NYC Health + Hospitals/Kings County for marks on her legs from being tied up, police said.
Brooklyn Borough President Eric Adams, called the home invasion a “heartless attack that has struck a blow deep in the soul of Brooklyn,” has put up a $1,000 reward for information that leads to an arrest and indictment in the case.
So far, there have been no arrests and the investigation is ongoing, police said.
Rev. Taharka reminded Thompson’s neighbors and supporters that it took ten years of activism and police work to find and charge the killer of Chanel Petro-Nixon, 16, and they would keep up the same activism around this “most heinous” crime.
Funeral Arrangements for Waldiman Thompson, 91

Telling Our Stories Through Griot Eyes