Horror in Buffalo, Turmoil in the Country
Advertisement 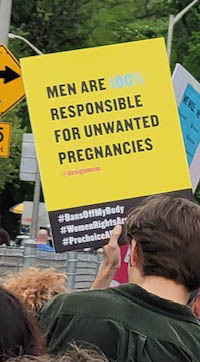 View From Here
By David Mark Greaves
The transcendent horror of 10 random people going about their day being killed in a terror attack by a white supremacist in a Buffalo supermarket, is one more ugly indication of the road the country is being dragged down. White supremacist rage and cruelty have been a part of the nation since its founding and the tears and grief it has brought to us now, is a reminder of the evil that Africans have endured since being kidnapped and shipped to the Americas. This it is why all of American history must be taught. So that we see what has been and recognize what is possible.

This fear of the White supremacists of the race being replaced, promulgated most publicly by Fox News and spread across the internet, can only be heightened by the sight of millions of white women marching to demand the right to millions of abortions. It must harden their stance and confirm their antiabortion fervor. The country is in for a very rough time with this one.

On Abortion
I was speaking with a LYFT driver, a Republican, about the coming overturning of Roe v Wade. We spoke for about 15 minutes, and it was not until later that I recognized that while spoke about the fetus and viability, heartbeats and trimesters, never once was the woman even mentioned by either of us.

I spoke with another man whom I’ve known for decades, and his feeling was that abortion was a decision between a woman the father and the doctor, with the final decision between the man and woman because they are “equal” participants. “How are you equal? She has to be pregnant for nine months, give birth, and care for a child, while you’re footloose ad fancy free.

How is that equal?” I couldn’t believe it when he said, “I never thought of it like that.” This is the problem with men deciding about abortion law. We have no idea what we’re talking about. It is each woman’s decision with her doctor and it’s outrageous to have the State take it away.

The White men of the Republican party have made a Putinesque blunder and I’d like to think they’ll be in for a surprise when the votes come back from those gerrymandered red districts. Wives and daughters may tell there MAGA husbands and brothers one thing to avoid abuse, but when they get in the booth, I would not be surprised if the pro-choice candidate gets their vote. Especially when they hear contraceptives could be outlawed as well. And the man who just heard from his girlfriend or wife how this vote could change every thought he had for the future; he will color the box next to the candidate that will leave his life alone. This November elections can either be the anticipated party-in-control switch, or a reaction to unusual times demanding unusual solutions. I may be a hopeless optimist, but if we work at it, I think this could be a big Democratic election.

And because of their hubris and manly ignorance in trying to control women’s lives, combined with the nominating of authoritarian candidates, the Republicans may lose the House and the Senate. They could see Roe v. Wade codified, the John Lewis Equal Voting Rights Act passed, universal background checks for guns, climate legislation and more. The good news for the Republican base, is that if the Democrats win, they will benefit from the tax money clawed back from the one percent and used to improve the lives of people like them.

We must remain vigilant and stand together. because like Putin, the supremacists and nationalists are authoritarian bullies and they will not stop on their own accord. And as we’ve just seen in Buffalo, there is nothing they are not capable of. And our responsibility at this time in the country’s history is to stop them and save our democracy and the world.