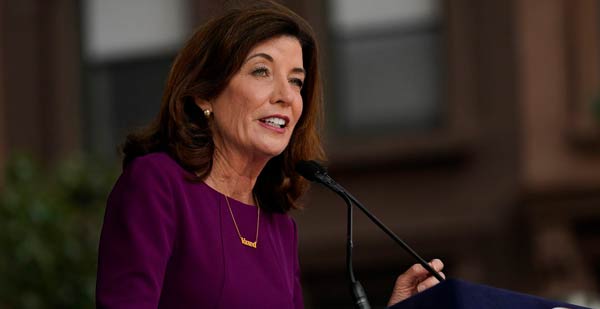 Steve Bittenbender
The Center Square contributor
Washington Examiner
With the state’s moratorium on evictions ending at midnight Tuesday, Gov. Kathy Hochul signed a proclamation Tuesday evening to call state lawmakers into a special session starting Wednesday and address what she called a crisis for both renters and small business owners.

In Albany, lawmakers will work to extend the moratorium until Jan. 15. They also will tackle an issue the U.S. Supreme Court had with the legislation. Earlier this month, the country’s top court struck down a provision it said failed to give property owners due process since the law allowed renters to self-certify a financial hardship.
The expiring moratorium and legal challenge are just two of the issues New York faces in dealing with renters and landlords. The state has also struggled to get more than $2.7 billion in federal Emergency Rental Assistance Program (ERAP) funding to tenants and landlords.

“We’re not going to abandon our neighbors in need,” she said.
Bans on evictions during the COVID-19 pandemic have been in place for nearly 18 months. They’ve remained for a couple of reasons. One, the U.S. Centers for Disease Control and Prevention cite mass evictions as having the potential to worsen the spread of the virus, especially in communities experiencing high transmission rates. In addition, elected officials and lawmakers have sought to protect people whose livelihoods and income have been impacted by the pandemic.

With Democrats holding supermajorities in both chambers, the legislation extending the moratorium is likely to pass. However, that did not stop Republicans from calling for a different approach.

In a news conference Tuesday in Syracuse, Senate Minority Leader Rob Ortt, R-North Tonawanda, and state Sen. Pam Helming, R-Canandaigua, slammed the proposed extension as well as the state’s inability to successfully get needed funds to tenants and property owners.

Ortt said Democrats have made the rent-relief program more onerous by making it difficult for people to file for relief. Those challenges will remain, and even months from now, it will likely still keep renters and landlords from being made whole.
“All you’re doing is punting and trying to convince voters you’re scoring a touchdown,” Ortt said about the latest extension plan.
Helming, who serves as the ranking member on the Senate Housing, Construction and Community Development Committee, called on legislative leaders to send S6481 to the governor’s office. The bipartisan bill, which she sponsored with state Sens. Brian Kavanagh, D-Manhattan; James Gaughran, D-Northport; and Andrew Gounardes, D-Brooklyn, would allocate $100 million in ERAP funding for “mom-and-pop” landlords who had tenants abandon units while still owing back rent.

“The distribution of these funds must be a priority,” she said Tuesday.
Hochul on Tuesday evening noted the issue is a “small business crisis” as well. Owners of such places as nail salons and bodegas, she explained, often rent out the rooms above their shops for extra income – money some have not received in more than a year.

Only a small fraction of the ERAP funds have been allocated as state officials have noted challenges in getting applications completed. That includes getting information from landlords and property owners so renters’ requests for funding can be processed.

Hochul previously has pledged more money to improve outreach and education about the assistance program. On Tuesday, she said the state will implement a “SWAT team approach” to help get applications completed.
“We have a lot of workers,” she said. “We’ll hire people. We’ll send them door to door.”

We’ll work with the city of New York and all the cities in particular in partnership and find out how we can literally take the information to people’s doors… There’s been a real problem. There’s money to be had.”

Earlier in the day, Housing Justice for All organized a protest with hundreds of people marching to Hochul’s New York City office to demand an extension until June 2022. In a letter released Monday, supporters and organizers said renters across the state owe more than $3.2 billion in back rent. Many of those behind are minorities and undocumented workers, they said, and they slammed ERAP as a disaster with an application process that demands too much time, resources and information for the people who need aid.

The protest did not sit well with the Rent Stabilization Association (RSA). The New York City group represents 25,000 property owners who combine to own more than a million apartments that provide housing for 2.5 million New Yorkers.
In a statement, RSA President Joseph Strasburg said some have “weaponized the eviction moratorium” and sought ways to extend it. However, the “disingenuous” demonstrations do not really help people who have legitimate needs.
“Instead of creating a false narrative of mass eviction and orchestrating fear-mongering street marches, their efforts should focus on helping their most vulnerable constituents apply to the state’s federally-funded Emergency Rental Assistance Program,” Strasburg said. “We all want the same thing – tenants safe in their homes and a rent stream that enables landlords to provide affordable housing.”

R Kelly’s trial begins today, and Black women are supposed to be grateful – But I Refuse