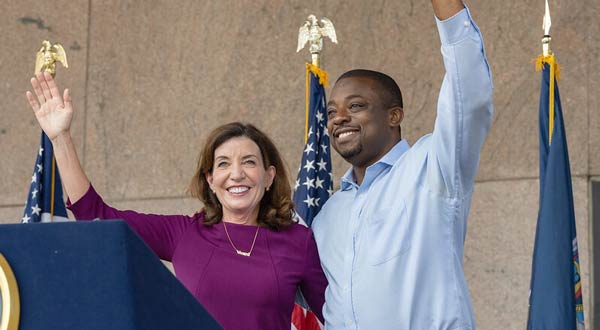 Jon Campbell, NYS Team
democratandchronicle.com
Brian Benjamin was born in the famed Manhattan neighborhood in 1976, to a Caribbean mother who moved there to start a new life. He returned post-college, after receiving degrees from Harvard and Brown. And since 2017, he’s represented Harlem — his home — in the state Senate.

So when it came time to choose a location for Gov. Kathy Hochul to introduce him as her pick to be New York’s new lieutenant governor, there was no other choice.
“Some people think you learn things when you go to Brown and Harvard,” Benjamin said Thursday in front of a raucous Harlem crowd. “They don’t know anything until you come to Harlem. That’s where you learn what’s really going on.”

Benjamin, a Democrat, will officially be sworn in as New York lieutenant governor after Labor Day, putting him a heartbeat away from the state’s highest executive office and giving Hochul’s administration a foothold in densely populated New York City.

Hochul, who took office Tuesday after Gov. Andrew Cuomo resigned amid scandal, officially introduced Benjamin as her lieutenant governor choice Thursday afternoon.
She was joined by two pillars of Harlem, the Rev. Al Sharpton and Hazel Dukes, president of the NAACP’s New York chapter, both of whom praised her selection of Benjamin.

“I want to thank the entire village of Harlem for creating this amazing young man who’s going to help us lead the state into better days and great prosperity,” Hochul said of Benjamin. “Thank you, my friend, for saying yes.”

Lieutenant governor is next in line
In New York’s governance structure, the lieutenant governor has few constitutional responsibilities, aside from presiding over the Senate and breaking ties in certain procedural votes.