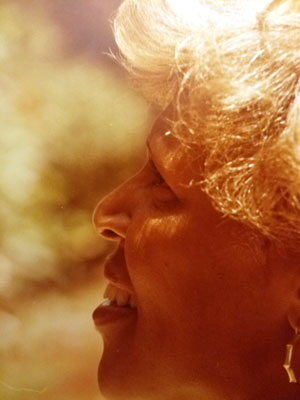 Story in Words and Images

When we talk about the people who infuse Bedford-Stuyvesant with life, we generally refer to publicly known figures.

In October, the community annually shows its appreciation to those in the background by casting a light there through such events as Bed-Stuy Alive and this year’s celebration of the 50th anniversary of Stuyvesant Heights. The late Esther J. Arrington whose family still lives in the Chauncey Street house her parents purchased decades ago, was one such unheralded ground breaker in the medical/crime imvestigations profession– a pioneer in our midst. She also was a mother, community leader and friend. And she impacted the community in ways that served families here and beyond while staying true to her callings.

Mrs. Arrington passed in February. We got to know of her in September when a chance encounter at Peaches’ Restaurant in Clinton Hill brought the late matriarch’s story to us. We reached out to Ms. Arrington’s daughter, writer Diane Collins, and our journey to get to know more about her mom began. Last month, Diane Collins shared words and photos. This week, Diane shares a biographical sketch with words from a family friend, Ms. Lettie Marie Hamilton.

Esther J. Arrington was born in Harlem to Vincent and Violet Hendy. A few years before her birth, The Hendys arrived in New York City by ship from Barbados carrying messages of survival willed from one generation to the next: the importance of education and family; the power of owning your own, through business and property; and the payoffs from investing wisely in those messages. In 1939, the Hendy family left Harlem for Brooklyn’s Stuyvesant Heights, settling on Chauncey across the street from Fulton Park.

Mrs. Arrington attended New York City schools, poised and ready for the future. A turn of events led her to become a single parent, raising three daughters. But “plight” was not part of Mrs. Arrington’s lexicon. There was another message from her Basian roots: hold your own! And she did. In 1956, Ms. Arrington graduated from the Brooklyn YWCA as a Licensed and Practical Nurse for the New York City Department of Hospitals, where she worked until 1961. Yearning for a career switch she resigned from hospital work to become a New York City Corrections officer, one of the first Black women to enter that field.
Fourteen years later, in 1970, Ms. Arrington left Corrections to return to school, enrolling in a program at Long Island University to become a Physician’s Assistant– a new field at the time. Her LIU class was the second in New York State to graduate physician assistantships. Ms. Arrington continued her education and in 1979 received a Bachelor of Science from SUNY.

Esther Arrington made history in the medical field when Beekman Downtown Hospital immediately hired her as its very first Physician’s Assistant. She enjoyed the work, and remained at Beekman for 10 years. In 1989, law enforcement experience intersected with Ms. Arrington’s medical studies, penchant for deep research and problem solving. She returned to serve the City as a Medicolegal Investigator with the Office of the Chief of Medical Examiners, headed by Charles Hirsch, among the visionaries who first championed the application of DNA in forensics science. Hirsch also oversaw the identification of victims from the September 11th World Trade Center attacks in 2001. And on his core team was Arrington At that time she was the only African-American female investigator for the Medical Examiners Office in NYC.

Trained by NYPD in forensics and crime scene evaluations in the 90’s, Arrington’s crime scene role in real life, predates all the the hard Crime Scene television and cable shows. Her real-life experience could have been a model for some of those “reel” script plots. She was on the scene first in the history of crime-scene investigations. From 1995 until 2000 she investigated and followed up on Sudden Infant Death cases in Brooklyn, and from 1999 until 2002, she was in charge of DNA specimen collection for the Brooklyn Department of Probation.

As dark as her work world could get, there was no room for shade in Esther Jackson’s private off-hours life, especially whe she was in the company of family and friends, like her bestie, Ms. Lettie Marie Hamilton. ” ‘Bunny’ had a heart as big as all outdoors!” Ms. Lettie told Our Time Press in a phone interview. “She told me, ‘you’re the sister I never had.’ She could see things in a way that that made you see the same things much clearer, she made you know life wasn’t so bad — no matter what. She had a great mind; whatever a doctor could so, she could do. And she could say some very funny things, and she was down to earth. Such a giver she was! A lady Santa Claus! She also could be down-to-earth and serious when she needed to be.

“One day we were driving along and she told me about her work. She said she felt bad for people who didn’t have families. She told me about working with people with AIDS in the very beginning of its onslaught. Nobody wanted to work with the victims, but she told me, ‘God didn’t allow me to be afraid. The other medical thought I was being careless when I touched AIDS patients. But to be a good nurse, you must touch people and show compassion.’ She was sweet. She knew her job and she was thorough. But she could be so funny!

“I remember one of the things she said about us getting older: ‘If it wasn’t for doctors’ appointments we wouldn’t have much of a social life.’ “

Ms. Lettie told us that as exciting as Esther Arrington’s career was to her, the world Ms. Esther loved most was “filled with life, light and laughter” — far away from the darker side. Reading, traveling, being with family and friends; following the development of her grand children and great grands; plus always sharing her stories. And herself.

Part III of this three-part series, scheduled for October 21 placement in OTP features Mrs. Arrington’s
grandchildren sharing their impressions of their beloved grandmother; her legacy and her gifts.