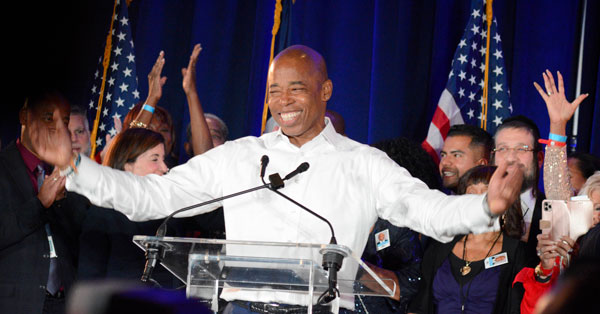 “Tonight Is Not Just a Victory Over Adversity,
It Is a Vindication of Faith”

By Maitefa Angaza
The second Black mayor in New York City history was swept into office on a landslide Tuesday night, with Associated Press calling the victory less than 20 minutes after the polls closed. Just a few minutes later came the announcements that Jumaane Williams had secured his seat as Public Advocate for a second term and that Brad Lander is the city’s new Comptroller. Antonio Reynoso’s win as Brooklyn borough president was announced shortly after. This amounts to a Brooklyn run of all three of the citywide seats in play.

Election night was, in a word—consequential this year. Pretty quickly as the night moved on, the picture of an altered New York City came into view. Manhattan got its first Black district attorney in Alvin Bragg, and Vanessa Gibson is the first Black woman to be elected Bronx Borough President. Young Socialist Democrat India Walton made history when she beat the incumbent Bryan Brown in the Democratic primary, much to the shock of the party. It declined to endorse her or lend any financial support and Brown won as a write-in candidate with money from deep-pocketed supporters.

Speaking of making history — women literally owned the New York City council race in this year when all 51 Council seats were in play, with 35 mandated term-limits vacancies. Women now hold 31 of the 51 seats, making their mark in breathtaking fashion, inspiring many to wonder what impact a woman-run Council might have. Among those comprising the takeover was Rita Joseph, who participated in the candidates’ forums presented last spring by Our Time Press, as did Chi Osse, a young man emblematic of the intrepid talent in the new City Council.

Of course, the star of the evening was Mayor Elect Eric Adams, who energized the crowd of supporters at the Brooklyn Marriott and likely many viewers across the city. He spoke of his quite humble beginnings as one of seven children of a hard-working single mother, including the days he and his siblings would carry their clothes with them to school in garbage bags, for fear the city Marshall might evict them while they were away from the apartment, putting their clothes and other belongings on the street.

“For a young man from South Jamaica, Queens, who grew up with all of the challenges that every New Yorker faces,” said Adams, “tonight is not just a victory over adversity, it is a vindication of faith. It is a proof that people of this city will love you if you love them. It is the proof that the forgotten can be the future. It is the proof that this city can live up to its promise.”
The jury is still out on at least one of Adams’ remarks. His comments on shared responsibility rankled activists who questioned both his logic and his memory.

“Listen folks, he said. “We have to get this out of our head: that our C.E.O.s in this city don’t want to participate in the uplifting of our inner city. The problem is we haven’t gone there and asked them to do so. So, it’s time to build bridges that we’ve destroyed in the past. We need each other.”
It was reported that there was no shortage of corporate execs in the room at The Marriott, but activists say they have long given up on expecting most corporate interests based in the city to give sufficient thought or assistance to those in need. And as this remark was unsettling to some, others were said to be discomforted by his plans to meet with gang members in an effort to stem gun violence.

And members of the NYPD may not have been thrilled with this declaration from the former police captain:
“I washed dishes. I was beaten by police and sat in their precinct holding cells, certain that my future was already decided, and now I will be the person in charge of that precinct and every other precinct in the City of New York because I’m going to be the mayor of the City of New York.”
Bragg, is also vowing to take on police accountability. A civil rights lawyer and former federal prosecutor, the new Manhattan DA will also inherit the investigations and prosecutions of Donald Trump initiated by Cyrus Vance, Jr.. He says he’ll immediately begin enacting the sweeping reforms outlined in his campaign’s audacious Day 1 Memo. This would change life for a lot of people encountering the judicial and penal systems in Manhattan, victims of sex crimes, everyday citizens with parking violations, finally stem the flow of guns into the city and much more. The push to de-carcerate Rikers Island is one of his key objectives. In his acceptance speech he said, “We have been given a profound trust tonight… The fundamental role of the district attorney is to guarantee both fairness and safety.”

Williams, Lander and Reynoso gathered to address their supporters and the city at a shared victory party. It’s yet to be seen if Williams will continue exploring a run for governor now that Attorney General Tish James is in the race and Mayor Bill De Blasio is considering trying his luck (which critics say has run out).

Lander, a progressive and longtime Park Slope representative said as comptroller, he will be focused on how the City’s money is invested. He posted the roster of his 39-person transition team on Twitter Wednesday morning. It includes Mark Winston Griffith, founder of The Movement Center in Bedford Stuyvesant. At his victory celebration he said, “We are going to carry our city forward in a way that is more just and equitable and sustainable,”
Reynoso spoke of his humble beginnings and his pride and faith in Brooklyn.
One surprise to most was the election of Kamillah Hanks as the first Black City Council Member to represent Staten Island. She’s not much known outside of the borough, but it’s likely she beat out opponents there with a campaign supported by the NYPD, which stated during her campaign, “New York City police officers need strong allies like Kamillah in the City Council who will support us in the difficult, dangerous work we do to protect all New Yorkers.”
Her victory in the City’s most conservative borough was still a surprise. And as stated, this was not a dull election evening.

There Were Five Ballot Proposals On The 2021 General Election Ballot